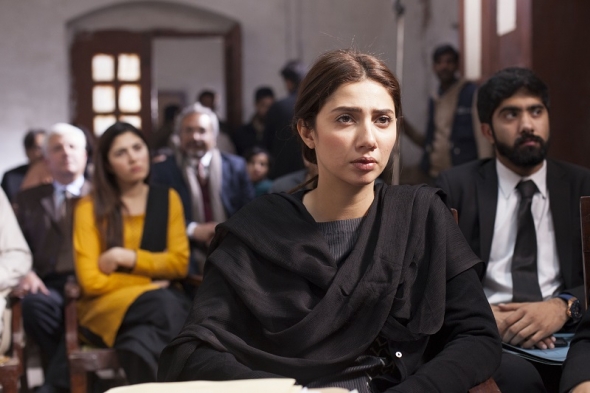 Her latest film, ‘Verna’, has been attracting headlines both in Pakistan and India, courting controversy and stirring the authorities in Pakistan who appeared to have slapped it with a ban – all because it deals with the subject of rape.

Chatty and charming, the star, who was recently appointed a L’Oreal ambassador, told www.asianculturevulture.com on the phone from Pakistan, why she really wanted to make ‘Verna’, and highlight the issue of sexual abuse and harassment, discussing the issue of vulnerability in the wake of the Harvey Weinstein scandal; her pride at being Pakistan’s first L’Oreal ambassador (joining the ranks of Bollywood stars Aishwarya Rai and Sonam Kapoor); and her love for her Indian fans.

But first ‘Verna’ and why she was so keen to do a film that you might not normally expect of a glamourous, globe-trotting L’Oreal ambassador, who has two million followers on Instagram.

Khan told www.asianculturevulture.com that the script and the character spoke to her in a way that other projects did not.

“There were a bunch of films I was considering,” she explained, “and two of them I was about to say yes to, and they were very commercial.

“But when I read this, I thought will I ever get this opportunity again?

“You spend six months to a year making and promoting a film and you want to do something where your heart lies.”

The film sees her reunited with the director who gave her first feature film break, Shoaib Mansoor.

His film, ‘Bol’ (2011) another woman-centred drama was both critically acclaimed and did well at the box office and is credited with reviving Pakistani cinema at a time of uncertainty and pessimism about the film industry there.

Khan said it was not loyalty to Mansoor that swung it but the quality of the script.

“Something in the script grabbed me,” she told acv.

“So obviously this was Shoaib Mansoor but it wasn’t about loyalty, I don’t look at it that way at all, I don’t feel indebted.

“What I do feel, is that this man who took me for a small part (in Bol) and that after six years, he wanted to make a film with me as the main protagonist.

“This is really saying she did something right, but I hadn’t even heard from him, he didn’t stay in touch.”

More directly, it was a statement of faith that she could carry a difficult and challenging part.

‘Sara’, Khan’s character, is a well-to-do young woman who falls in love with a polio-stricken musician Aami (played by music star Haroon Shahid in his first feature role), but their romantic idyll is shattered by another man’s entry into their lives. The trailer hints at that much and Sara’s nightmare unfolds.

The trailer has been registering hits from across the globe and should easily cross the two million mark, ahead of the film’s release in the UK tomorrow (November 17).

Khan revealed: “I haven’t been through the kind of violence she’s been through and that is not something I could relate to. I had to sit down (as a character) and say this is what has happened to me.

“I would tell them to tie the rope tighter, so I could feel the pain, I don’t know that pain and couldn’t go back to a memory.”

As ‘Verna’ is about a woman and her vulnerability, especially when faced with a powerful and insistent man, acv posed the question whether Khan had ever experienced anything uncomfortable as an actress.

The Harvey Weinstein allegations of sexual misconduct have reverberated globally and in pretty much every sphere of working environment.

“Never. Let me tell you, I have never seen it with my own eyes, powerful men in this industry trying to be fresh with women – but I am dead sure it exists – it happens in every industry, the power dynamics which is what this is about, occurs in every single industry.”

She is well aware of her own image and standing – last month some pictures of her smoking and in a short dress and sharing a moment with Bollywood star Ranbir Kapoor went viral and attracted a certain degree of opprobrium in some quarters.

She suggested that the responsibility of a being role model weighed on her and she continues to maintain a positive and responsible disposition.

“It’s an art form and as an actress, we will hug someone or maybe there will be romance on screen, but it is like any other profession, and to say that, we do have to set the right example.

“With our kind of society, it is tough but believe you me, it is getting better.

“I see so many young boys and girls coming into this field (acting), educated and it’s actually quite amazing, this amount of people – this sudden change has only got to do with the fact that parents and families are okay with their children going into this industry.”

Being a L’Oreal ambassador has another level of responsibility, she admitted.

Her appointment last month involved a trip to Paris and a shoot, but initially she didn’t appreciate just what it meant.

“When I got there, I thought this is amazing, the selection process and how they go through it. I am very excited about it and I hope that I can carry it well.”

She has a considerable following in India, not least because her appearance in ‘Raees’ last year alongside Bollywood icon Shah Rukh Khan catapulted to a new status – amid the brouhaha of Pakistani actors appearing in Indian films, as tensions over ‘cross-border terrorism’ ratcheted up between both governments. An industry ban on Pakistani actors working on Indian films remains.

Khan commented: “At this point the situation is such that it is not something that is viable for anybody.

“The thing is that with India and Pakistan, you know, it is always like that.

“I know I have a lot of fans, and I also have very close friends in India, and so to my all fans there, peace, and I hope things change, and I want them to know that I love them very openly and unabashedly.”