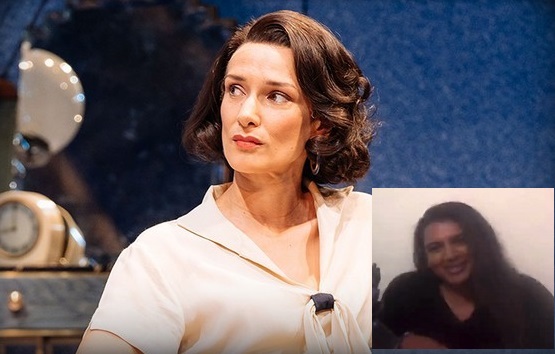 INDIRA VARMA expressed her surprise at winning an Olivier Award for Best Actress in a Supporting Role in the play, ‘Present Laughter’.

She said was “gobsmacked” reacting on Twitter last night after the announcement in a remote ceremony that was broadcast on ITV with compere Jason Manford hosting the show from the London Palladium.

The 1942 Noel Coward play is all about celebrity and featured Andrew Scott (the priest in ‘Fleabag 2’) in the lead role and was on at The Old Vic over last summer.

Another winner was actor Vaneeka Dadhria who was part of the ‘Cyrano De Bergerac’ production at The Playhouse Theatre which featured star James McAvoy in the lead. The play won in the Best Revival category.

Dadhria, who is also a beatboxer, collected the award and reacted on Instagram today: “My heart is full, and I’ve got so much love for the whole Cyrano gang…”

Last night with colleague Nima Taleghani, Dadhria collected the award on behalf of the Jamie Lloyd theatre company, which produced this work which ended its run near five-month run in February.

Taleghani’s acceptance speech – in the form of a rap/rhyming verse (as it is in the original) with Dadhria providing beatbox backing vocals – was declared the best acceptance speech of the night by Manford. The French classic was penned by Edward Rostand in 1897 – Lloyd, who directed, is widely regarded as one of the most innovative theatremakers of his generation – and this production was a contemporary rendering.

You can watch the acceptance speech below…

Director Milli Bhatia’s production of ‘The Seven Ways of Killing Kylie Jenner’ for The Royal Court Theatre in London was nominated in the Outstanding Achievement in Affliate Theatre category.