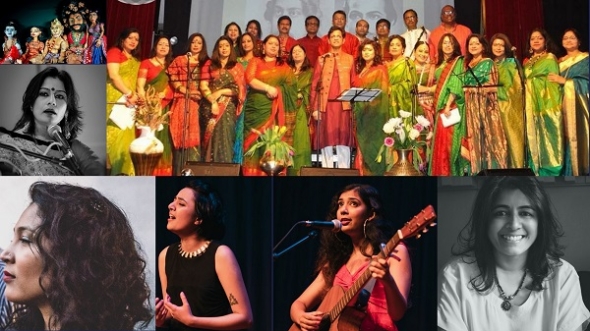 Showcasing some of the next generation – meeting and sharing…

A RATHER unusual and very wide-ranging festival putting women artists at the centre of it all begins tomorrow (November 5).

Called Women in the Arts Festival, it runs from November 5-December 12 and showcases 25 artists, 50 musicians and comprises of 18 concerts across 12 venues.

It is the 5th edition of Women in the Arts Festival and created by established music producer Jay Visvadeva and artistic director Sama Arts organisation.

“We know women find it difficult to establish careers in the arts, and music especially – I wanted to give them a platform and empower them.

“There is a lot of prejudice out there and it is a very male dominated music scene,” Visvadeva lamented to www.asianculturevulture.com.

“I also wanted to take this beyond London. Audiences in the capital are spoilt – we want to broaden interest outside London and people are very receptive, so we are going to Norwich, Kings Lynn, Cambridge, Winchester and Canterbury.

“I remember in 2019 at Norwich Arts Centre there was a 15-minute standing ovation for the quartet of singers. I’ve never had that,” added Visvadeva, who has been organising Indian classical concerts for some 45 years and many illustrious maestros to the UK.

“We are going back to Norwich. When people outside get to know about the talent in the community, it really helps and we are also showcasing young musicians who can build the audiences of the future.”

There are not just music and concerts, tomorrow’s (November 5) opening features panel discussions and an exhibition of visual art at Rich Mix in Shoreditch, London.

The Women in the Arts Festival will open with a keynote speech, and also has workshops looking at how women can make a career in the arts – and both artists and professionals will discuss how you forge making a living in the arts and how you progress and acquire the professional support and development you might need.

Award-winning composer Nainita Desai ( Royal Television society Award winner for ‘For Sama’ (2016), about a little girl growing up during the Syrian Civil War) who scores TV and film work will share experiences of working in what is traditionally a very male orientated business.

Exhibiting at Rix Mix tomorrow are also three painters. Anisha Samani is a painter who leans towards the abstract and likes to think of her work as poetry; Sangeeta Weatherley is also a painter great influenced and inspired by the outdoors and her exhibition is titled ‘Art that Connects’; while Anupa Sahdev is a mixed media artist who explores the imagination and in-between states and her work on display is themed as ‘The Imaginative Reality’.

At midday there will be a puppetry show and it tells the story of The Ramayana and conveys the story of Diwali itself which is being celebrated by Hindus in many parts of the world this week.

The opening day culminates in a concert featuring Sparsh Bajpai, a jazz and classical soprano and Saachi Sen, a poppy singer-songwriter.

On Saturday (November 6), the Women in Arts Festival hosts a Gala Diwali dinner dance concert in King’s Lynn. On the bill are Sanjukta Mitra who specialises in Khyal (a form and style of Indian classical music that is connected to poetry and romance); and sings songs composed by women; Gurdian Rayatt plays the tabla, while Gurbaksh Matharu is on esraj/tar shennai (stringed instrument) and Tonya Sheenson and Priti Gohel perform Kathak dance.

In London on the same day, Women in the Arts Festival celebrates Bollywood with Kalakar Arts UK presenting a concert of Hindustani Classical Music with famous tracks from Indian cinema.

Chandra Chakraborty and Chiranjeeb Chakraborty are both on vocals while accompaniment is provided by Sanju Sahal on tabla, with Kiran Thakrar on keys and dancers Indrani Datta and Jaymini Sahai performing to tunes.

Next week sees one of the set pieces of the whole festival with the Anandadhara Choir marking Bangladesh at 50. it was created as a new country in 1971. Female inspired and led, this will be an evening of songs and poetry and conceived by the women artists of Anandadhara Arts UK.

Another well-known outfit, Khiyo with Sohini Alam on vocals, perform at Grand Junction on Tuesday, November 30.

Among the other highlights are Mehtab Malhotra bringing the magic pf Urdu poetry through spoken word, music (Af Malhotra on tabla, Amer Khokar on harmonium, Pammi Singh on guitar), and traditional readings at Tara Theatre, in South London on Saturday, November 27; a concert that mixes the sound of the contemporary Jazz with Indian classical with Helen Anahita Wilson on piano, Shabaz Hussain on tabla and Alice Barron on violin – you can can see them on Thursday, December 2 in Canterbury. and there’s another chance to hear and enjoy singers Bajpai and Sen as they take to a stage in Winchester on Friday, December 3.

Alpana Sengupta, a leading exponent of Kathak, a north Indian dance form, performs a new piece, called ‘Love’ – alongside the poetry and songs of the great Rabindranath Tagore. Joey Sengupta reads and Sanjukta Mitra sings. The second half is devoted to something described as a ‘pure dance’ or ‘Nritta’, in which Alpana Sengupta presents different forms of footwork according to Teen Taal – a 16 beat cycle. This show takes place in Cambridge on Sunday, December 5.

The concerts’ strand of Women in the Arts festival culminate with ‘Forgotten Voices’ as women who don’t always get the spotlight they deserve take the main stage in Norwich at the Arts centre there.

Wome in the Arts closes with Deepa Hattagandy Karnad on Khyal vocals as she invites guest musicians to join her on Saturday, December 11.

The festival is supported by Arts Council England.

Listing
For full details of all the festival, see http://sama.co.uk/
Tomorrow Women in the Arts Festival opens at 10am and the panel discussions run till 6pm.
You can walk around the gallery space to see the artists’ work between 10am-10pm.
Sparsh Bajpai and Saachi Sen 7.30pm concert.
The Rich Mix Centre, 35-47 Bethnal Green Rd, London E1 6LA.