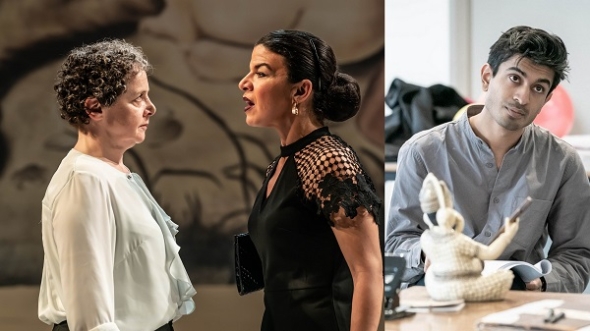 HE IS ONE OF THE STAGE’S 25 Theatre Makers To Watch out for in 2022 And Beyond – individuals selected by industry experts and The Stage’s own journalists – who will be shaping the creative sector for the next twenty-five years and taking theatre to the next level.

“It’s really nice to get recognition and it’s been a whirlwind journey,” he told www.asianculturevulture.com. “I was steadily working for five years and then recognition comes along. I had a mad ascent”.

He was at the Royal Exchange Theatre, Manchester as a trainee director and was propelled into directing a revival of Tanika Gupta’s adaption of ‘Hobson’s Choice’, because the nominated director, Pooja Ghai had to withdraw for personal reasons.

Gupta wrote a new version of her previous adaptation (2003) of Harold Brighouse’s 1916 comedy about a tailor with three very independently minded daughters, and set it amongst the Ugandan Asian community settled in Manchester’s Northern Quarter during the 1980s. (See below for more on this).

Since then his career has progressed, although the pandemic halted a few things. The current artistic director of Lyric Hammersmith, Rachel O’ Riordan had seen ‘Hobson’s Choice’ and invited him to direct, ‘Britannicus’ currently running at the venue until June 25.

“She was interested for me to do something in the new season.

“I read the play overnight, I found it very gripping. It read like a political thriller which felt very exciting,” he revealed.

“I was aware of (Jean) Racine’s work I had read him at university. He is not very much done in this country although he is a very popular playwright in France.”

He explained that Racine’s work suffers in the UK as having the stereotype of being quite static and long speechifying.

“I was interested in doing a version which I hope unlocked that thriller aspect. I think it’s like an episode of a big HBO drama as I felt it’s speaking to the personal foibles of people in power, such as Matt Hancock being caught on camera with his aide, or Partygate – and the image of Emperor Nero fiddling while Rome burns.”

In this translation by Timberlake Wertenbaker, drawn from Roman history, Britannicus is the son of the Roman emperor Claudius and his legal heir, while Nero is son from his fourth wife, Agrippina (Sirine Saba) who wants power as well as Britannicus’ fiancée Junia (Shyvonne Ahmmad).

There is a lot of Bollywood type melodrama in it – two brothers in love with the same woman, a mother who wants to control her son to keep power.

“I am always interested in melodrama – which sometimes can be used as a dirty word when people say things are ‘melodramatic’ they mean, they are over the top, but I do think the height of the emotions in the play, taken to that Bollywood level, if you want or Italian novella are almost like a soap opera basically, especially in this age of getting people back to the theatre, after a long time away, it’s good to tap into those emotions,” he added.

“I think particularly in the character of Agrippina for example who is usually played as a Margaret Thatcher figure. I was interested in working with Sirine Saba who is of Middle-Eastern heritage and bringing a non-western sensibility to the part,” he explained.

“I grew up in Italy so I wanted to bring some of that Roman/ Italian fire to it. So we talked about iconic Italian women such as Monica Bellucci. Ancient Rome is dominated by men and Agrippina stands out as a one of the most powerful women in that time.”

As a foil to her, Banerjee chose to cast a female actor, Helena Lymbery as Burrhus, an advisor and tutor to Nero.

“It’s another model of female power to exist in the play, and Nero being torn between these two mothers.”

The setting itself is very modern modelled on a UN Council Chamber meets Italian Palazzo, with a big tapestry of Romulus and Remus being suckled by a wolf, rounded off with a water cooler and chairs as a waiting room in contemporary seats of power.

Some audiences found the shuddering moments – when the characters enact convulsions in silent interludes and the moving of chairs, a bit odd, but Banerjee explained the empty chairs as a metaphor for characters who get referred to, but are never actually seen.

The shuddering moments are inspired by the work of Israeli choreographers, Ohad Naharin and Hofesh Shechter and the Godmother of them all, Pina Bausch, he explained. “It’s about trauma and repressed violence that characters are carrying in their bodies.”

Sadly, covid has meant that some performances were cancelled.

Banerjee was born in Oxford and his parents are from Kolkata (Calcutta). He grew up between UK and Florence, Italy. His dad, Anindya is an economist and was teaching there while his mum, Urmila De is also an academic, who trained as an art historian.

“My parents are a big influence on my work. Both from an academic perspective and being steeped in art and culture from a very young age: Western Culture but also Bengali and Indian culture as well. I am very grateful to them for taking me on that journey when I was growing up.”

He went on to study a degree in English at Trinity College, Cambridge, followed by a Master’s in Medieval and Renaissance Literature. He followed it with a Master’s in Theatre Directing at Birkbeck, University of London and then to the Royal Exchange Theatre, Manchester for his placement.

The 28-year-old has certainly made a refreshing impact on the theatre scene and will next go on to direct, ‘The Glass Menagerie’ at the Royal Exchange, Manchester (originally scheduled for 2020 and postponed because of the pandemic).

“It’s a play about memory, as one character says: ‘Time is the longest distance between two places’, so it feels fitting it’s a play about a return and it’s also a play about a family living in isolation while the world spins out of control around therm. If anything, the resonances are even greater in 2022 than they were in 2020. It’s one of the greatest plays ever written and it’s a treat to work on it.”

See below listing details for this forthcoming production.

All pictures: Courtesy of The Lyric Hammersmith and Marc Brenner