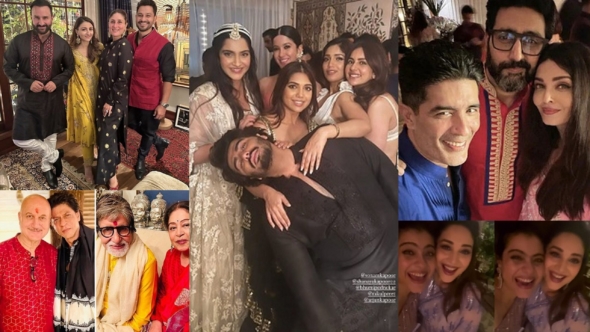 MUMBAI – and in all likelihood the whole country, has just celebrated Diwali like never before after a two-year pandemic gap.

Bollywood, which is known for its movies the world over, is big on parties.

In fact, a day after all these gala bashes, which happen on a regular basis but grow to massive proportions during Diwali, and ending with Christmas & New Year, Indian newspapers devote reams of pages to the star power attending these dos. The nation too keenly awaits these power packed parties year after year.

The season started with Ayushmann Khurrana and wife Tahira Kashyap’s Diwali bash on October 17. Khurrana had a stellar period just before the pandemic with ‘Article 15’ (2019) and ‘Andhadhun’ (2018).

Just a couple of days later, it was actress Kriti Sanon, who hosted a bash at her home for her ‘Bedhiya’ co-star Varun Dhawan and wife Natasha Dalal, Karan Johar, Neha Dhupia and husband Angad Bedi.

Kajol posted a video of herself dancing with Dixit at the party on Instagram and thanking her. Malhotra shared a picture on Instagram with Aishwarya Rai Bachchan sporting a pink kurti and Abhishek wearing a red kurta-pyjama designed by him. Tandon too shared pictures from the bash online.

On October 21, Bhumi Pednekar hosted a do and it was attended by Rajkummar Rao, Patralekhaa, Rakul Preet Singh, Jackky Bhagnani, Aryan Khan, Suhana Khan and Ajay Devgn’s daughter Nysa Devgan. Ekta Kapoor party at her Juhu bungalow had a mix of Bollywood as well as TV celebs.

Kapoor’s father, actor Jeetendra and his contemporary Rakesh Roshan were the first to walk in. Kangana Ranaut, Karan Johar, Shilpa Shetty, Taapsee Pannu and Disha Patani were also spotted.
Producer Anand Pandit’s party on October 22 was surprisingly high on glamour. In fact, the celebrity rollout started with the biggest name in the industry Amitabh Bachchan, who rarely makes it to these late night galas, walking the red carpet.

He was followed by biggies such as Hrithik Roshan, who attended in casuals unlike most who wore traditional attire, Akshay Kumar, Ajay Devgn and wife Kajol, Rakesh Roshan, Jeetendra, Ali Fazal, Shatrughan Sinha, Kapil Sharma and Manoj Bajpayee.

Annually, Bollywood’s biggest Diwali evening is hosted by Amitabh Bachchan at one of his bungalows. This year though the attendance didn’t live up to the expectations of many. Held on October 24 at the Bachchans’ Jalsa bungalow the party was attended by daughter-in-law Aishwarya Rai Bachchan and son Abhishek Bachchan, who welcomed most guests, daughter Shweta Bachchan granddaughters Navya Naveli Nanda and Aaradhya Bachchan, and friends Anupam Kher with wife Kirron Kher, Gauri Khan, Karan Johar, Sonali Bendre with husband Goldie Behl and Shah Rukh Khan.

Karan Johar, Janhvi Kapoor, Ananya Panday, Sara Ali Khan, Katrina Kaif, Arjun Kapoor, Vicky Kaushal, Suhana Khan were seen at multiple parties every day, sometimes switching from one bash to another on the same night. Just like the real fireworks in India during the festivities, it seems Bollywood too was on fire, just that the fireworks here were at the Diwali parties.

See you all next month…