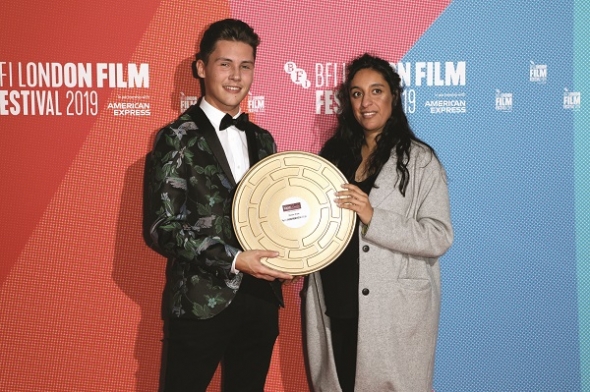 Documentary about 1970s anti-racism group has lessons for us all now, says Grierson jury president…

RUBIKA SHAH’S documentary film, ‘White Riot’ – which tells the story of the Rock Against Racism movement that sprung up to counter racism and fascism in the UK in the 1970s – has won the Grierson award.

This is presented to best film in the documentary competition section of the London Film Festival (LFF).

“Chronicling the movement’s grassroots beginnings in 1976 through to 1978’s huge anti-fascist carnival in East London’s Victoria Park, the film features interviews and previously unseen footage of X-Ray Spex, Steel Pulse and The Clash, whose rockstar charisma and gale-force conviction took Rock Against Racism’s message to the masses.”

Yance Ford, documentary competition president, said of Shah’s award-winning film: “In the spirit of the Grierson Award criteria, ‘White Riot’ is both a provocation and a tremendous opportunity.

“In this moment around the world the film implies that perhaps the lessons of the past were never learned.

“This rhetoric and politics of this moment in our history is familiar. And although language and symbols evolve, their meaning remains. Without nostalgia for 1979, the power of ‘White Riot’ is that it points directly at 2019.

“Rubika Shah has used the power of film to remind us of where we have been and asks how long it will take us to change course.”

Shah’s film is a fantastic exploration of how racism was defeated in the late 1970s as it grew among working-class communities – goaded by the usual suspects and some misguided pop stars. Shah did not do any interviews during LFF, but did appear on a panel with other documentary filmmakers also screening films at the festival.

She told journalists that she wanted as many people as possible to see the film and her work ends with words expressing the sentiment that the battle against hate and division is far from over.

The other winners are ‘Monos’ by Alejandro Landes – Best Film Award in the official competition.

And ‘Fault Line’ by Soheil Amirsharifi in the short film competition section.

Tricia Tuttle, director of the BFI London Film Festival, said: “Our awards highlight the most distinctive, urgent and accomplished filmmaking from around the globe and it has been an incredible festival – with audiences moved, provoked and dazzled by these films, many of which engage with pressing social and political themes in very inventive ways.

“We are hugely grateful to our juries for their time this week in picking the award winners. I know the quality of the nominated films made many of the decisions very difficult and the juries brought a tremendous amount of passion, integrity and expertise to the deliberations.”

In the main film competition, the jury also gave special commendations to ‘Honey Boy‘ by Alma Har’el and ‘Saint Maud’ by Rose Glass.

He also had warm words for ‘Honey Boy’: “Its blisteringly honest performances and clear-eyed, inspired direction make this brilliant film an unforgettable experience.”

Talking about ‘Saint Maud’, he added: “This dazzling directorial debut marks the emergence of a powerful new voice in British cinema.”

Hausner had this to say about the winning first feature film: “’Atlantics‘ is a film that intrigued us by its original and refreshing use of genre elements in a story that also has a strong political impact. Set in a country that is going through transition, this film dares to invent a poetic fable, mysterious and challenging.

“A crime scene that becomes a nightmarish tale, held together by a story of the endurance and persistence of young love.”

There was also a special commendation for ‘House of Hummingbird’ by Bora Kim, describing it as “a very profound insight on human existence”.

The BFI describes Amarsharifi’s film – “Nahal is an Iranian schoolgirl who must create a new version of the truth in a strict environment, despite there being unintended consequences to her self-preservation.”

Davies commented as president of the short film jury : “This is a film that provoked intense discussion as we continued to decode it long after watching; for its sophisticated layering of story, beautifully controlled performances and uncompromising and singular vision that provokes the audience to piece together the unseen events that motivate all of the characters’ actions.

“This subtle and unusual film manages to do something profoundly transgressive – formally and politically – whilst concealing the very things that make it so subversive. We all were desperate to watch this film again and again.”

The film ‘If you knew’ by Stroma Cairns was given a special commendation.

Each winner was presented with a 35mm commemorative print of their film by festival sponsor CPC London.