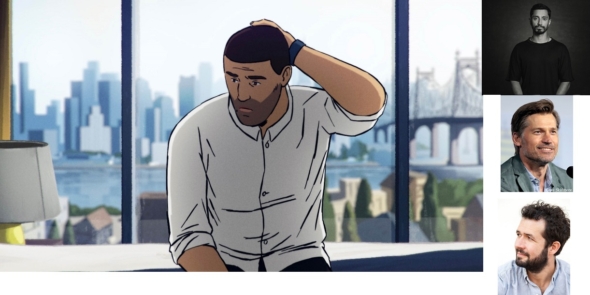 TO SAY ‘Flee’ – the animated feature film executively produced by British star Riz Ahmed – has made a splash following its world premiere at the US Sundance Film Festival on Friday (January 29) is something of an understatement.

The story is incredible and tells the tale of Amin Nawabi (a pseudonym) who flees from war-torn Afghanistan in the early 1980s as a child and has to cross several countries as a refugee and finally establishes himself as an academic in the US.

It is a very moving tale illustrating both the best and worst of humanity and is also about family and love, finding home and acceptance. (See our review here, for more about just the film which acv has seen as part of its Sundance coverage).

The film was originally selected for Cannes 2020 – which was cancelled last year.

‘Flee’ is made by Nordic award-winning director, Jonas Poher Rasmussen, who is Danish-French.

The film was widely reported in the trade press as the first sale of the festival and has been snapped by US powerhouse distributor Neon for a reported million dollars – covering rights for North America.

The US company sold Oscar winning Bong Joon Ho’s ‘Parasite’ and made more than $50m in sales domestically, the company stated. it has a number of titles on its forthcoming slate.

“In an overnight bidding war on the opening night of the Sundance Film Festival the film sold for an undisclosed seven-figure sum,” Neon disclosed in a press release not long after the film premiered digitally on Friday.

‘Flee’ is multi-lingual and its production involved companies in France, Denmark and Sweden, and has backing from US’ Vice Studios and Ahmed’s Left Handed Films, and also a distribution outfit that has worked with many Norwegian films.

Ahmed and fellow co-producer Nikolaj Coster-Waldau will assume the leading roles of ‘Amin’ and director Rasmussen in an English language version of ‘Flee’. The story unfolds as Rasmussen conducts an interview.

Ahmed said: “I was floored by the emotional impact of ‘Flee’. This is a unique project that pushes forward our ideas of what documentary, animation, and refugee-centred narratives can be. I’m proud to help bring this project to life for English speaking audiences.”

Coster-Waldau said: “When I watched ‘Flee’ I was blown away by the power of a story told in a simple way.

“‘Flee’ is a story of extreme perseverance and hope where all hope seems lost.

“By using animation director Jonas Poher Rasmussen captures the intensity of one refugee’s unbelievable journey from the streets of Kabul to the Danish suburbia.

“Because Amin is able to tell his story hidden behind his animated avatar it feels so much more revealing and honest than had it been a standard filmed interview.

“I am incredibly proud to be a part of ‘Flee’ and will encourage everyone to experience this gem of a film.”

Neon said it was excited to be working with director Rasmussen.

“Rasmussen weaves together a stunning tapestry of images in a triumph of storytelling and filmmaking ingenuity to tell a deeply affecting story of a man grappling with his traumatic past in order to find his true self and the real meaning of home,” it stated in its release.

Rasmussen and Amin Nawabi have both known each other since their schooldays. Rasmussen who has a background in radio documentary first thought of telling his friend’s story this way.

Rasmussen said: “Very excited to work with ground-breaking distributors Neon on getting ‘Flee’ out.

“Their roster of titles include a vast amount of my favourite films from the last couple of years and I’m extremely proud to now include my own work on that list.”

Monica Hellström & Signe Byrge Sørensen, for Final Cut for Real, the Danish company which primarily oversaw ‘Flee’, said: “So excited to partner up with Neon for the North America distribution, being such an innovative and bold company we feel they can secure a broad distribution across the US.”

Ahmed is working on ‘Englistan’ a TV series that has been commissioned by the BBC.

AMC is a large multi-national cable corporation based in the US.

Privacy & Cookies: This site uses cookies. By continuing to use this website, you agree to their use.
To find out more, including how to control cookies, see here: Cookie Policy
← London Film Festival 2020: ‘The Salt In Our Waters’ – a melancholic modern-day fable where moments of brilliance are abundant (Review)
Rekesh Chauhan produces Indian classical dance and music video on World Mental Health Day to raise awareness →