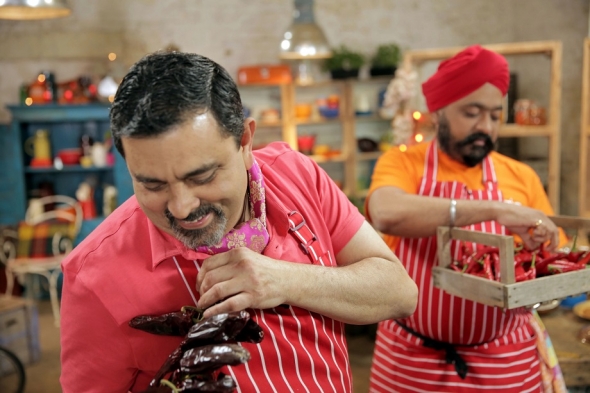 Indian cooking gets another twist…

WHY THIS programme, ‘The Incredible Spicemen, Todiwala and Singh’ began with a dreary scene inside a kitchen studio was perplexing, especially when they had decent outside footage of a visit to a Hastings fish and chip outlet?

Perhaps, they wanted to establish presenters Scottish restaurateur Tony Singh and sidekick (it looks that way), establishment Indian chef Cyrus Todiwala, who has cooked for The Queen, in the minds of the viewers.

It was not a good start and left us wondering how many had switched over at the thought of yet another programme about Indian cooking with a faint twist (they all have one).

It all seemed a bit too rough and ready – no lush Kerala backdrop for these Indian-origin boys, in contrast to Rick Stein, who had a kitchen almost set in the middle of a heavenly, tropical lagoon for his India series, broadcast earlier this year. Clearly our two Indian chefs were under heavier budget constraints.

When we got to Hastings, it improved, because it showed some folks actually trying the spicy concoctions Singh and Todiwala had manufactured using regulation cod or plaice. A bunch of bikers appeared, quite far from the hairy variety (as they love spice), and enjoyed the fare, even though they admitted to not being overly fond of chili (there are Brits out there like that…? Wow.)

The slow cooked pork was lovely to look at and probably to eat, but getting chefs to wax lyrical over their own produce…well, we can all do that…

Back to Hastings and adding spice to desserts – not quite as bizarre as it may sound at first. Singh pulled out a spice box from his pocket when he ordered an ice cream from a Mr Whipee type van. In the days when British/European food was as bland as meat and two veg or stodgy rice and boiled cauliflower, some folks carried precisely such a box of magic around them, so the food was palatable.

Todiwala played dumb as some Morris dancers did their business (in Hastings) and then handed over the aforesaid ice cream with one third chili and two thirds cinnamon – most liked it.

Concluding, the two prepared a dish of bread and butter pudding with cinnamon, cardamom and orange.

Todiwala is a versatile performer – his appearances on programmes such as ‘Saturday Kitchen’ are both informative and entertaining but in this two-hander, he seems cramped and plays the joker.

Singh, is a fourth-generation Scottish Sikh, and brings his deep knowledge of British cooking to the table, but somehow the kitchen scenes come across as slightly anaemic and lifeless.

Obviously travelling around (they did) and cooking in other people’s kitchens is more costly and needs more planning, but the best bits of this are when the two are out of the kitchen and engaging with others.

If they had some people to bounce off, especially as they prepare something, we’d learn and be entertained, rather than feel bored or hectored by the idea of using spice in more traditionally classic British Food.

It’s perhaps unfair to compare ‘Stein’s India’ to ‘The Incredible Spice Men’ and perhaps viewers have been very spoilt.

The idea behind the spicemen is a little flimsy in itself and needs more interaction and opposition, if it is going to make a decent impression on the sceptical and the converted.

There are four programmes left; let’s hope, the pace quickens, the soul is fired and there is passion and intensity, as you would get from using spices in your own cuisine.