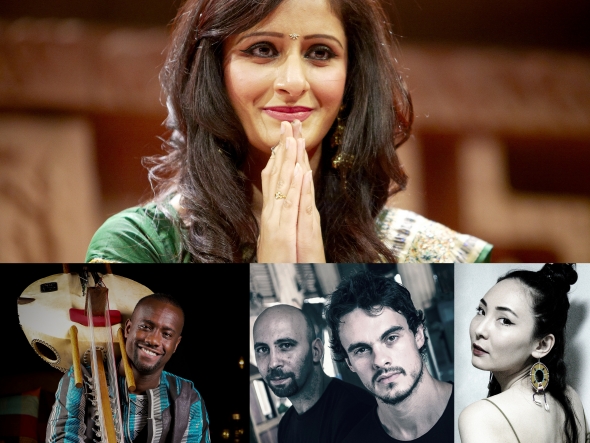 DARBAR is really mixing it up!

Quite literally the festival best known for its classical musical festival in London is heading to the East Midlands and adding a new set of musical genres to its classical core.

The three-day Darbar Fringe, which opens tomorrow (June 15) at New Art Exchange in Nottingham, will not only showcase Indian classical music but will see musicians from this tradition collaborate with urban and contemporary artists in a special concert, as well as give a platform to musicians exploring genres, style and identities.

There are also talks and food to give it that festival atmosphere and vibe.

It all starts musically with Kefaya – a band made up of different musical traditions and ethnicities who defy easy classification. They’ve toured India, Italy and the UK, among many places.

The first of three talks over the festival period begins at 2pm on the opening day – provocatively, its title is, Being Brown. Nihal (Arthanayake) Radio 5 Live broadcaster chairs the Saturday Big Picture discussion.

Sandeep Virdee, the artistic director of Darbar spoke to www.asianculturevulture.com about the reasons why Darbar has reached out to other musical traditions and how he wants to foster a wider debate about culture, creativity and the response of minority groups to the challenges of political developments, such as Brexit.

“We want to foster cultural connections, this is not just a South Asian festival, we want a more diverse feel and while it might be led by an organisation that is very into classical Indian music, it doesn’t mean that’s all we have to be about.”

In fact Darbar Fringe was inspired by a previous initiative that originated in the Indian classical musical festival and has now resulted in a special project and subsequent concert for Saturday evening (7.30pm).

Called Afterglow, Darbar Fringe brings four very different talents together for the one concert. The concert literally asks what does a flute player (Kristen Hammerseth),a sitarist (Jasdeep Degun), a beatboxer (Jason Singh) and a visual artist (Rehmat Rayatt) all have in common?

Find out at the concert…

No, seriously, the four have been specifically brought together by Darbar and asked to create something that will work as a concert. They have been working together for five days and the concert will be the culmination their musical and visual journey.

“They have been in a five-day residency as part of the festival,” explained Virdee. “And whatever they have produced will feature in the concert. It’s basically an incubation space and an opportunity for talented artists to explore different cultures, musical abilities and the creative process.”

He said in the past he has not been too thrilled by the ‘fusion’ concept of music and mixing different styles and traditions.

“Normally what fusion is, is putting two great masters on the stage and then whatever they produce is ‘fusion’. That might as well be a jam. I am not really impressed by that.”

In 2015, Darbar presented, Universal Notes, a concert that was the result of an active collaboration between musicians from the London Philharmonia Orchestra.

“I took the London Philharmonia musicians to India, both North and South India, and they met 12 great young masters of Indian classical music and did workshops with them – that fostered cross cultural understanding and an exchange of ideas.”

So Afterglow with its western classical, Indian classical and urban sound and visual effects will be in the same vein.

The festival also plans to attract people through food and free mini concerts with participating artists.

New Art Exchange is based in one of Nottingham’s inner city and diverse areas.

“The minute you mention Indian classical music, people want to run 100 metres away and this is in an area where people don’t access art at all, so how do you bring them in?

“One of the biggest things is food, we will be having brunch sessions on Saturday and Sunday and there will be flash pop up concerts. People who have never listened to Indian classical music will get a taste and the same with a beatboxer,” Virdee elaborated.

The opening talk – Being Brown is a free event and sees Skinder Hundal, the CEO of New Art Exchange, discuss the legacy of politician’s Enoch Powell’s infamous 1968 ‘rivers of blood speech’ in its 50th anniversary year. He will discuss the topic with successful musicians and cultural producers.

Nihal leads the Saturday debate on what Brexit could mean for minority groups. On Sunday Anila Dhami, broadcaster and journalist, moderates a talk entitled, Word Power, which looks at writing and cultural identity, among other literary concerns. Among the participants is Syima Aslam, the director of the hugely successful and influential Bradford Festival of Literature.

Virdee said it was important Darbar reached out and made connections across artistic disciplines.

“I feel cultural dialogue is important and that minorities are not good at lobbying in general. We don’t have a unified voice and that make us weak,” he believed.

On Sunday morning one of Britain’s best known home grown Indian classical musicians takes to the stage – Roopa Panesar plays sitar alongside Bhindarjit Neer on tabla. There’s a full range of food and pop up concerts to keep you entertained until the final concert of the festival.

Sura Susso plays the kora, a very ancient instrument that comes out of West Africa. Susso comes from a family with a deep tradition and connection to the instrument – which is not purely about playing but also spirituality. Susso brings his knowledge of western music into the mix to create a very unique sound.

Privacy & Cookies: This site uses cookies. By continuing to use this website, you agree to their use.
To find out more, including how to control cookies, see here: Cookie Policy
← ‘T for Taj Mahal’ – London Indian Film Festival (LIFF) central gala film has bittersweet story behind its making… (YT video interview)
London Indian Film Festival 2018 (LIFF) – Our picks…. and interview with Cary Rajinder Sawhney, LIFF director →