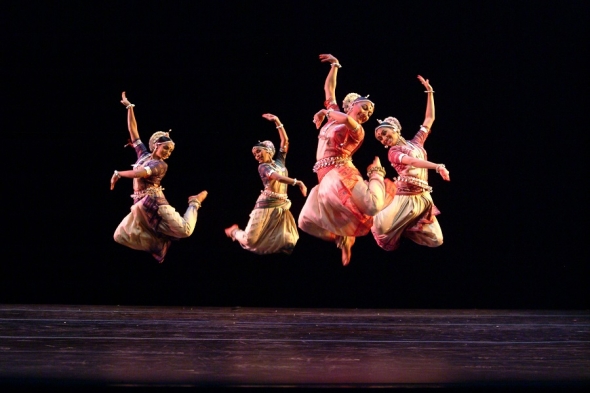 ONE OF INDIA’S foremost dance troupes, the Nrityagram Dance Ensemble is about to present a selection of its work, ‘Śriyah’ at the Science Museum this weekend (November 24-26) as part of a series of events set around the Illuminating India exhibitions.

The company will be performing a selection of dance pieces choreographed by the artistic director, Surupa Sen over the last decade that will showcase the best of Odissi dance to audiences in the UK.

The presentation is part of the India in UKIndia70 programme of events and audiences will be in for a treat, said Nelson Fernandez, UK Producer of initiative.

He has been watching work of the ensemble for last 15 years and said: “It’s a humbling experience to see something so rare with that level of accomplishment.”

The Nrityagram Dance Ensemble is a product of Nrityagram (literally ‘dance village’), which was the brainchild of the late, Protima Gauri Bedi (wife of actor, Kabir Bedi) who created the first free dance school in Bangalore (Bengaluru), Nrityagram at Hessaraghatta, 30km from Bangalore, and designed by architect Gerard D’ Cunha.

Protima Bedi came into prominence in India in 1974 when she streaked (naked) across Juhu Beach at the launch of Cineblitz magazine.

A year after this event, she went to see an Odissi dance recital and was so captivated by the form that she decided to devote her life to it and sought out as her teacher, the great dance guru Kelucharan Mohapatra.

Several years on she went on to establish Nrityagram, a free dance village near Bangalore in 1990 and the school was like a model village reviving the ‘guru/shishya parampara’ (teacher/student tradition) which today offers training in seven of the Indian classical dance forms (Kathak; Bharatanatyam; Odissi; Kuchipudi, Manipuri, Kathakali and Mohiniyatam).

Students come and stay for three to six years and they learn by practice, while the rest of the village grows its own fruit and vegetables for sustenance and they also study India literature, poetry, music and other art forms.

Protima Bedi who passed away in 1998 earned the sobriquet ‘Gauriamma’ and spoke of “building a community of dancers in a forsaken place amidst nature. A place where nothing exists, except dance. A place where dancers drop negative qualities such as jealousy, small-mindedness, greed and malice to embrace their colleagues as sisters and support each other in their journey towards becoming dancers of merit”.

One of her earliest students was Surupa Sen (now artistic director of Nrityagram and lead dancer) and she is one of the three dancers performing in London along with Bijayini Satpathy and Pavithra Reddy. (The dance ensemble grew out of the school’s evolution as a place of serious study).

Sen, an Odissi dance exponent who has choreographed the selection of work we will see at the Science Museum, said when she was speaking to filmmaker, Nan Melville in her documentary, ‘NRITYAGRAM: For the Love of Dance’.

“I think the only way to learn it (dance) is the way we do it – all day eight to twelve hours a day. I would not have been able to do it otherwise.”

Students come to Nrityagram and they don’t have to pay to study. The Gurus are employed by the school but the students learn to grow their own food, and about other aspects of Indian classical philosophy and culture.

Bijayini Satpathy, another senior dancer who joined Nrityagram in 1993 is the director of the Odissi gurukul (school), also explained to filmmaker Nan Melville.

“Odissi is not a (physical) movement, is a feeling, it is patterns that you create in space. It is the spirit that has to be there.”

The dance, she explains, comes from the temple dance tradition where it was a passionate and personal connection with the divine.

The third performer is Pavithra Reddy, a student of both Sen and Satpathy and first student to graduate from Nrityagram’s rural outreach programme.

Another follower of the company is the UK based Bharatanatyam dancer, Seeta Patel.

She told www.asianculturevulture.com : “I have watched a lot of their performances abroad in UK and New York.

“I’m a big fan, they are so expressive, detailed and technically advanced, and put in the hardwork to achieve the excellence they strive for.”

The ensemble will be performing to recorded music as the musician was not able to come over with the group.

The Iluminating India exhibition continues until Marcy 31 next year. At the centre are two major exhibitions, ‘5000 Years of Science and Innovation’ and ‘Photography 1857-2017’. Entries to both exibitions are FREE, as is general entry.