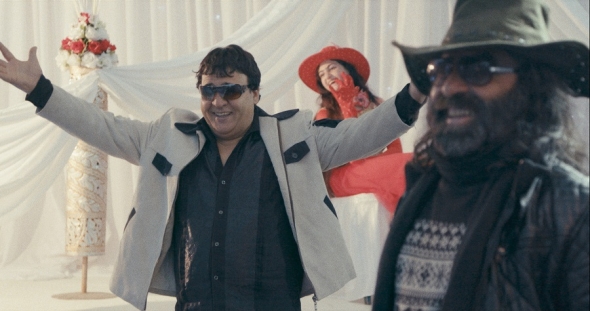 Afghanistan as you have never seen it before…thanks to a revealing and eye-opening documentary, as we talk to the woman filmmaker who made it…

THERE are not many film directors who cannot read or write – even less who have made more than 100 movies (111 to be precise) and are still going strong.

Meet Salim Shaheen, both the star and the subject of a documentary film, ‘The Prince of Nothingwood’ or ‘Nothingwood’, comes out tomorrow (December 15) in the UK. Shaheen is in London for a Q&A at the Picturehouse Central. See listings below.

The film first screened at Directors’ Fortnight in Cannes and premiered here at the London Film Festival and then a month later in October at the Mumbai Film Festival (Mami 2017) in India.

It was also where Shaheen was able to indulge his fascination and admiration for Bollywood and introduced himself to rapt audiences as the ‘Afghan Dharmendra’.

The real Dharmendra is an iconic figure and best known for his macho roles in Indian cinema – earning himself the moniker, ‘Action King’ or ‘He-man’. Dharmendra has been in Indian films for more than 50 years and is now an MP representing the ruling Bharatiya Janata Party (BJP).

The film, ‘Prince of Nothingwood’ is made by French radio journalist Sonia Kronlund.

From a French and Swedish background (hence her surname), she is based in Paris. She has covered stories about Afghanistan since 2000 and has been there routinely, and while she has made many radio documentaries, this is her first feature film. She began her career writing for Cahiers du Cinema, a famous film publication most often associated with the birth of French New Wave cinema and figures such as Jean-Luc Godard and Francois Truffaut.

“Salim is a larger than life character and I first went to meet him to write a story, I didn’t know too much about him,” explained Kronlund speaking to www.asianculturevulture.com from Paris.

“He is a big fan of Bollywood and describes himself as the Afghan Dharmendra.

“One of my ambitions in this film was to show how close Indian culture is to Afghanistan. The language is very close; they are obsessed with Bollywood films, it’s their life. They are listening to Indian music all day.

“I just thought he was a funny guy and then he told me about his fight to make movies, then I thought there could be a film,” Kronlund explained.

Shaheen works with a close-knit filmmaking community who have been with him for years and their stories are also chronicled.

“And then when I met Qurban Ali, I thought I really have to make a film. When I saw him shooting in the street and people were applauding this man dressed as a woman, it was really something.”

Kronlund said she was charmed by Shaheen’s life story – during the civil war that raged in Afghanistan between 1992-1996, he was a leader and defended his village from warring factions, but he continued to make films when he could.

In the ‘Prince of Nothingwood’ he describes how he and his filmmaking colleagues came under a bomb attack and how some survived, while other friends perished.

Shaheen’s story is absorbing in itself, but made all the more telling by the fact that outside Afghanistan, Shaheen is – or at least was – a nobody.

Kronlund added: “At first I had no idea how popular he was, it was only after travelling with him that I realised everybody knows him.

“Some people don’t like him, the more educated think he is just kitsch and a little bit of a buffoon, but he makes people laugh and he’s a popular character.”

Shaheen certainly has a certain star quality – in Mumbai he loved being the centre of attention and serenaded one post screening audience with some classic Bollywood tunes (see Twitter video below).

Kronlund’s film looks at a side of Afghanistan we rarely see in the mass media.

Salim Shaheen as a director

“I wouldn’t call it a mission, it was an idea and I didn’t want to do the same clichéd thing of being the macho journalist with the bullet proof jacket. They are very interesting characters and I was really touched by the idea that even though this doesn’t fit the criteria of great filmmaking, people like it.”

As a documentary broadcaster, she works a lot in the field of culture and the film sparked deeper ideas about cinema and what role it plays in society.

Though publicly, the Taliban continue to oppose any form of entertainment, many conscripts and softer supporters enjoy Shaheen’s work.

His films are never overtly political but often champion the poor, dispossessed, powerless and give a voice to men (there are very few women who work in Afghanistan film. His adult daughter does make an appearance in one) but his popularity and unerring passion for cinema travel well and what most captivated Kronlund.

“The film says something about what is unique (about cinema) and what are these images for and what is their purpose?” asked Kronlund rhetorically. “Shaheen’s films are about everyday storytelling and everyday people – peasants and farmers and there is always a bad guy. It’s their (Afghan people’s) stories and very popular for that reason. It’s not Bollywood and he isn’t Dharmendra but it’s local Bollywood.”

There is magic in Shaheen and his persona exude warmth, passion and ambition (having met him briefly in Mumbai) and you can see that in the films he make – despite their technical and financial limitations.

He does like to sing when given the opportunity…

As Kronlund suggested they may not be ‘great cinema’ as you or the West commonly understands it, but Shaheen’s commitment to storytelling and the dramatic arts in the widest sense is something worth cherishing and sharing – and Kronlund’s excellent film is itself a testament to the creative spirit, whatever the challenges.

The ‘Nothingwood’ in the title refers to refers to the fact there is not much of a filmmaking community in Afghanistan.

Shaheen doesn’t speak English but should have a translator on hand for the Q&A at its screening at Picturehouse Central tomorrow.