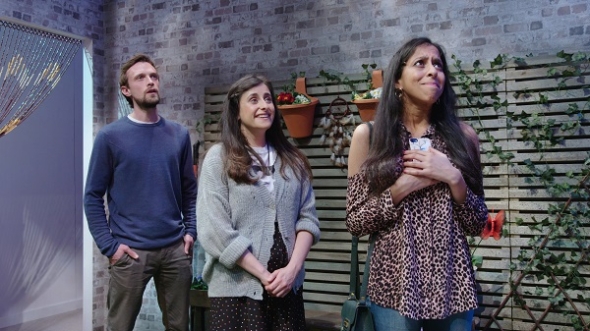 This new digital theatre production would have Wilde chuckling too…

CLEVERLY constructed, deftly played and laugh out aloud funny in a few places, Yasmeen Khan’s contemporary take on Oscar Wilde’s ‘The Importance of Being Earnest’ is a happy diversion in these difficult times.

Liberally spiced with a strong Northern flavour, Wilde’s wit is deliciously preserved, but given a very entertaining and relatable makeover by Khan.

There are cameos from comedian Sindhu Vee and actor Hugh Dennis (‘Outnumbered’) and ‘RuPaul Drag Race UK’ star, Divina de Campo – which give this production further jollity and edge – and the overall effect is fun, and funny.

None more so is this apparent than when acclaimed director ‘ Steve Merriman’ (Paul Chahidi) wants to hear lead character and debutant actor Jamil’s (Gurjeet Singh) generational pain in a prospective production called the ‘The Hills’.

There is possibly a whole play/film in a character like Merriman, whose own earnestness and sense of self is perfect for parody and satire. One of the other central characters makes the correct hand gesture to sum up Merriman’s pretentiousness.

Khan and Chahidi certainly have fun – and it is the standout of several two-hander’s across this breezy 70-minutes or so (watch to the end!).

Essentially, as is the original, this is a play built on mistaken identities and differing social status.

Khan’s approach is commendable in updating the central characters and giving the Asian ones a distinct quality that does them all justice.

Jamil (Singh) is young and uncertain – and not just at acting. He is also a bit down on his luck – his alter ego character, ‘Ernest’ is a flat-cap wearing Northerner with his own social media video channel. Basically, he pretends to be two different people – Jamil and Ernest.

The play starts with Ernest talking to his phone in one of his videos and being aided by cousin sister Safina (Zoe Iqbal), before rushing off to a mentoring session with actor of the moment and romcom star, ‘Algy Moncrief’ (Tom Dixon).

Algy is rather full of himself, conceited, vapid and manipulative – he takes a bit of a shine to one of Ernest’s 11 (yes, 11, not a typo) social media followers – Safina herself and seeks to ingratiate himself with Jamil/Ernest to engineer a romantic denouement. She, meanwhile, is besotted with him from afar.

Jamil too has romantic designs on ‘Gul’ (Nikki Patel) but has to cross her mother’s path to gain access – as is the (Asian) way… of course.

‘Mrs Begum’, played by Mina Anwar, who also directs this lively production, is the Lady Bracknell (from the original) of this piece and the quiz show scene where Jamil is put through his paces as a possible suitor to Gul’s fair hand is another one of the stand-out scenes – complete with game score numbers – which plummet when Mrs Begum learns that Jamil is an out of work actor who lives in a terraced house. Her look is enough to condemn him.

There is a neat sub-plot involving Mrs Begum and a long-lost friendMiss Prism (Melanie Marshall) and Khan manages to bring sisterly vibes to this and to a blossoming later friendship between Gul and Safina.

The tone is light, frothy and entertaining but has also intelligent and interesting observations to make on contemporary romance, social media, culture, faith and friendship.

Filmed on the Lawrence Batley Theatre stage in Huddersfield and the Dukes in Lancaster (both theatres co-produce), and broadcast digitally, this is a well-produced and very enjoyable way to spend time in the company of characters and a play that has arguably stood the test of time – but loses nothing in a little creative modernising.

Khan’s ear for comedy and juxtaposing that with a certain earnest northern sensibility lift this piece from just a simple modernising take on Wilde’s original 1895 hit. She has written for ‘Eastenders‘ and her wit is also evident in Rifco’s digital co-written comedy shots, ‘Leave The Plastic On‘ (see link below). She also has a career as a broadcaster and radio presenter.

All we can say, in conclusion, is more please – and perhaps let Khan go to town on something original of her own, but with the same delicious comedic approach super-charging the drama – perhaps this will come with news that she is co-writing a new play, ‘Going the distance‘ with Lawrence Batley Theatre artistic director and chief executive, Henry Filloux-Bennett. One to look out for on the basis of this!

Listing
‘The Importance of Being Earnest’ view online (extended) until Friday, May 14, further info/details – https://www.thelbt.org/shows/the-importance-of-being-earnest-2/

Yasmeen Khan and Pravesh Kumar writers Rifco – Leave the Plastic On (link to videos in News in Brief story)..
http://asianculturevulture.com/portfolios/bird-bites-theatre-shows-online-oscar-wilde-goes-asian-british-migrant-drama-leave-the-plastic-on-hit-writer-vinay-patel-bollywood-stage-hit-kali-appeal/