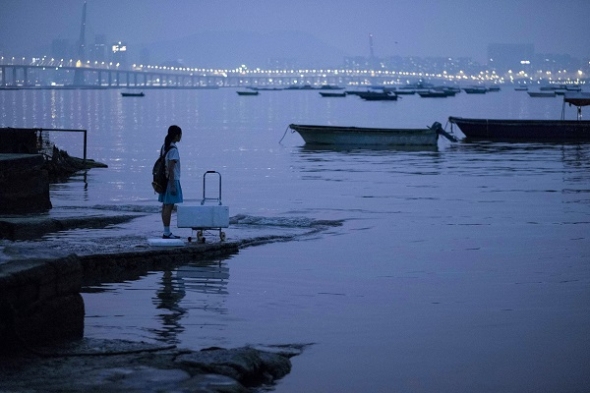 The story is deceptively simple, schoolgirl, Peipei (Huang Yao) who lives in Shenzhen crosses the ferry every day to go to school in Hong Kong, and the customs officials usually wave her through because of her school uniform and innocent face.

Together with her friend, Jo (Carmen Soup) they sell mobile phone covers to save money to go on a trip to Japan.

Her parents seem separated and she lives with her mother (Ni Hongjie) who spends her time playing mahjong, while her father (Liu Kai Chi) works and lives in the shipyard. The relationship between mother and daughter appears strained.

Peipei tries her hand at waitressing but it doesn’t work out and so she is introduced to the idea of smuggling i-phones into mainland China by Hao (Sunny Sun), boyfriend of Jo and meets sister, Hao (Elena Kong), and enjoys the attention, as she is sharp, and good at her job. You wonder how this will pan out for Peipei and the tension continues until the last scene…

There’s a lot to enjoy in this film, its focus on friendship, day to day life, teenagers, school and some wry comments on the non-resident Chinese community through Jo, who can go abroad if she doesn’t pass her exams.

She can live with her aunt who has made enough money to buy a posh house in Hong Kong merely by “frying chips” in Galway (Ireland)!

Some of the cuts from one scene to another are a bit jarring but the film captures the claustrophobia, high rise blocks and crowds of city life brilliantly. Huang Yao is absolutely charming as the lead, and this is a great insight into contemporary Chinese youth. Film is in Mandarin and Cantonese with English sub-titles.

*In December 2018, acv attended the International Film Festival Awards and Macao (IFFAM) at the invitation of Macao itself. It was a super eye-opener into Chinese cinema, of which there was a specific stand. That is hardly surprising being so close to Hong Kong and China and Macao itself was a Portuguese colony for many years. Several stars from China were prominent (among them Yao Chen) and none more so than chairman of the IFFAM jury, Chen Kaige, the director who made the epic ‘Farwell my Concubine’ (1993) and he remains the only Chinese recipient of the Palme d’Or, the highest prize at the Cannes Film Festival. Acv still has an interview with lead curator for the Chinese films at IFFAM, Giovanna Fulvi and we hope to run soon…