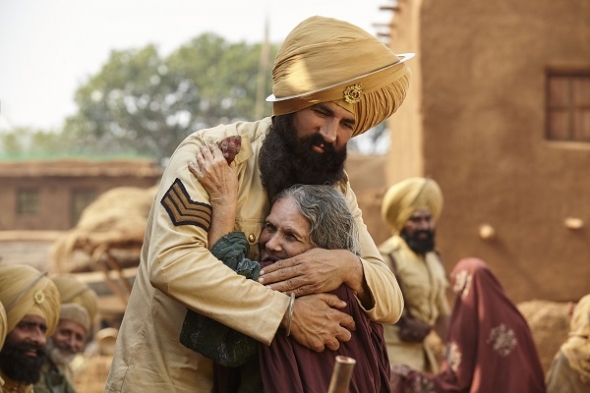 A cut above the usual war flick…?

FRANKLY-SPEAKING the trailer is a bit off-putting, but the new film starring Bollywood juggernaut Akshay Kumar, ‘Kesari’ is a decent watch.

It isn’t wholly the jingoistic slash em’ and burn em’ flick, it purports to be from the few scenes cut for the trailer.

No, it does have something to say and has more depth – the sweeping landscapes, the Akshay Kumar lead character and supporting cast are good and the story has resonance if you can appreciate the film in a wider (and not simply nationalistic) context.

Don’t dismiss ‘Kesari’ simply because it looks like a typical war film, or believe that it rides completely roughshod over religious sensibilities and it’s a simple equation (it never is, even though some prefer it to be). Historically speaking, this is when Afghan tribes were looking to push through that part of (undivided) India.

It is 1897 and Havildar Ishar Singh (Akshay Kumar) is a proud Sikh and lets valour get the better of him when a strange and beautiful woman is almost put to the sword by an angry cleric (sure, you get the idea).

Singh rescues her but incurs the wrath of his British officers who banish him to a fort far off and quiet, as punishment for starting a battle he shouldn’t have.

This, in the film, leads eventually to a very famous confrontation: the battle of Saragarhi, when 21 Sikh troops of the 36th Sikh regiment took on 10,000 opponents.

The first scene before the mystery woman being saved is very well done and tries to explain the political situation at the time.

The Brits are in control of northern India, which today would be pretty much Pakistan as it is constituted – the threat to the east comes from Afghan tribes (and constituent Pashtuns and other ethnic groups) in that part of the sub-continent.

The Russians continue to sniff around. British imperial designs were thwarted previously there and they have come to an accommodation with the rulers of the region – we will pay you to stay where you are and not attack. That is the explanation provided in the film.

However, the cleric now has the hump with the Sikhs and decides the time is right to launch an attack and enlists the support of other tribes from the region.

Before Singh’s arrival, the troops are a bit of a ramshackle bunch but under their new commander they find their cause and spirit.

Singh valiantly eschews narrow sectarian considerations and helps locals build a mosque – he also encourages the regiment’s cook – a Muslim – to help all during the coming fight by administering water to the injured – the enemies included.

Singh is depcited as a nationalist hero – he detests his status and bristles when he is reminded that he is a ‘slave’ of the British Empire and its representatives.

It is probably fair to say there is some creative licence here – those fiercely opposed to British rule didn’t join the Imperial British Army, but this was a different time and age and there was a growing sense of selfhood and spirit of independence building.

The music and the cinematography help immeasurably move the story along, and the characters are surprisingly well drawn and you care about all of them.

It may be a little crude in the depiction of ‘the enemy’ and a bit gory – but overall this is a well-crafted film and the battle of Saragarhi is a fitting subject for a film.

Indeed, in the closing credits, it says the soldiers were honoured by the British Crown and parliament for their bravery and all were awarded the Indian equivalent of the Victoria Cross, the highest military honour available. There are also two Gurdwaras dedicated to their memory and the battle is widely known and commemorated in India itself.

‘Kesari’ is out now worldwide…

Privacy & Cookies: This site uses cookies. By continuing to use this website, you agree to their use.
To find out more, including how to control cookies, see here: Cookie Policy
← Bird Eye Review Show Episode 10 – ‘ Bang Baang’, ‘Aapkey Kamrey Mein Koi Rehta Hai’, and ‘Pitta Kathalu’ (video)
The White Tiger film artwork – Inkquisitive (Amandeep Singh): ‘I have never painted on a car’ and going from being a ‘bedroom artist’ to a social media sensation… (video) →