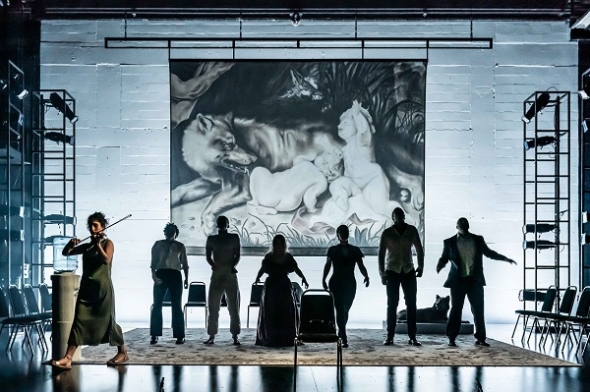 Ancient Rome and there is a power play for the Emperor’s throne – this play isn’t for the faint-hearted….

INTENSE and emotionally brutal – ‘Britannicus’ is a play that might well make you squirm in your seat.

It is best to turn up at The Lyric in Hammersmith, London with some idea of what will confront you.

Originally written in the 17th century by celebrated French writer, Jean Racine, this revisits a particularly fraught time in ancient Roman history and is essentially about power.

Topical you might think – and indeed it is – the stakes are very high and this is a fine production, mostly – with excellent acting and a certain level of necessary intensity throughout and it is what holds everything together in a reasonably tight 95 minutes.

The play revolves around Nero (William Robinson) not Britannicus (Nathanial Curtis). He is the son of Roman Emperor Claudius, and heir to the throne – but this is threatened by Nero (his half-brother) and his mother, Agrippina (Sirine Saba).

How much mother and son are responsible for egging each other on is one of the central questions.

The spectre of the powerful woman driving her son to dastardly deeds is too obvious a motif to ignore but as with all great drama much is ambiguous and complex.

The issue is not so much the production but the play itself – while the central narrative is about Nero usurping power – Racine also introduces a love rivalry into the equation.

Nero is enjoying the ride too much to stop and reflect – and that is not in his personality. Two powerful advisors are on hand to guide Nero in his quest – Narcissus
(Nigel Barrett) and Burrhus (Helena Lymbery). Both are excellent and just as menacing and dark as their master – if not more so…The point isn’t lost on us – are they simply reinforcing Nero’s wickedness or encouraging it?

Adapted by Timberlake Wertenbaker and directed by Atri Banerjee – this is a high energy production that sweeps you along.

It is a powerful and absorbing but it isn’t the easiest play to follow.

The modern setting doesn’t seem to add very much, if at all – the water dispenser is an interesting prop but doesn’t really assist in the narrative. The same could be said of the choreography of moving the chairs around – especially in the last quarter.

When the actors have their backs to us – it is a powerful scene. It simply emphasises that we are just spectators and have no say in proceedings but the body politic is massively disturbed.

This is a strong, confident production – and a play for those who like their theatre – bold and uncompromising. (Sailesh Ram)

Privacy & Cookies: This site uses cookies. By continuing to use this website, you agree to their use.
To find out more, including how to control cookies, see here: Cookie Policy
← Vasundhara Sellamuthu – Stellar International Rising Star 2022 talks about her work exploring Chennai as the Detroit of India, signage and multi-coloured homes …
JLF London 2022 – Crime and why we are drawn to it (as readers), celebrated authors discuss their work… →