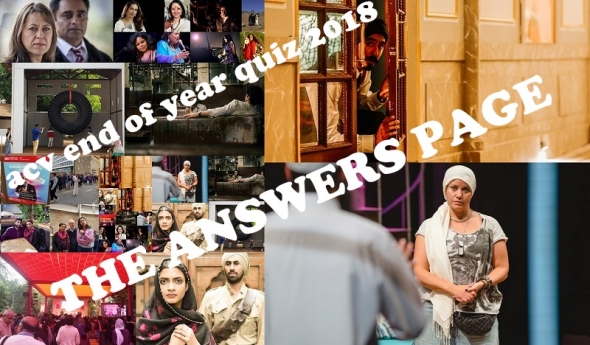 Are you the real deal or simply masquerading as one… test your knowledge of the Asian arts scene with our unique quiz…and see just how you fare… 😉 Now we all get to find out!

AS WE APPROACH the end of 2018 and turn down the lights on a turbulent and a year of change, acv is seeing whether you’ve kept up – most of the answers are in our stories on the site; there are some seasonal ones to get started, some are more general knowledge and there are a few trickier ones…

There are nine categories (you would not expect anything too easy from us, haha) and there are bonus points available – which can elevate you to a whole different level! (Bragging rights allowed!) – Good Luck!

The answers are in bold.

Q: Which actor/director premiered her biopic of the writer ‘Manto’ at the Cannes Film Festival this year?
A: Shabana Azmi
B: Nandita Das
C: Priyanka Chopra
D: Aparna Sen
E: Zoya Akhtar
For an extra point who played the lead in the film? Nawazuddin Siddiqui (pictured above)

Q: Vicky Kaushal is a rising star in Bollywood, which ONE of these two films released in the Autumn, did he appear in…
A: Daddy
B: Manmarziyaan
C: October
D: Andhadhun
E: Sanju

Q: Which film opened the International Film Festival of India (IFFI) this year in late November?
A: The Favourite
B: Roma
C: Robot 2.0
D: The Aspern Papers
E: Zero

Q: Who is the youngest female to have ever got press accreditation to the Cannes Film Festival and was part of the acv team in May this year?
A: Attika Choudhary
B: Suman Bhuchar
C: Shay Grewal
D: Momtaz Begum-Hossain
E: Tyra Grewal
An extra point if you can say just how old she was at the time. She was seven months old.

Q: Who plays the lead role of Tartuffe in the RSC production currently running at Stratford until February 2019?
A: Sacha Dhawan
B: Simon Nagra
C: Asif Khan  (picture from Tartuffe above)
D: Peter Singh
E: Shubam Saraf
For a bonus point name the director of this production – Iqbal Khan

Q: Which Bollywood extravaganza was performed at the Peacock Theatre, London this year?
A: White Teeth
B: Taj Express
C: Bollywood or Bust
D: Bring on the Bollywood
E: Dishoom

Q: Which play dealt with the fake Islamist plot to take over Birmingham schools?
A: Sundowning
B: Sweat
C: Trojan Horse
D: Cry God for Harry, England and Saint George
E: Voices in the Dark

Q: Which dance theatre show contained both a romance and a tragedy about the First World War and is inspired by a famous Indian short story?
A: The Troth by Akademi (pictured above)
B: Young Men by Ballet Boyz
C: Xenos by Akram Khan Company
D: Remember: 1914-1918 by Candoco Dance Company
E: Contagion by Shobana Jeyasingh Dance Company

Q: Which rapper and recording artist was the subject of a candid documentary that hit the big screen this year?
A: Mathangi Arulpragasam
B: Riz MC
C: Hard Kaur
D: Jay Sean
E: Raja Kumari

Q: Which Asian pop singer who took part in the Women in the Arts conference by Sama arts, was ‘ever so lonely’?
A: Najma Akhtar
B: Sheila Chandra  (collage picture of performers above)
C: Abi Sampa
D: Alka Yagnik
E: Shreya Ghosal

Q: What genre of music was celebrated at this year’s Zee London Mela?
A: Jazz
B: Rap
C: Khayal
D: Bhangra
E: Fado

Q: Which sarod artist collaborated with a Carnatic violinist for an event which was specially commissioned by the Bagri Foundation?
A: Amjad Ali Khan
B: Arnab Chakraborty
C: Wajahat Khan
D: Debasmita Bhattacharya
E: Soumik Datta

Q: Who wrote a novel about a Gujarati family from Kenya settling down in Bradford?
A: Nikesh Shukla
B: Salman Rushdie
C: Vinay Patel
D: Nadeem Aslam
E: Vaseem Khan
For an extra point name the title of the novel – The Man Who Wrote Destiny

Q: Libraries and graveyards were the subject of two photo exhibitions by artists who are part of the #NewNorthSouth initiative. Where did the exhibition take place?
A: Whitworth Art Gallery, Manchester
B: Ikon Gallery, Birmingham
C: The Tetley, Leeds
D: The Hepworth, Wakefield
E: Tate Modern, London

Q: Which comedian was nominated for the ‘Best Newcomer’ award at the 38th Edinburgh comedy awards 2018?
A: Shazia Mirza
B: Ayesha Hazarika
C: Sindhu Vee (see picture collage above of acv Edfringe 2018)
D: Sajeela Kershi
E: Shappi Khorsandi
For an extra point give us the title of her show – Sandhog

Q: Which BBC series features the travails of a radio station and is set in Brentford, West London?
A: Still Open All Hours
B: The League of Gentlemen
C: Citizen Khan
D: People Just do Nothing
E: Only Fools and Horses

Q: In which Television series, did the phrase ‘Kiss my Chuddies’ originate?
A: The Real McCoy
B: Goodness Gracious Me
C: The Comic Strip Presents
D: The Lenny Henry Show
E: Are You Being Served?

Q: In the Season 11 of the ‘Doctor Who’ series, what is the name of the doctor’s travelling companion played by Mandip Gill?
A: Yasmin Khan
B: Ayla Nazir
C: Afia Masood
D: Priya Kotecha
E: Alia Khan

Q: What role does actor, Anupam Kher play in the BBC drama, ‘Mrs. Wilson’?
A: A former husband
B: A spy handler
C: A footman
D: A doctor
E: A civil servant

THE END OF THE ASIAN CULTURE VULTURE QUIZ 2018

Scores:
0-15 Really!
Subscribe to the ACV newsletter to brush up on your arts education and never be left out of the water cooler conversations
16 – 30 oh, no…!
You must hone up on your artistic credentials a bit more – make that a 2019 resolution!
31– 40 Not bad
You can definitely go around and pretend to be a culture vulture…
41 – 45 Well done!
Make this a specialist subject for 2019 and get on Mastermind!
46+ Congratulations!
You know your culture from your vulture and can hold your own in any artistic soirees. Do subscribe (if you haven’t already) and make sure you are on the invitation list for any of our events in 2019… Keep flying high with the bird!

A HUGE AND VERY WARM THANKS FOR ALL YOUR SUPPORT AND INTEREST! WISHING YOU A MOST SPLENDID 2019 FILLED WITH MUCH WONDER, GROWTH AND SHEER EXHILARATION! FROM ALL AT www.asianculturevulture.com

To follow us, click on any of the tabs in the top right on the home page of the site! Thank you!  🙏🏾

Privacy & Cookies: This site uses cookies. By continuing to use this website, you agree to their use.
To find out more, including how to control cookies, see here: Cookie Policy
← ‘The True Cost’ – killing for fast fashion? UK Asian Film Festival (Tongues on Fire) and The Circle host powerful screening….
‘Eastern Star’ – Myanmar and the reporter and the whistleblower – who really wins? (review) →