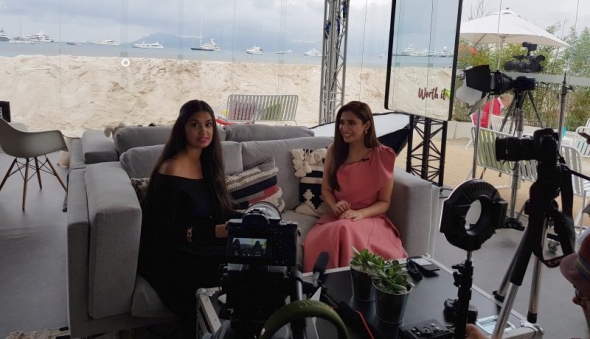 IT’S BEEN another very busy day here at the Cannes Film Festival and one of our big set piece interviews took place earlier today.

We were at the L’Oreal Paris beach studio facility opposite The Martinez Hotel to interview Mahira Khan.

Khan, from Pakistan, is making her L’Oreal Paris debut this year.

She was very friendly and her undoubted charm bowled everyone over – and she, well, very much looked the part.

ACV special presenter Shay Grewal was also hugely impressed in what was her first chat with the Pakistani star who rocketed to fame around the world when she appeared in the Bollywood film, ‘Raaes’ in early 2016, alongside the Badshah of Bollywood himself, Shah Rukh Khan.

Deteriorating diplomatic relations between India and Pakistan throughout 2016 led to a near total ban on Indian and Pakistani talent working together on films.

She addresses this subject head on, and clearly has a huge amount of affection and respect for her fans everywhere, India included, she revealed.

In the interview she also talked to Shay about life as a working mum (she has a seven-year-old son and is divorced), her decision to star in ‘Verna’, despite its extremely sensitive subject – a rape which turns into a full scale examination of Pakistani society and its mores towards women who do not follow traditional paths.

She is undoubtedly a trailblazer and someone who appears to have a very bright future ahead of her.

If she plays her cards right at the best of times, she can bypass Bollywood altogether and head straight for Tinseltown.

More exposure in the West and a showcase like Cannes can only help her cause in that direction.

Watch this space – as they say and do watch and comment on the interview when it comes out on our Youtube Channel shortly. Subscribe and don’t miss it!

Have you seen our Huma Qureshi interview? Shay talks to the Bollywood star about her career and how it all began in Cannes with her first film, ‘Gangs of Wasseypur’.

Privacy & Cookies: This site uses cookies. By continuing to use this website, you agree to their use.
To find out more, including how to control cookies, see here: Cookie Policy
← Cannes Film Festival 2018 (today): Nadine Labaki – scaling the Cannes ladder, how to do it as a young filmmaker from a non-traditional background…
Cannes Film Festival 2018: ‘BlacKkKlansman’ – both Sonam Kapoor-Ahuja and Mahira Khan walk Red Carpet world premiere for new Spike Lee film →