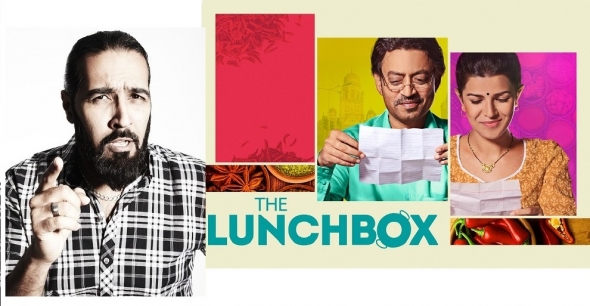 Sunny Grewal (pictured left above), one half of the radio partnership that is Sunny and Shay (his wife) – and with her, they both host the Sunny and Shay show on BBC London 94.9FM, every Sunday between 6pm and 8pm.
Sunny, a massive film buff and nascent actor-director, will be giving www.asianculturevulture.com his thoughts on the films he has seen every month and the ones he’s most looking forward to seeing…

HI, we’re going to do things a bit differently this month…we’re going to start with the films I am going to see and then come back to the movies I talked about in my March column and which I have now seen…

First up then, these are the movie trailers I have seen on line and this is what is getting me to take my ten pounds out of my pocket…

“The Amazing Spider-Man 2” (2014), don’t want to get confused with the “Spider-Man 2” (2002) – if you remember from the column I did with Superwoman (here), when I explained to her that ‘Spider-Man’ has died. The comic books this month are going to be bringing back ‘The Amazing Spider-Man’ issue no1, and in the cinema you will be able to catch “The Amazing Spider-Man no2”, it’s the same strand in the comic books, so it’s a good time to actually start buying them and then watch the first Spider-Man.
It’s got Brit Andrew Garfield, Emma Stone and Jamie Foxx in this one, and I’m really excited about the movie. In the trailer we get to see that Spider-Man is up against three villains – Electro (Foxx), Green Goblin (Dane DeHaan), The Rhino (Paul Giamatti).
These are the three villains Spider-Man is taking on by himself in Times Square. From the trailer, you can see it’s got a great budget, a lot of humour and it’s going to be available in 3D. I don’t think it’s that important to see it in 3D, because for me the technology is not up there, but if you get to go to see it at a cinema like the IMAX definitely go for 3D – but at your local it’s not necessary, it’s really your preference.
Out: April 16.

Our next film is “Locke”. This stars Tom Hardy, Ruth Wilson, and Tom Holland. A British film – this is all based on the trailer and rumours I have heard on the grapevine. The film is about a construction manager whose life drastically changes when he receives a series of phone calls while he is driving.
Don’t forget this is Tom Hardy who is used to doing big Hollywood movies, but when it’s a good script he comes down to it, so when he’s in a film – and it’s a low budget one – we need to sit up and pay attention.
It looks like a bit like a TV movie but then straight away you get involved by his performance and you are already captured. Definitely one to watch.
Out: April 18

“The Raid 2” – this film literally picks up from the other film (Part I) ending. It’s almost like the other one ends and this starts, almost like a soap opera. It’s like a continuation; what’s happening in the film I don’t know…it is so fast paced and energised, that I am just excited.
I don’t know what the story is about or what’s going on but there is a lot of violence, a lot of fast movements. I’ve seen “The Raid” – it was an amazing concept – there’s the guy who walks into a building and just fights his way up to get to the boss – it’s like a video game to me – a bit like Brue Lee’s “Game of Death” , it’s similar. If you’re not excited, this is not the film for you.
It’s not an English film so be ready to read (subtitles) but there’s going to be so much action I don’t think you’ll be able to read them anyway – you’ll have to watch it twice.
ACV adds: It’s directed by Brit Gareth Evans who made The Raid and is now based in Jakarta. The film is set there and features Evan’s own discovery, Iko Uwais, who is a star of Indonesian martial art, pencak silat. Evans first made a documentary about the martial art and made his first feature with Uwais to great acclaim. Watch out, Uwais could be the next big film export from S-E Asia.
Out: April 11

“The Lunchbox” won quite a few awards on the film festival circuit and Irrfan Khan is in this – who, is as far as I am concerned, one of India’s best actors and another up and coming actor I really enjoy watching is Nawazuddin Siddiqui and starring alongside them as Khan’s love interest is Nimrat Kaur.
It’s based around the dabbawallahs – a whole infrastructure of men on bicycles who deliver lunchboxes to office workers in central Mumbai.
The wrong tiffin box is delivered to the wrong man and he eats it and sends a letter back. You can see the love triangle forming – I would watch it, just because Khan and Siddiqui are in it, but the amount of awards this film’s won just gives me more confidence to spend my money at the box office. It’s the first Indian (Hindi) film in a long while to get this kind of release (far more than just the usual cinemas showing Bollywood films).
ACV review: ‘The Lunchbox serves up sweet treat‘
‘Nimrat Kaur in TRS spice drama‘
Out: April 11
WIN TWO FREE TICKETS TO SEE FILM AND GET DISCOUNT ON MEAL AT WATERMANS, BRENTFORD, LONDON (CLICK HERE)

This is a small film. It’s funny I am picking small films this month because the big blockbuster is Spider-Man 2 – and this kicks off the summer season, so every month we are going to have a big film now.
This film is “The Double“…it stars Jesse Eisenberg, Mia Wasikowska and Chris O’Dowd.
It looks like the Eisenberg character is leading a double life and when I saw the trailer, I was getting more and more confused and I like a film that confuses me.
If I can’t follow all the information in a trailer, then I need to watch the film to see what the hell is going on. It reminds me of “Momentum”, and I think this is in the same vein, don’t go there, thinking you can switch your brain off – I think you need to switch it on.
Hope it lives up to the expectation created by the trailer. It’s a comedy and has everything that I like in a quirky film.
Out: Now (April 4)

I’ll be rating all these films in next month’s column, look out for that! Now to what I have seen over March and their Sunny ratings  or not…

“300 – Rise of An Empire” I watched it in 3D and totally enjoyed the visuals. If you liked 300, you will like this film. It isn’t a sequel but a parallel story. Visually, it was brilliant. The characters and the acting were secondary to the special effects, but that is what you expect. It didn’t disappoint me for what it advertised. The visuals were not anything original or new, but in my opinion they didn’t need to be. It complimented 300 and if you haven’t seen it, you can see how these films actually work together in sequence.
Hollywood popcorn: 4/5

“Muppets Most Wanted” – not as strong as last year’s movie. Go watch it – the trailer gives away quite a lot and it’s all about mistaken identity about Kermit and he’s a villain all of a sudden.
Children’s smiles: 3/5

“Captain America Winter Soldier” – if you are friend of Marvel Comics in their second phase, this is a must watch, there’s a massive give away at the end. It’s what you would expect of a Marvel movie – big action. He is set up in his own universe – it’s just like Spider-Man, you don’t have to be a fan of comic books to understand – the first film has given you all the information, but if you are a comic book fan you’ll get those little insights the filmmakers give a nod to…
Soldiers’ shields 3/5

“The Grand Budapest Hotel” – it was the best film that came out last month and it is my favourite out of all of them because I like little quirky films and Wes Anderson, the director, does it by the truckload. This film is pompous, snobby, cute, funny and unapologetic.
It’s almost like having a cake with too much icing on it – and yet you like that icing, that whole presentation of it, you know it is sickly but you just love it for some reason, it’s just brilliant.
I can’t say anything bad about this film, whatsoever. It’s good to see a non-white character at the centre of it and I love that his name is Zero. It’s got Ralph Fiennes in it – any movie he is in, you should watch. Remember he’s the new M in James Bond films.
If you want to get into Wes Anderson this is a good film to do that. If you don’t like the film, you won’t like any of the others he has made. ACV adds: Zero, the aspiring lobby boy in training, is played by Tony Revolori, who is American Guatemalan.
Sunny Stars! 5/5 First time!

“Gulaab Gang” is a brilliant film for Bollywood. It’s not to be taken too seriously, you have to watch this as a Bollywood film and it did its job. Not enough people talked about it – it deserved to get more attention. For me, it was a missed opportunity, if you didn’t get to see it at the cinema, do please see when it comes out on DVD.
If you like women kicking a** then you are going to love it. Madhuri Dixit and Juhi Chawla are for the first time on the big screen together – it was good, they complimented each other’s roles and they still look as stunning as ever.
Saris 4/5

“Queen” – I didn’t really enjoy it that much. The same joke was repeated again and again and I just lost interest in the film while I was watching it. It wasn’t the typical Bollywood film, but it was the same joke again and again. This is been done before and better.
Drag Queen 1/5

You can listen to Sunny & Shay on BBC London 94.9FM here www.bbc.co.uk/sunnyandshay

Sunny and Shay from the Bafta nominated Channel 4′s “The Family” delighted us as members of the Grewals whose antics were followed daily on the Channel 4 series – their Punjabi wedding became a major part of the series and gave its non Asian viewers an insight into the build up to a British Asian wedding! Since the success of the show Sunny and Shay now present their own Sunday evening show for BBC London 94.9FM at 6pm.