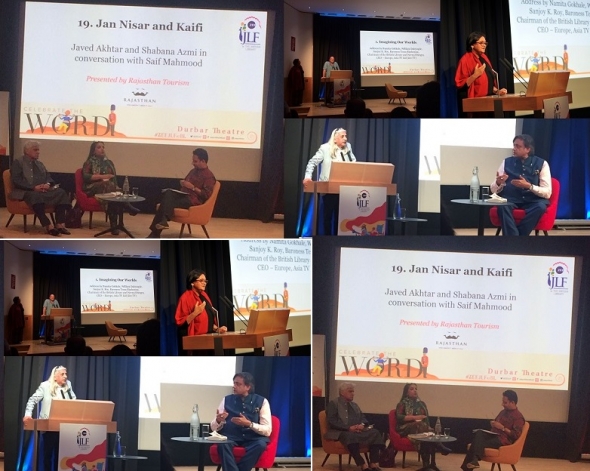 ‘ISLAM and modernity’, women’s rights, and identity were just three of the explosive topics that electrified this year’s Zee Jaipur Literature Festival at the British Library.

The London edition of the now 11-year-old Jaipur Literature Festival did not disappoint.

Over a100 speakers from across the globe, from a range of disciplines, were brought together over three days (June 8-10) to discuss a range of literary topics, aiming to showcase South Asia’s rich intellectual and literary heritage.

In ‘Islam and Modernity’ – the panellists* themselves threw out the title. Both audience and speakers unanimously agreed to rename the session as ‘Religion and Modernity’, with Javed Akhtar passionately exclaiming, that a modern world will be one without religion. Much to the exclaims of his fellow speakers, his disdain for religion and claims to be an atheist, could not have been clearer.

A session on 100 Years of the Suffragette also proved to be a highlight of the festival from author and broadcaster Anita Anand discussing the life of Indian suffragette (Princess) Sophia Duleep Singh to speaker Baroness Helena Kennedy explaining the importance of the #MeToo campaign.

Notions of race, identity and publishing in Britain were explored by poet Kayo Chingonyi, novelist and editor Nikesh Shukla, and moderator and author himself, Prajwal Parajuly. On his decision not to italicise the Gujarati or Swahili words in his latest novel, ‘The One Who Wrote Destiny’, Shukla explained: “I treat these words as normal as they are in my head.”

Drawing in the largest crowds were sessions featuring actress and activist, Shabana Azmi who shared the stage with her husband and lyricist, Javed Akhtar in a rare discussion on their poetic heritage. People were also treated to a series of poetry readings by Javed Akhtar (With English translations by Shabana Azmi), including his latest poem, ‘Saazish’.

Another session with Shabana Azmi on her journey from actress from activist also proved to be popular as she explained how her acting roles influenced her passion for fighting for justice. “I couldn’t play these characters and then go back to my air-conditioned house and forget about it.”

Other highlights included a session with Katherine Boo on her highly acclaimed book on the people who in a Mumbai slum but dream in ‘Behind The Beautiful Forevers’ and a jovial, light hearted conversation on cricket and nationalism, featuring former diplomat, writer and now Indian MP Shashi Tharoor and former Ashes-winning England cricket captain, Mike Brearley, now a writer and psychoanalyst.

The festival began with co-directors William Dalrymple and Namita Gokhale offering a very warm welcome and there was also an introduction from producer of the festival, Sanjoy K. Roy.

What followed was an insightful discussion between Gokhale and Tharoor on his perceptions of Hinduism and his personal relationship with the religion, and reading from his latest book, ‘Why I Am A Hindu’.

Now its fifth year in London, visitors were spoilt for choice with a carefully curated programme consisting of a wide variety of topics – sport, history, nationalism, politics, religion, human rights, gender equality and many more.

As with the festival in Jaipur, both days began with musical renditions from Deepa Nair Rasiya, Azeem Ahmed Alvi and Amrit Kaur Lohia in a session on Songs of The Sufi.

It was a weekend of informed talks, inspiring speakers and brought together the best of both crowds and writers, all eagerly looking forward to Jaipur Literature Festival next year!

Perhaps, Tharoor summed it all up and spoke for both speakers and audiences…