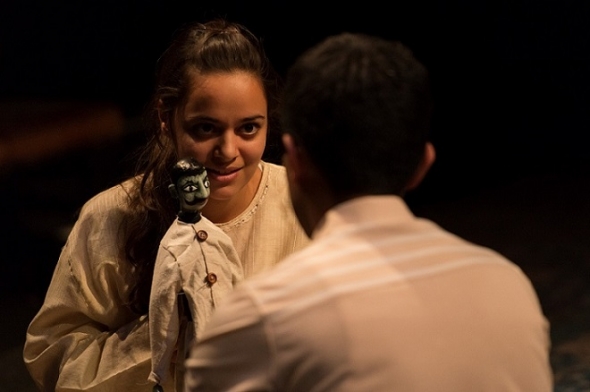 WRITER Abhishek Majumdar’s play, ‘The Djinns of Eidgah’ had a rehearsed reading at the Royal Court in November 2012, as part of a showcase season, New Plays from India, in collaboration with Rage Productions, Mumbai.

Twelve writers from all over India were selected to write a play about their changing country, which were developed over 18 months and performed as part of the Writers Bloc Festival at the Prithvi Theatre, Mumbai, in January 2012.

Five of these plays then had rehearsed readings at the Royal Court Theatre – and only one, ‘Djinns’ now returns for a brief run at the venue as a completed product, directed by Richard Twyman.

The play uses a mixture of naturalism, testimony and myth to tell the human story of the impact of the Kashmir insurgency which is seldom in the news.

A father tells his two children a bed time story but they are soon orphaned. The siblings, fourteen-year old Ashrafi (Aysha Kala pictured above) and her 18 year old brother, Bilal (Danny Ashok) live in Srinagar, keep their lives going by recalling a story about djinns who fight a war that never ends (presumably a metaphor for what’s happening in the region).

We learn that father was killed when he was travelling with his daughter on a bus which was bombed and she is left cradling his dead body in her lap. As a result “Shefu”  suffers from mental distress and has retreated to her world of djinns and ‘dastans’ (stories) while her older brother, Bilal takes care of her and dreams of playing football for the region. Meanwhile, his peers chant slogans for an independent Kashmir, and he finds himself being taunted to take sides in an uprising he wishes to leave behind.

The story unfolds over two days before Eid, as another set of peace talks are due whilst at the same time there is curfew and protests. Dr Baig (a fine, Vincent Ebrahim),is a rationalist, treating people suffering from mental illness but is plagued by the djinn of his son who joined the jihadis (Aspects of Baig’s character is drawn from the work of Dr. Mushtaq Margoob, who runs a mental health clinic in a government hospital in J&K where patients now number 100,000).

Majumdar, has spent a lot of time doing researching – from living with soldiers from the Central Reserve Police Force, India as well as “freedom fighters” — clearly evidenced in the nuanced way by the characters and arguments constructed. The two Indian soldiers who are sent to guard the eidgah against insurgents, played by Jaz Deol and Paul Bazely, are really excellent in these scenes.

The beautifully versatile set by Tom Scutt – featuring a long carpet running the length of the stage – which is built in the middle with the audience sitting on either side of the auditorium – extends into a loom which goes around the stage bordered by gauze along with an excellent lighting design (Natasha Chivers) works very well to create a hypnotic and eerie effect, especially with the night scenes where you sense that the soldiers are keeping a look out at the eidgah, which here serves as an open air mosque and graveyard.

The plays moves between reality and supernatural constantly, and the writer, is not interested in exploring the different positions of this conflict. Everyone is suffering and he is unflinching in describing the horror of war and its effects on ordinary people.

‘Djinns’ is second in a trilogy of plays that Majumdar is involved in on the subject of war and Kashmir: the first one ‘Rizwan’, was inspired by the poems of the late Aga Shahid Ali; and the last, ‘Gasha’ ,is a play in Hindi (written by Irawati Karnik and directed by Majumdar) that revolves around a friendship between two boys, a Kashmiri Hindu and a Kashmiri Muslim, spanning twenty years. It will be good to be able to see this entire trilogy in the UK sometime.