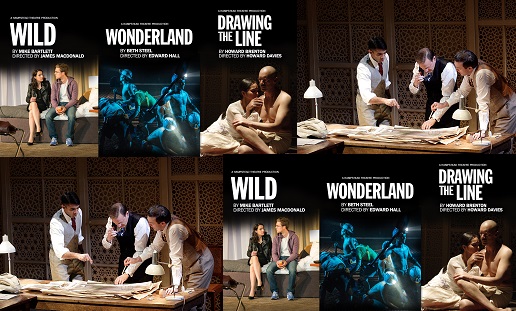 THERE’S a chance to see an original play that attempts to get behind the politics and the personalities behind Partition.

It’s a fascinating – and at times controversial and sparky – drama which shows that politics and principles could well have played second fiddle to more personal passions and ambitions in the fate of a few hundred million people.

Howard Brenton’s ‘Drawing the line’ (2013) takes us back to the time just before Partition as the British government decides it must depart the subcontinent after 200 years or so and manage competing demands.

‘Drawing the line’ is the final play of a trilogy of productions being screened free online for a week.

Originally produced by Hampstead Theatre and recorded live for streaming on a Guardian UK newspaper platform, three separate plays are being made available for 7 days each.

‘Drawing the Line’ will be available from 10am Monday, April 13 through to 10pm, Sunday April 20. The production features Nikesh Patel, Tom Beard and Brendan Patricks and was directed by the late Howard Davies.

See our review and the report of the Q&A Brenton had with journalists following a show at Hampstead Theatre in December 2013.

Here’s how the theatre describes ‘Drawing the Line’…

London, 1947. Summoned by the Prime Minister from the Court where he is presiding judge, Cyril Radcliffe is given an unlikely mission. He is to travel to India, a country he has never visited, and, with limited survey information, no expert support and no knowledge of cartography, he is to draw the border which will divide the Indian sub-continent into two new Sovereign Dominions. To make matters even more challenging, he has only six weeks to complete the task.
Wholly unsuited to his role, Radcliffe is unprepared for the dangerous whirlpool of political intrigue and passion into which he is plunged – untold consequences may even result from the illicit liaison between the Leader of the Congress Party and the Viceroy’s wife… As he begins to break under the pressure he comes to realise that he holds in his hands the fate of millions of people.

Already screening and completing its mini-run this Sunday (Apil 5) is Mike Bartlett’s ‘Wild’ by James Macdonald. Inspired by the 2013 American spy whistleblower Edward Snowden, it’s both a comic and personal exploration of a life in the midst of profound change.

Next week you can see Beth Steel’s ‘Wonderland’ (2014) – a drama centred around the Miners’ Strike between 1984-5 and the difficult questions it raised. All viewings for each play close on Sundays at 10pm.

Roxana Silbert, artistic director of Hampstead Theatre, said: “I am delighted and grateful to be in a position to offer this new #HampsteadTheatreAtHome series from Hampstead’s digital archive.

“I hope these productions offer audiences entertainment, connection and nourishment in a time of uncertainty and isolation. These three plays all shine a light on turbulent points in our international history which, along with acknowledging the worst of human behaviour, celebrates the ingenuity, humour, compassion and resilience of the best.”

She also praised all the artists involved and The Guardian for making it all possible.

In the original initiative the plays were also available on demand for 72 hours following the live streaming.

Hampstead Theatre closed on Monday, March 16 in line with Government advice. Its first foray into the digital Corona environment began with a screening on ‘I and you’ by Lauren Gunderson and was shown on Instagram’s TV service, IGTV for six days, ending on March 29. It too enjoyed a previous week-long available broadcast on Instagram.

Privacy & Cookies: This site uses cookies. By continuing to use this website, you agree to their use.
To find out more, including how to control cookies, see here: Cookie Policy
← ‘Next of Kin’ – Terror plot prime-time drama careful to avoid stereotypes and has relatable British family (played by top notch cast) at the core, say creators
The ACV editor 5 highlights of 2017…. (books, dance, art, theatre and TV) →