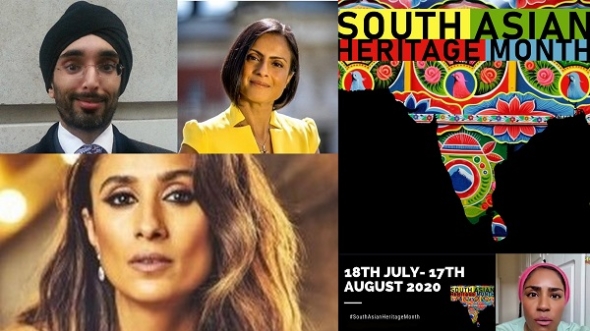 She is the founding patron of SAHM and the actual month of activities, celebrating many and different aspects of South Asian culture will start officially tomorrow (July 18) and run through till August 17.

Jasvir Singh OBE, one of the co-founders SAHM, alongside Dr Binita Kane, got the campaign going today when he presented the influential Thought for the Day segment on BBC Radio 4’s ‘Today’ programme.

There will be a range of celebrities helping to promote the initiative and get people talking and discussing history and heritage – Nadiya Hussain dropped a video earlier today… (on mobiles, click to see in full).

You can follow in real time on any of the SAHM social media channels – here is Twitter.

Look out for other well-known personalities also expressing their support – Dr Ranj Singh, TV medic and NHS doctor, has made a video with a message for South Asian LGBTQI communities. Further videos have been added today, including from Babita Sharma, BBC Newsreader.

Many of the initiatives will be online and cover subjects from food to music and fashion and art.

Not only will SAHM celebrate South Asian culture but also raise awareness and initiate debates on issues such as colourism, identity and Partition.

Rani said: “I’m so proud to be part of South Asian Heritage Month. So we can share our stories and expand our knowledge of what it means to be British Asian. It’s an opportunity to celebrate who we are and remind everyone that we help put the Great in Great Britain.”

Singh and Kane added: “South Asian Heritage Month will be a time to celebrate, commemorate and educate, and with one out of every twenty people in Britain having South Asian heritage, the month is important for all of us. Let’s make it a month to truly remember.”

There will be a range of different activities, including theatre initiatives and other creative projects as part of the programme – among them is Sudha Bhuchar’s award-winning ‘Child of the Divide’ and it will take place in August.

There is online page with details about SAHM art and culture (see link below).

Manchester Museum and The British Council are supporting and you can find out about events and programmes from the museum’s website (see link below).

The campaign for SAHM came out of two separate groups which have come together – The Partition Commemorative Campaign (2018), founded by Dr Kane, and Singh’s The Grand Trunk Project, formed a year earlier.

Dr Kane’s family story was uncovered in a moving BBC documentary, modelled and made by the same programme-makers behind the BBC’s ‘Who do you think you are?’.

Anita Rani also featured and has been a vocal campaigner for people to know more about the history of South Asia ever since doing an earlier ‘Who do you think you are?’ and stopping short of visiting Pakistan at that time. (See the link below for more).

The more recent programme covers her and her mother going to Lahore and her family village in that part of Punjab for the first time to find out what happened to the family at the time of Partition.

In 2017, the BBC commissioned a series of programmes recognising 70 years of the Partition of India and the departure of British rule of the sub-continent.

Singh’s Grand Trunk Project brings together people and communities who once formed part of the Grand Trunk trading route.

It brings together a range of different community groups, fostering dialogue, understanding and friendship.

There is also a jobs, training and work experience component for people aged between 11-25. Manchester Museum and The British Council have co-ordinated.

Dr Kane launched the campaign at the House of Commons in 2018 on August 17, aiming to mark the day the Radcliffe boundary was published, proposing the newly created borders between Pakistan, and East Pakistan and India.

“The British South Asian community is over three million people strong, and the aim of SAHM is to raise the profile of British-South Asian history, heritage and identity through education, arts, culture and commemorations across the country,” it said in a press release.