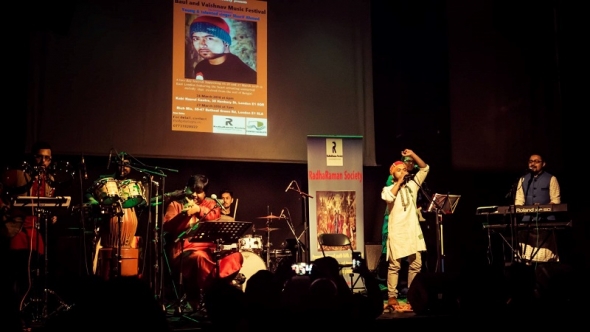 THERE’S A WEEKEND music festival in East London with two significant but rarely acknowledged traditions in the UK being celebrated.

The Radha Raman Society presents the Baul and Vaishnav Music Festival, which starts this evening and continues tomorrow.

Curator Ahmed Kaysher told www.asianculturevulture.com why it was spiritually and politically important to present these traditions to a UK audience.

Both have major philosophical underpinnings – from Sufi Islam and Vaishnavism, a branch of Hindu theology.

Kaysher agues these traditions have faced challenges on the sub-continent from TV and other forms of possible entertainment as well as some with more religious objections. He said that a modern economy has decimated a lot of rural and small groups who were immersed in both traditions and made a living from them.

Imtiaz Ahmed, one of the vocalists for the Baul and Vaishnav Music Festival

“The Beat Generation that includes Allen Ginsberg were also hugely influenced by the music and philosophy,” added Kaysher.

Poet and activist Ginsberg spent time in Kolkata and Bengal in the 1960s. His experiences and others who associated with him are detailed in a brilliant book, ‘A Blue Hand: The Beats in India’ by American Deborah Baker, (who also happens to be novelist Amitav Ghosh’s wife).

The philosophy practised by both traditions espoused openness, compassion and promoted the idea that God could be found in serving and helping others and that love of mankind was a universal value.

Kaysher explained: “The music offers a non-communal message of wider humanity, too; we can possibly quote one of the foremost Baul composer Lalon who sang more than two hundred years ago: ‘Everyone asks: Lalan, what’s your religion in this world?’
Lalan answers: ‘How does religion look?’
‘I’ve never laid eyes on it.
‘Some wear malas [Hindu rosaries] around their necks,
some tasbis [Muslim rosaries], and so people say
they’ve got different religions.
‘But do you bear the sign of your religion
when you come or when you go?’

Kaysher said he comes from an area in Bangladesh where brasher forms of entertainment have come to dominate popular culture and he laments the passing of old traditions steeped in a love for humankind.

It’s only the second year of the festival but Kaysher said it has struck a chord. He promoted the festival among the followers of Saudha, Society of Poetry and Indian Music, an organisation he helped to found.

“Our audiences are very mixed and we have many white people too and we got wonderful feedback.”

The festival is free. It opened last Saturday at the Nehru Centre and continues.