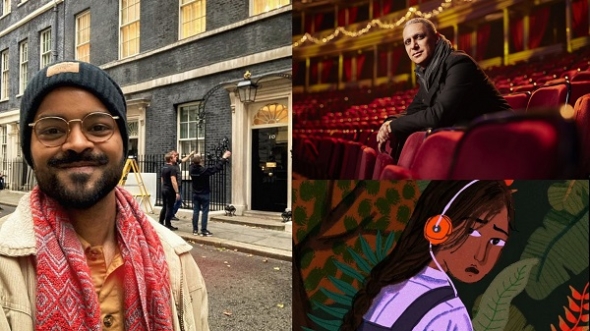 MUSICIAN Soumik Datta has just launched a new short animation film – his first ever – to draw attention to the Climate Emergency ahead of the United Nation’s Cop 26 meeting in Glasgow next week.

Commissioned by the British Council, and called ‘Songs of the Earth’ and made also to accompany his new eight track album with the same name, it has already won an award and the musician was recently at a briefing at No10 Downing Street to discuss Climate Emergency issues. He releases a new clip today (October 26) from the film at 3pm BST. (See channel link below to watch). In the film and the album, he wants to show how we are all connected as humanity and that together we can face the challenges of the future.

Datta will host a premiere screening of his film at Cop26. Cop26 is the UN’s conference on global climate change, and the conference of the parties, as it is officially known.

The thirteen-day summit starts in Glasgow on Sunday (October 31). and will seek to broker an agreement by around 190 countries to reduce carbon emissions collectively and stop the planet from warming beyond 1.5C in the next decade and thereby avert more extreme environmental events.

The sarod player also features as one of a dozen or so selected artists celebrating 150 years of the Royal Albert Hall (RAH), as part of Ivor Novello Award-winning musician and composer Nitin Sawhney’s curation week there, celebrating Immigrants and all part of the Journeys Festival strand hosted by RAH.

Datta will be performing on Sunday – (see below for more on other Journey Festival events at RAH). He will be playing tracks from his new album, ‘Songs of the Earth’ and will play a clip from his animated film at the Elgar Room at the RAH.

He told the nation’s village hall, as it likes to call itself, that his mother tongue is not Bengali (his family are originally from West Bengal) or English, but “it’s a form of sound”. And it’s a “language without walls or borders, the only place I can truly call home”, he declared.

Datta added: “To celebrate the sound of immigrant heritage with Nitin Sawhney at the Royal Albert Hall is to celebrate our homes, now and before, the journeys of our parents and grandparents and the stories of new generations to come. Thank you for inviting me to this incredible and urgent festival!”

Datta is set to launch his album, ‘Songs of the Earth’ on Tuesday (November 2) and the video clips have been dropped to draw attention to the plight of communities living in the shadow of imminent and catastrophic climate change. Datta highlights the potentially fatally consequences of not acting now to stop pollution and further environmental damage.

A near 5-minute trailer clip called ‘Oceans Rising’ of the full 24-minute film, ‘Songs of the Earth’ dropped this Tuesday (October 26) on his Youtube channel. (See link below).

It shows a scene from the full-length film with a girl called Asha, “a young climate refugee from Bengal as she searches for her missing father through the flood banks of the Sunderbans delta, burning forests and melting polar ice caps”.

Datta explained: “I feel the arts have an important role to tell their stories, while generating hope, inspiring empathy and driving grassroots communities to demand for a better future.

“As an artist, I want to gather people, physically and digitally, to immerse them in sound and space – to make them feel connected and part of one earth, one tribe, one people, one hope.”

Datta wrote, directed and scored, ‘Songs of the Earth’, the animated film, and had a whole creative team which helped him to put the music and animation together. It was made in association with Earth Day Network India, Hawkwood Centre and The Space.

Datta’s ‘Silent Spaces’ was a series of short films all about emerging from lockdown and has incredible music, spoken word and striking images of buildings and people entering into the light after a period of sustained darkness. We talked to him about these remarkable six films. (See the lvideo at the end).

Journeys curated by composer and artist gets under way tomorrow…

NITIN SAWHNEY’S Journeys has been a year in the making and it isn’t just about concerts.

The curtain raiser tomorrow (Friday, October 28) sees the music maestro take to the main stage with a line of up artists and celebrities in support.

He will play music from his album, ‘Immigrants’ as well as tracks from his seminal ‘Beyond Skin’ which electrified the hall when he played an anniversary gig at RAH.

On stage, he will be joined by BBC radio presenter Nikki Bedi who will quiz about him his music and his views on Immigration.

There will be poetry readings too from long time friend and ‘Unforgotten’ star Sanjeev Bhasker, as well as Hollywood’s green screen special effects actor to go, Andy Serkis, and soul singer Aruba Red.

On Saturday (October 30) Sawhney will head a panel consisting of Serkis, who has also directed several movies including the latest Venom title – ‘Venom: Let there be carnage’; Aruba Red; and saxophonist and broadcaster YolandDa Brown. They will discuss the theme of Creative Journeys in the Elgar Room. Following on from this, Sawhney will participate in another discussion about Immigrant Journeys – Context and Heritage with filmmaker and producer, Sonita Gale; award-winning and Saatchi Gallery resident poet LionHeart; and documentary maker Dina Mufti.

On Sunday morning (October 31), the focus will be Grenfell Aftermath. Sawhney will be joined by artist and portraitist Paul Benney, whose painting of Grenfell Tower, ‘The Sleep of Reason’ is displayed as part of the Journeys Portrait Series (see more below). The debate will be chaired by Fatima Elguenuni, family therapist and Islamic psychotherapist.

Later that evening Datta will take to the stage.

Also playing at the Elgar Room on Thursday, November 4 evening, as part of Journeys is Manu Delago – the world renowned handpan player and composer. Delago is a musician of wide experience and has played alongside Anoushka Shankar and has an affinity for Indian classical music. Delago says he moved from his native Austria to London to tap into the diversity London offered and widen his musical knowledge.

Next Friday (November 5) there is ‘Lullaby – Sonic Cradle’. In the Elgar room, you will be invited to relax and wind down with vocals inspired by traditional Indian lullabies. The contributing artists are Supriya Nagarajan on vocals and Duncan Chapman with sound and Lucy Nolan on harp. Subsidised tickets are available.

The curtain comes down on Journeys with Avawaves playing at the Elgar Room next Saturday (November 6). Avawaves is made up of Anna Phoebe and Aisling Brouwer, whose classical and cinematic influences on piano and violin has proved extremely popular. They are both Europeans who have settled in Britain and said they were hugely honoured to be part of the Journeys Festival curated by Sawhney. This concert is sold out however.

As well as the concerts and talks, there’s a chance to see the Journeys Portrait Series in the ground floor corridor of the RAH. The pictures of artists, writers, community workers and activists among others to name but a few, has been shot by RAH artist in residence Denis O’Regan, a well-known pop artist photographer. The exhibition runs daily from 10am to 4pm and comes down pm Sunday, November 7.