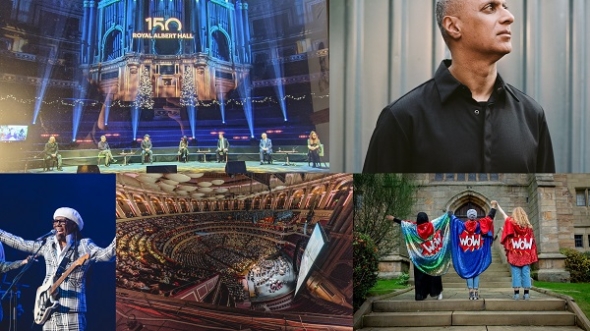 MULTI-TALENTED musician and composer Nitin Sawhney is to curate a week-long celebration of concerts and events recognising the contribution of immigrants as part of 150th anniversary celebrations of the Royal Albert Hall (RAH) next year.

Called ‘Journeys – 150 Years of Immigration’, it will take place in the late Autumn of next year – Sawhney has indicated it will be in October/November on Twitter and his headline concert is listed for October 29 in the RAH 150 programme sent to the press*.

The wider celebrations, which will take place over two years from March 2021, will consist of a huge range of initiatives and events designed to mark the birthday of one of the country’s most iconic event venues.

On Thursday, (December 3) at a live virtual press conference, Craig Hassall, chief executive of the RAH, called it a celebration of the “nation’s village hall”.

The original building was opened by Queen Victoria in 1871 and named in memory of her husband, Prince Albert, whose vision was for the venue to both “democratise and promote the arts and the sciences”. The present Queen has written an introduction to an anniversary book, published this month, and paid tribute to its work and saluted its ambition of keeping alive Prince Albert’s vision.

For the first time since it has been built, the RAH was shut down because of the pandemic – the only time it closed its door before was when the country was at war, 1939-1945.

Present at the press launch at the Royal Albert Hall itself, Sawhney said he was excited and honoured to be playing a part in the 150th anniversary celebrations.

He has been commissioned to compose an oratorio, for strings and choir, to be performed in a special headline concert in which he will perform.

He said he would be playing tracks from his latest album ‘Immigrants’, and added that he would be inviting guest performers to appear during the special week celebrating immigrants.

Among those he said he will be showcasing are sarod player Soumik Datta, Manu Delago, Hang (a steelpan type of instrument) virtuoso, who has played with many South Asian musicians, cellist and vocalist Ayanna Witter-Johnson; Ava Waves, made up of Anna Phoebe and Aisling Brouwer, musicians and composers who have worked with Sawhney previously.

Sawhney enthused: “I’ll be working with artists I admire and who have sympathy with immigrants and want to celebrate them, rather than demonise them.”

He explained that the venue had a special place in his own heart.

“I think it’s very important to recognise the contributions of immigrants throughout history and particularly relate it to the 150 years of the diversity of the artists who have performed here.

“I remember with my own Proms many years ago, bringing my own tabla player in and having Indian classical musicians playing here and that was very important, because I grew up seeing the Proms in a certain way and then having that epiphany moment of seeing it in a new light and that was very exciting and made me feel there were a lot of possibilities in saying something that has real meaning on this stage.”

Hassall said of the celebrations: “Since its opening, this extraordinary venue has borne witness to, and played a central part in, seismic cultural and social change. The interests, manners and social mores of the people may have changed, but this beautiful building and what it represents remains the same a century-and-a-half later: a meeting place, a reflection of contemporary Britain, and a home for exhilarating live performance and events of international significance.”

The 150th anniversary programme will formally begin on the RAH’s actual birthday of March 29 2021 with ‘Sherlock’ composer David Arnold and his ‘A Circle of Sound’ concert performed by a full orchestra, the National Youth Choir and “a cavalcade of guest stars from the worlds of stage and screen”. This work has been a year-long collaboration with local schoolchildren, community members and Chelsea Pensioners. He spoke about his work with them at Thursday’s press launch.

As well as Sawhney leading one strand, choreographer Matthew Bourne will lead another – mounting his new work, ‘The Car Man’ which he described as a “musical dance thriller”. It is a take on Bizet’s classic opera, ‘Carmen’. It will be staged at the RAH from June 17-27.

Lucy Noble, RAH artistic and commercial director, announced a tie up on International Women’s Day with the Women of the World Festival. It will present a special show at RAH with a galaxy of artists and speakers on March 8.

Scottish singer-songwriter KT Tunstall will lead a new mentorship programme for new young female artists. She told the press she was thrilled and excited to be heading up such an initiative and sang Happy Birthday to RAH in a recorded video excerpt that played out Thursday’s press launch.

Star and British music icon Nile Rogers will compose a pop anthem marking the anniversary and will have access to a full orchestra and singers from across the community.

The press launch also heard from veteran music industry impresario Neil Warnock, who is chair of the 150th celebrations organising committee. He spoke about how the place charmed him as a working class lad from a London estate, who fell in love with the RAH, seeing Chuck Berry there many years ago. And the live section of the press launch ended with young musician Kate Stables, speaking from Paris on a feed, talking about how she would conduct workshops with teenagers at the RAH and her vision of helping young musicians perform there. The press launch was moderated by Brenda Emmanus.

In 2019, Sawhney played an 20th anniversary concert marking his performance of his seminal album, ‘Beyond Skin’. It proved to be a very special occasion that www.asianculturevulture.com was thrilled to review.

Sawhney last played the Proms most recently in 2007, in an ‘Evening with Nitin Sawhney and Friends’ among them with him that evening were Anoushka Shankar, Akram Khan and Reena Bhardwaj.

Last year, acv covered the packed live orchestra accompanied screening of the international Indian mythological blockbuster, ‘Baahubali’. You can see see the pre-screening Q&A with the filmmakers and stars on the RAH stage here and an interview with three of the film’s leads – Prabhas, Anushkha Shetty and Rana Daggubati here.

Indian music star Sartinder Sartaaj, one of that country’s biggest selling artists, is set to return to the RAH for his first concert since his debut in 2014. He is scheduled to perform on May 30.

For more information on announcements and news on the RAH 150 and tickets, see http://www.royalalberthall.com

Pictures: All RAH, all except those marked screenshots

Privacy & Cookies: This site uses cookies. By continuing to use this website, you agree to their use.
To find out more, including how to control cookies, see here: Cookie Policy
← Aparna Sen: Sticking to my guns and making the films I wanted to – leading Indian director tells BFI…
Superfan – The Nav Bhatia Story – you cannot help but love this guy! →