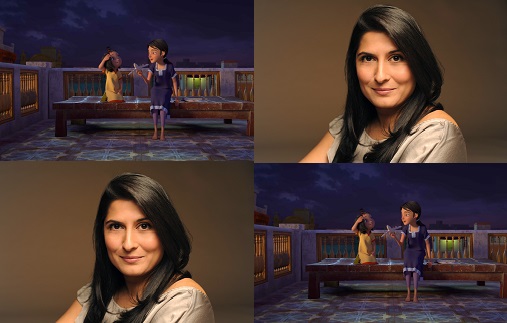 TWO-TIME Oscar winner Sharmeen Obaid-Chinoy hopes her latest work will help to fight the scourge of child bride marriage around the world.

Viewable on Netflix for just over a month now, director Obaid-Chinoy told www.asianculturevulture.com her animated short, ‘Sitara’ Let Girls Dream’ was a clarion call for all those seeking to challenge what to many is an abhorrent practice – but still passes as tradition in some societies.

The 15-minute film has no dialogue and features a young girl flying a kite above the old part of Lahore and the story is told through the perspective of ‘Mehr’, whose 14-year-old, older sister, ‘Pari’ dreams of becoming a pilot. It is clear, from the film though, that her father is planning Pari’s wedding with a much older man.

“Sometimes, when you want to talk about an issue like child marriage, I think you need to find a way to tell that story in a softer way and so that’s what we concentrated on – the dreams of young girls,” Obaid-Chinoy told www.asianculturevulture.com

Her first international animated feature is aimed at a global audience of both children and adults.

“Animation allows you to speak to two audiences, adults and children, and allows you to create a world and characters people can immerse themselves in

“I felt it was important to tell a story how young girls are still being robbed of their dreams – but through animation which is considered a non-threatening medium,” she told acv, speaking on the phone from Pakistan last week.

She continues to ask urgent and basic questions about women and girls everywhere.

On the day we speak, there is a media report out of France that domestic violence has rocketed there because of the Corona Virus lockdown and in the UK too, anti-domestic violence charities have called for Government to do more to protect vulnerable women.

“There are so many stories left to be told and the fact is if there is one thing that unites women around the world, it’s that women are still ‘off stage’, and still have to face a glass ceiling and have to endure massive inequalities – even today, even in the First World.”

Obaid-Chinoy hopes to take the film on the road with her mobile cinema – she has a truck that can both display films and can screen the films inside the truck to a select audience (usually for women only she explained in her recent Ted Talk.).

She has singlehandedly raised the international profile of Pakistani filmmaking – with her hard-hitting short documentaries, ‘A Girl in the River: The Price of Forgiveness’ (2015) and her first Oscar winner, ‘Saving Face’ (2012). Both these films also won international Emmys.

The move into animation is deliberate and strategic – she has been keen to extend her reach, and told us as much when she came to Britain and a screening of ‘A Girl in the River: The Price of Forgiveness’ for the 2016 edition of the London Indian Film Festival (LIFF).

Waadi Animations is the company she has set up to foster the nascent animation industry in Pakistan. The company has enjoyed success with the franchise, ‘3 Bahadur’ – creating a full-length trilogy of films and animated characters for home audiences.

‘Sitara – Let Girls Dream’, has been a collaborative work featuring a raft of international input from animation to production and finance (Vice Studios).

“It’s not like we have institutions that teach animation in Pakistan, so I got a lot of mentors from around the world who spent time speaking on skype with the team (at Waadi).

“We had frequent power outages, lost sequences, and computer and hardware issues, but the one thing we had was determination to finish the story,” said Obaid-Chinoy.

Her team at Waadi, which number around 40, is now working on its next international animated short, entitled, ‘The Secret Nightingale’.

“We’re in pre-production for that and we are reassessing what we can do and when we can go back to it,” she told acv.

As for her documentary work, she has just finished a series for Youtube Originals and website, Refinery 29 (part of Vice Media).

In ‘Fundamental’, she has directed five shorts focusing on women who are fighting for basic rights.

She is unquestionably the best-known international filmmaker from Pakistan – and a powerful advocate for equality.

What is it that drives her and how does she assess success herself, we ask.

“I feel like more than a filmmaker, I am a storyteller and I want to dabble in as many mediums as possible.

“In this journey of being a documentary filmmaker, I’ve interacted with men and women who are my personal heroes and they have risked their lives every day to create a better tomorrow for their grassroots community.

“It’s because of their infectious energy and ambition that I do the stories that I do.”

She said change can come through different means – whether that be through legislation and conventional politics, or people just becoming more conscious.

“It (film) can change the way people can see issues, and it is able to move legislators into action.

“We can educate, inform and inspire people to take steps that need to be taken.”

Gucci has supported the film as part of its Chime for Change campaign – more here #LetGirlsDream http://www.LetGirlsDream.org