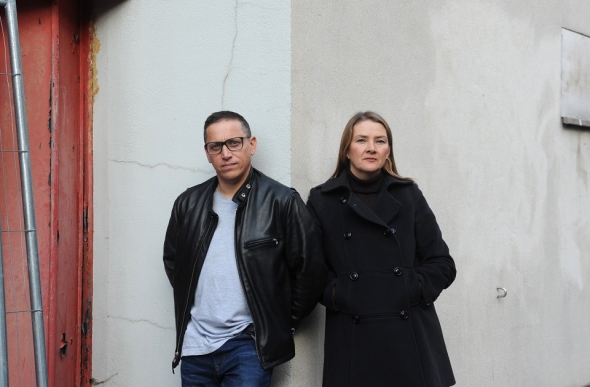 “If you die waging Jihad, your faces will glow like the moon. Your bodies will emanate scent and you will go to Paradise,” attributed to Hazif Saaed, preacher.

*The bodies of the slain terrorists were never claimed and were buried in some unknown location, it is thought not far from the carnage they inflicted.

One of the world’s most iconic hotels has been taken over by a group of heavily armed terrorists who are picking off guests like it is just a computer game.

But no – this was reality at about 9.45pm on November 26 2008 at the Taj Hotel in Mumbai and it forms the focus of a brilliant new book called ‘The Siege’ by British journalists Adrian Levy and Cathy Scott-Clark (pictured).

Assiduously assembled and written with all the pace of a fictional action thriller, it’s likely to become the definitive work describing the attack on the Taj Palace Hotel by a handful of well-trained and carefully drilled terrorists, who were indoctrinated in Pakistan and squeezed into India like a deadly cream.

‘The Siege’- Three days of terror inside the Taj’  takes on some of the biggest questions – was Pakistan at a state level, involved? Could more deaths have been prevented? Has India learnt from the attacks and is it now in a position to effectively prevent or repel them?

Scott-Clark told www.asiancutlurevulture.com bureaucracy, poor leadership and a muted initial response led to 166 people (33 in the Taj) losing their lives, leaving more than 300 injured and a city bursting with more than twice the number of people in London, in shock and paralysis for three days.

The book also gives a superb account of what exactly happened inside the Taj, almost by the hour, talking to many of those who survived, as well as looking at how and why the plot was hatched by terrorists in Pakistan.

There are many amazing personal stories of survival and triumph against the odds, but there are also details of how ruthless and merciless the terrorists were on what they always knew would be a suicide mission.

The authors of  ‘The Siege’ are very clear about one thing – India had ample warning that a major terror attack was in the offing and The Taj was cited as one of the prime targets for terrorists. It wasn’t just once or twice or a vague hunch.

Scott-Clark said: “There were 26 warnings into the Intelligence Bureau – a lot is made in India – with all those warnings – how the hell did they not improve security and especially around the Taj, as it was a named location. You have to roll back a little bit and say it is easy with hindsight. You could say the same about 9/11 or 7/7.”

The tip-offs came via the figure of David Headley – who is not known in the UK but is widely recognised in India and in the US as the man who made it all possible.

Born Daood Saleem Gilani in 1960 and of mixed race Pakistani-US heritage, he had a shady past drug running between the two.

Jailed, he nevertheless persuaded the US Drug Enforcement Agency he could be a useful informer and held out the possibility more latterly that he could help find Osama Bin Laden by making contact with radical groups.

Despite a very messy private life, he persuaded Lashkar-e-Toiba, which carried out the Mumbai attacks, he was genuine about Islamism and Jihad – he hated India – and convinced the group to make its first spectacular strike outside Kashmir.

Lashkar had been set up in 1990 by the Inter Services Intelligence (ISI, Pakistani’s secret service) to fight Indian troops in Kashmir.

It was Daood who made such a multi-pronged assault practically possible by travelling to Mumbai as David Headley under his US passport. Tall, and fair, he dressed and behaved much like a freewheeling American looking for adventure and opportunity.

He did all the reconnaissance, selecting targets and providing all the GPS satellite co-ordinates the terrorists needed.

“Without him, it would never have happened,” said Scott-Clark. “He’s not a trained commando, he’s just a guy who spots an opportunity and he is very bright.

“He is real chameleon character and all the time he is watching his own back and looking to promote himself.

“They (the US) did know what was going on but in how much detail (it is hard to say), but the warnings to the Indian authorities came almost exclusively from Headley material and that he was working for Lashkar.

“He was prone to making big statements about launching an attack on India’s commercial heart and storming onto the world stage – they thought he was crazy to start with – because Lashkar’s focus was Kashmir.”

Yet the internal politics Of Pakistan had changed since 9/11 and the attack on The Red Mosque in 2007 showed that the state and army were waging their own battle against extremism and violence under President General Pervez Musharraf.

Headley/Gilani, whose Pakistani family had long disowned him (in his drug dealing days), was arrested in October 2009 in the US, trying to make his way to Pakistan.  He was jailed by the US earlier this year for 35 years for his role in the plot.

One of the urgent questions has always been – how much did Pakistan at an official level know.

“It’s wrong to say that the Mumbai attacks were an institutional decision of any organisation in Pakistan – that’s not true. It was not an ISI attack – that is lazy journalism,” stated Scott-Clark.

“It was an attack orchestrated by Lashkar undoubtedly, and an attack that was supported and aided both with money and training and general advice by people within the ISI, who are sympathetic to these groups.”

Levy and Scott-Clark know the terrain well – as foreign correspondents for both The Guardian and Sunday Times – and have authored books on Kashmir and documented its troubles and human rights abuses for television most recently.

In the book, there are a veritable cast of ISI operatives, some retired, others more loosely connected – who assisted Lashkar – but one figure who has been cited as a senior serving ISI officer and who was intimately involved in preparing for the  Mumbai attacks remains at large – no one knows who Major Iqbal is and what he is doing now.

Since the attacks Pakistan has arrested 10 suspects but Hafiz Saeed, widely seen by many, including the US which has $10m bounty on his head, as the man who inspired the terrorists, remains largely free.

Scott-Clark said Pakistan’s Federal Investigative Authority (FIA), charged with looking at Pakistani involvement, has tried its best, but investigations are too sensitive to probe too deeply and the murder of FIA investigator and prosecutor Chaudhry Zulfiqar Ali, who was also investigating the murder of former prime minister Benazir Bhutto, have dealt another blow.

“It’s been going on for five years, no one has been prosecuted. They will have to deal with this eventually, but they are dragging their heels because they are frightened that if they get these people to stand – what are they going to say – are they going to say Major Iqbal from the ISI trained and helped me.

“We tried really hard to identify him – he’s out there – definitely. Even if it is a terrorist court, some of this information is going to leak out and it’s of great fear in Pakistan. The last thing that anyone wants to hear is that Pakistan knew this was going to happen and this was government sponsored.”

Scott-Clark said a reported meeting between army chief Ashfaq Kayani and one suspect in ‘detention’ Zaki-ur-Rehman Lakvi, the military commander of Lashkar looked to some like proof that Pakistan had foreknowledge of the attacks.

“I don’t believe that,” Scott-Clark declared. “I think the army chief went in and said …What the Hell? Now look at all the problems you have caused us by this attack – for which we are being blamed.”

The pair spent months in Pakistan and interviewed Saeed who increasingly has raised his profile – perhaps to subtly warn the authorities he won’t go quietly.

“He can say, well, you show me the proof that I am connected to any of these attacks,” explained Scott-Clark.

“He has never been involved in any type of military operation. He inspires through his speeches. For some it seems crazy he can carry on and spout off, but he won’t get arrested – he is too powerful.”

Ajmal Kasab was the only one of ten terrorists captured alive and was hanged by India last year after being convicted of 80 offences.  Kasab and a fellow terrorist gunned down 58 people at one of Mumbai’s main train stations.

Scott-Clark and Levy tell in superb detail how the boys – no more than (Kasab was 21)  – were recruited and pumped for the terror mission.

Originally, there had been around two dozen who had started training but some had fled, while others had been retrieved by worried relatives.

“It’s all about poverty and having no opportunities – if you put yourself in their position they are from a poor village in Punjab right next to the border with India, and all you get thrown at you is how great India is and how terrible Pakistan is and you are working in the field in some half-baked job and some people come in a shiny truck with weapons and you know they are from Lashkar and are considered heroes for their role in Kashmir and they say come, have a different life with us.”

Scott-Clark said India has not really learnt enough from the attacks – a government report into the Mumbai attacks was just 64 pages long and Indian bureaucracy stifled a faster response which could have saved more lives.

“So many people have not even been questioned  – it (the government investigation) was a whitewash.

“Police on the night did a great job of saving people in the Taj but they still don’t have helmets, and still have World War II rifles and no bullet proof vests.

“They were overwhelmed on the evening, as any police force would be – but there was a breakdown in communications – waiting for special forces.

“They could have been there but they couldn’t move because the Maharashtran (state) government had to be asked. It was the bureaucracy.

“There was poor leadership on the night, but look at look at the 7/7 inquest, there were just as many failings, I don’t want to be seen attacking India, but they have to go through the issues of security, issues of bureaucracy and streamline it to respond to a crisis like this which will happen again – look at the Nairobi attack .

“This is the kind of terrorism every country faces and it needs a crisis response plan.”