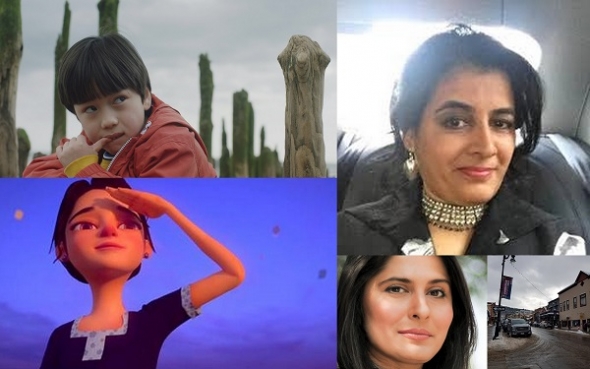 British music composer has latest film in festival, while Obaid-Chinnoy is presenting a new short at a special event and dicussion…

THERE IS something for the discerning observer of film diversity at the Sundance Film Festival which opened yesterday (January 23) and runs until February 2 – even if all the early headlines are dominated by pop star Taylor Swift’s appearance as the documentary about her, ‘Miss Americana’ enjoyed its world premiere there last night (Park City is -7 hours GMT).

Widely regarded as the festival to premiere an independent film – at least in the West, it pretty much opened yesterday with ‘Crip Camp’, the documentary about a hippy style gathering close to Woodstock in 1971 and from which the disabled rights movement in the West sprung.

Executively produced by the Obamas (under their production outfit, Higher Ground, which also produced the Oscar-nominated documentary, ‘American Factory’) and Netflix, it opened to warm reviews. Sundance Film Festival founder Robert Redford introduced the film and will be present during the festival – but there was no opening customary press conference wth him leading the way. ACV attended the last.

Elsewhere, there is a line-up with strong elements of diversity – especially in the African-American space and the festival has produced a set of figures that show progress is being made with the number films screening at the festival – and either being helmed by black directors or having significant people of colour in the leads – or indeed both.

Among those in the windy peaks of Park City (some 2,000 metres/7,000 feet above sea level and an upmarket ski resort), Utah – this year are rising British music composer Nainita Desai – whose score on the British-Syrian film, ‘For Sama‘ has best documentary film nominations in both the BAFTA and the Oscars.

She is attending for the world premiere of a new film she has worked on, called ‘The reason I jump’. It is a British-made film adapted from the best-selling Japanese book by the autistic Naoki Higashida. It is an immersive film that “explores the experiences of non-speaking autistic people around the world”, says the Sundance blurb.

Also from Britain, is emerging black director Remi Weekes, whose ‘His House’ has a prestigious midnight slot on Monday (January 27); and in other points of interest for diversity, is a short film from Nepal and outside the festival, but likely to arouse considerable interest is a screening for Oscar winner Sharmeen Obaid-Chinoy’s new short animated feature, ‘Sitara: Let Girls Dream’.

There are reports that ‘His House’ has already been snapped by Netflix ahead of its festival premiere on the Monday midnight slot (January 27/28).

Weekes’ story involves a refugee couple from Sudan arriving in a small English town and things going nightmarishly wrong. The Sundance preview describes it as a “stunning feat of genre alchemy” and more redolent of horror than any other genre. It features actors Wunmi Mosaku, Sope Dirisu and Matt Smith in the leading roles. BBC Films are part of the producing arm and Weekes co-scripted ‘His House’.

It joins a host of US American black titles causing something of pre-Sundance buzz – indeed this year the festival boasts 53 per cent of directors of colour in its US Dramatic features section and 38 per cent directors of colour are responsible for 56 of the total films playing in the competition sections.

Among these are films with significant black characters – many are the lead protagonists.

Another title attracting attention is ‘Bad Hair’ by Justin Simien (‘Dear White People’ 2014) and it played in the midnight slot yesterday (January 24).

Also screening at the festival is ‘Song of Clouds’ with Nepali director Ankit Poudel at the helm. The Milwaukee resident Poudel makes the step from cinematographer (on more than 20 films) to director and the film is described by Sundance as “a haunting visual fever dream, and a meditation on the afterlife, the journey to the next work and what gets left behind among the living”. A world premiere it screens later today (January 24).

On Sunday (January 26), Oscar winner Sharmeen Obaid-Chinoy brings her ‘Sitara: Let Girls Dream’ to a screening hosted by Gucci and Chime for Change in Park City.

Obaid-Chinoy and executive producer Ariel Wengroff and Equality Now global executive director Yasmeen Hassan will discuss the film with moderator Paola Ramos, Vice news correspondent and an invited audience. Obaid-Chinoy won Oscars in the shorts category for both, ‘A Girl in the River: The Price of Forgiveness’ (2015) and ‘Saving Face’ (2012).

‘Sitara: Let Girls Dream’ is a 14-minute animated film that according to its makers, “follows Pari, a young girl whose dream of being a pilot is crushed when she is forced into child marriage. It is the story of 12 million girls around the world who are married off as child brides every year.”

Among the star names at Sundance this year are Hillary Clinton (a documentary on her, ‘Hillary’) features, the creator of the global hit stage musical, ‘Hamilton’, Lin Manuel-Miranda (who is the subject of three documentaries), US ‘Veep’ comedy star, and ‘Seinfeld’ icon, Julia Louis-Dreyfus and Hollywood comedian Will Ferrell in the eagerly anticipated comedy drama, ‘Downhill’.

And on Diversity & Inclusion

A panel will discuss, ‘Has recent industry emphasis on D&I influenced storytelling’. The Sundance Institute has joined hands with Easterseals Disability Services – recently announced as a member of the the Institute’s Accessibility & Inclusion Alliance – to talk about the good, the bad, and the still not happening on diversity and inclusion in the film industry.

This year’s line-up doesn’t quite include the rich pickings last year when acv was in Park City to cover the world premieres of ‘Blinded by the Light’ by Gurinder Chadha, ‘Late Night’ written and starring Mindy Kaling and directed by Nisha Ganatra; ‘Photograph’ by Ritesh Batra (of ‘The Lunchbox’ fame) and there was also in the TV episodic strand, Richie Mehta’s seminal Netflix offering, ‘Delhi Crime’ – about the horrific 2012 rape case. It enjoyed a world premiere in Park City.

All these films made early waves and Mehta’s got a deal the day before its first screening at Sundance, while Chadha’s ‘Blinded by the Light’ and Kaling’s ‘Late Night’ bagged multi-million pound distribution deals but didn’t ignite cinemagoers in the way that they did at Sundance last year.

More about ‘The Reason I Jump’

Click on the picture to see the latest gallery from Sundance