THESE images aren’t exactly new but for the first time you will be able to see them in the glory that they deserve – in a gallery and together.

“The Singh Project” was devised and conceived by photographers Amit and Naroop and consists of 35 unique portraiture shots capturing the diversity and many moods of their Sikh subjects.

Drawing back to their own Sikh roots, they wanted to document the depth and breadth of British Sikhism, its variety and scope.

Asa Singh The Singh Project by Amit and Naroop

They said: “Many religions determine the way their followers look, but none have such a dramatic and definite look as Sikhism. And yet with 30 million Sikhs in the world, there are almost as many ways to wear the turban and beard as there are Sikhs. We wanted to capture the essence of modern ‘Sikhness’ and to pay tribute to the beauty and variety of Sikh men.”
Their usual subjects are musicians and celebrities from 50 Cent to Ricky Gervais and they shoot advertising campaigns for big and well-known corporations such as MTV, Sunsilk and Huawei but this is personal and about the community to which they proudly belong.

One of their portraits – of student Ishtmeet Singh Phull took third palce in the Prix de la Photographie Paris competition last year. The Singh Project raised £10,000 through its kickstarter campaign.

The Singh Project – Singh, the beard and the turban, Sikh Men by Amit and Naroop at The Framers Gallery, 36 Windmill Street, London W1 2TJ, runs from November until February 15 between 10am-5.30pm.
*If you can’t make it see the pictures at http://www.singhproject.com/images

Naroop Jhooti and Amit Amin
Naroop of Amit and Naroop, told www.asianculturevulture.com how the project had developed. “It started as a community thing and we wanted to do something that reflected us and our heritage.
“Working in mainstream photography, there are very few Indian/Asian photographers, and no one really knew who we were.”
The two recently went on BBC World to talk about the project and were overwhelmed by the fact that an audience of about 250 million would come to learn about The Singh Project.
Naroop said they also wanted to show the wearers of Hoxton beards that Sikhs were cool long before it was on trend and de rigueur for anyone wanting to be part of the fashionable set.
“It was a way of standing out and saying, I am a Sikh.”
“We’re not going to extend this but we plan to take it to the US because 75 per cent of our funding from Kickstarter came from there.”
There was a great turnout for a special viewing on Thursday with many family and friends and many of the subjects of the portraits attending too.
It’s good to see Sikhs take centre stage and be celebrated in this way – most of the time, they remain very much in the background and the words, ‘shy and retiring’, seem apt to describe them as a community – at least in Britain. 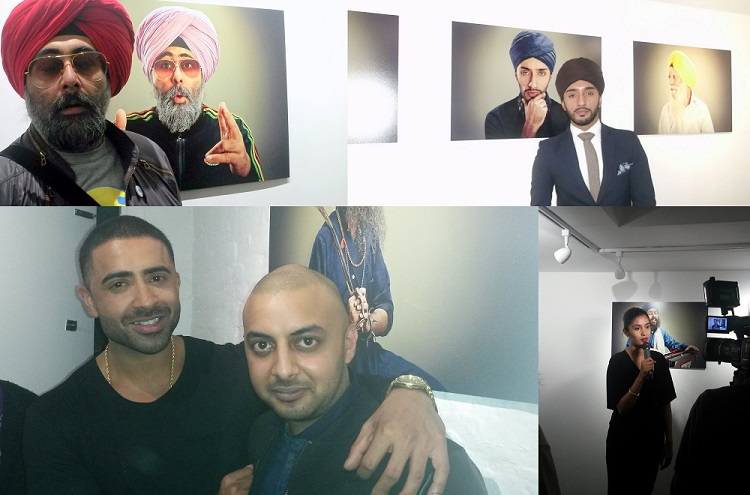