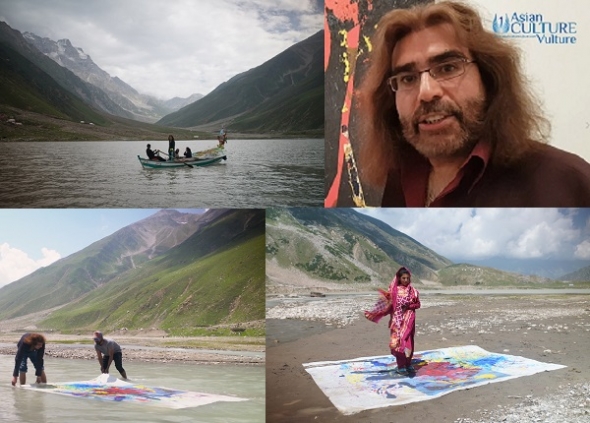 IT IS ONE OF THE HIGHEST lakes in the mountainous region of Kashmir and artist Nasser Azam’s latest exhibition is the most recent and contemporary articulation of a rich tapestry of ideas, culture and beliefs that have inspired many.

The exhibition called ‘Saiful Malook’ can be seen for free at the Saatchi Gallery in London until next Monday (June 10).

Azam who travelled to Saiful ul-Malook, the name of the lake in Pakistan Kashmir, was himself drawn to the region by two other artists, one a musician of global renown and much admiration even today, the great late Nusrat Ali Fateh Khan (1948-1997).

It was Khan who popularised the tradition of Qawwali in the West and reinvigorated it on the subcontinent (his nephew Rahat is widely regarded as a leading proponent of Qawwali today and enjoys global attention too), and Nusrat made it a recognisable genre which still has many millions of admirers and adherents across the world, both among the diaspora and the wider world, at large.

Intrigued and first inspired by Khan’s music, it prompted Azam to look into the background of the poet, Bakhsh.

“I found that he was born in the same city as myself, Jhelum (in Pakistan),” Azam told www.asianculturevulture.com at the private view on Thursday, on the eve of the public opening (May 30).

“I really reconnected with the underlying themes of the poem – struggle, passion, sacrifice.

“It is a complex piece of Punjabi poetry by Mian Muhammad Bakhsh. He wrote 18 books of Punjabi poetry and one in Persian. The most famous of these was ‘Saiful Malook’ (sometimes also written as ‘Sayful Muluk’ and named after the lake).”

In fables well-known across the region, there was a Prince of Persia, who dreamt of a beautiful damsel and went to search for her – giving up his kingdom to do so and embarking on a journey that would take years.

Behind this easily understood story lies a deeper and more spiritual one, posits Azam. And the Prince’s story and the lake became conflated in the popular imagination.

“It translates as the journey of divine love, and on the surface, it is a typical love story. The underlying themes are struggle and sacrifice and perseverance. And the pursuit from the metaphysical to the physical.

“At one level, it is about the prince undertaking an epic journey to find this fairy princess from his dream.

“And it is about various struggles, physical and emotional.”

For Azam too, there was a deep personal connection.

“I came to Britain when I was six-years old and there were a lot of sacrifices to be made and I had to adjust to a new environment and the poem is ultimately about how that commitment and perseverance usually pays off,” he explained. He was returning to Pakistan after an absence of 25 years.

Azam is sometimes referred to as a ‘performance painter’ but stresses it is not his natural working state.

He told acv that two of the current works on display were created in and around Saiful Malook. Most were painted since his trip to the region in August 2018 but were deeply inspired and imagined there.

“I kept the palate quite dignified and simple – using primary colours and I am trying to capture the underlying themes of the poem in my paintings,” he explained to acv.

The exhibition of mostly paintings is spread across two rooms in the upper section of the Saatchi Gallery and there are more than 30 works on display.

Azam travelled to the region with British India musician and composer Soumik Datta and filmmaker brother Souvid, who is also a musician.
Azam explained why he wanted Soumik with him.

“I wanted to make this journey a collaboration and I was inspired by music and so it seemed appropriate to have a musician with me and a friend curator at the Victoria and Albert put me in touch with Soumik whom he had worked with.”

Soumik is best known as a Sarod Indian classical musician and has collaborated with many musical artists, including Beyonce and Anoushka Shankar, among many other high-profile figures.

“The journey (with Soumik and Souvid) was itself very magical, very hard, emotional and creative,” revealed Azam.

A short film about the trip can be viewed at the exhibition and there are videos on Azam’s website too.

The three hope to work together on some kind of installation bringing their different art forms together – but we will have to wait for that.

Soumik and Souvid and mother Sangeeta Datta, an established filmmaker and Shabana Azmi, an Indian acting icon, attended the launch last Thursday (May 29).

Soumik’s own three-part documentary programme on the music of India is currently being broadcast on BBC4 and can be viewed on i-player. ACV readers will also know he and his brother made ‘Tuning 2 You’, a programme about Indian folk music traditions broadcast on Channel 4 in 2017. (Please see the link below).

Well-known for his official portrait of Malala Yousafzai, the Nobel Peace prize-winner and youth advocate, displayed at The Barber Institute of Fine Arts in Birmingham, Azam is a highly versatile and prominent artist of global standing.

In 2017, to commemorate the tenth anniversary of the i-phone, Azam created a series of artworks described as ‘Phone Painting’.

He began his career in the 1980s, with exhibitions in and around Birmingham and the West Midlands, and his work found a home at the prestigious Barber Institute of Fine Arts.

In 2007, he made a major breakthrough with ‘Anatomica’ while as an artist in residence at County Hall Gallery in London. He has made some paintings in extreme conditions – working in Antarctica (2010). His paintings can also be seen in the Altamarea Group of restaurants in SoHo, New York.