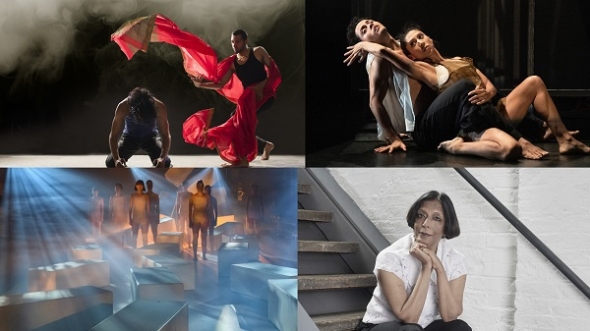 A global star and in demand in other countries, you can see her works, ‘Material Men Redux’, ‘Staging Schiele’ and ‘Contagion’, about the 1918 pandemic and war, online from tomorrow…

SHOBANA JEYASINGH makes beautiful and provocative work, and if you’ve missed seeing them live on stage, then you can content yourself with experiencing some of their work translated for the small screen through ‘SJD Shorts’.

Created especially for viewing on Facebook, Jeyasingh worked with filmmakers Terry Braun and Gary Tanner to craft new films from the raw footage of the original stage works, produced by her company, Shobana Jeyasingh Dance (SJD).

These works are bookended with a conversation between Jeyasingh and The Guardian dance writer, Sanjoy Roy, both on their respective staircases, discussing, dance, creativity, and curation.

Jeyasingh said: “Creating ‘SJD Shorts’ was an incredibly stimulating process. Together with Sanjoy Roy, I wanted to explore how dance could be enjoyed in the times we find we ourselves in and speak to us about issues that concern us now.

“We were interested in curation, duration and translation – and creating something new which communicated the essence of the original works.”

Some of these films have already appeared online, but there are a few more coming up which chime with the mood of the nation and makes you realise that Jeyasingh can be very prescient in her choice of subject matter for her shows.

Up tomorrow (July 20) is ‘Material Men Redux‘ (director Gary Tanner), a dance theatre piece that toured in 2017 and was created for two performers Sooraj Subramaniam and Shailesh Bahoran. It explores the dark realities of colonial migration and plantation labour.

She told acv: “Black Lives Matter (BLM) has brought the wider debate about Colonialism and the need to make visible the other side of the story of Empire.

“Many know about the legal abolishment of slavery but often not the answer to the question – what happened to the plantations after the slaves left? How was Britain and the other Empires able still to turn a profit?

‘Material Men Redux‘ looks at what happened next. It opens with the letter between two merchants arranging the transportation of workers from the Indian sub-continent to the West Indies.

Through archive footage and documents, it tells the story of poor farmers who were recruited from villages in India to travel in ships to countries they had never heard of with false promises.

The two dancers are the descendants of two such workers. They reclaim their memory and find a new way to belong in their new countries.”

This is followed by ‘Staging Schiele‘ (director Terry Braun) on August 3. The show toured in Autumn 2019 and is inspired by the works of the Austrian painter Egon Schiele who put the human body on visceral display. Four dancers inhabit his highly-charged world of colour, masterful lines and unusual perspectives.

At the post show Q&A session with Sanjoy Roy on stage at the Queen Elizabeth Hall, Southbank Centre, after the London premiere of ‘Staging Schiele‘ on on November 4 last year, Jeyasingh said: “What I found amazing about Schiele’s paintings especially his self-portraits – they don’t look anything like him, so they are not ‘self portrait’s’ where he was trying to capture what he looked like.

“They were really a record of his emotional states… and then just his treatment of the body. Obviously as a choreographer, I spend my working life looking at peoples’ bodies and trying to see if I can choreograph and find the narrative just using human body. ” (For more on this, please see the link below.)

Jeyasingh also said that while she was researching for her 2018 work, ‘Contagion’ about the Spanish Flu pandemic which killed over 50 million people worldwide at the end of First World War, in 1918, she discovered the condition also took the life of Schiele and his wife, Edith.

The short film of, and conversation about, ‘Contagion’ (director Terry Braun) show will take place on Monday, 17 August. The piece was commissioned as part of the 14-18 NOW arts programme for the First World War Centenary. It is looking at how the global flu pandemic and the War impacted people.

It features eight female dancers contorting and mutating as they explore both the resilience and the vulnerability of the human body.

The movement was inspired by the nature and spread of the flu virus as the ‘unseen enemy’ while the world was also involved in conventional warfare.

Earlier this year, Jeyasingh was awarded a CBE in the honours list and her company, Shobana Jeyasingh Dance, celebrated 30 years. She talked about her life and career in an acv piece called Changemakers – see the link below to read.

Some of the issues discussed in SJD SHORTS are further explored in the company’s podcast series, Surface Tension, available on SoundCloud https://soundcloud.com/user-284810499.

You can hear more on choreography and the human body and its narrative… https://surfacetension.libsyn.com/staging-schiele-bonus-episode

Privacy & Cookies: This site uses cookies. By continuing to use this website, you agree to their use.
To find out more, including how to control cookies, see here: Cookie Policy
← ‘The Sky is Pink’ – Director Shonali Bose’s powerful message with talent Priyanka Chopra, Farhan Akhtar and other talent talking about roles in film…(video)
‘Hustlers’ – Who was exploited? Jennifer Lopez and Constance Wu are terrific in this American crash tale… →