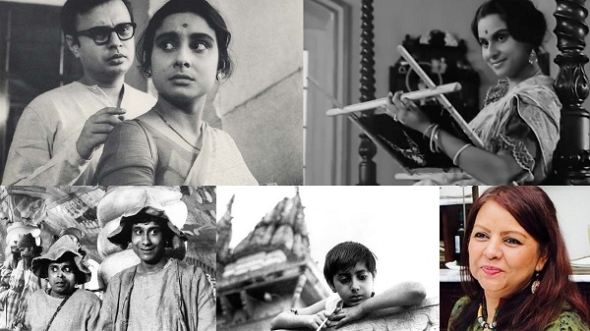 CELEBRATING Satyajit Ray’s birth centenary and 75 years of Indian Independence, this season of the filmmaker’s work will be the most comprehensive yet at the British Film Institute (BFI) on the Southbank in London.

Taking place between this Friday (July 1) and August 31, 38 of his films are set to screen, including a wider general release of one of his greatest feminist films, ‘The Big City’ (1963).

From a progressive literary Bengali family, Satyajit Ray was one of Indian cinema’s most treasured filmmakers. He had a career in advertising and was a fine artist before entering the world of film. His first feature, ‘Pather Panchali ’ (‘Song of the Little Road ’) remains his best-known. A colossus of world cinema, many directors – among them Martin Scorsese (‘The Irishman’) cite Ray as a major influence on their own work. Ray died in April 1992, aged 70.

In 1956, he was awarded the Bharat Ratna award, the highest civilian award in India, and he won 36 National Film Awards amongst many others.

www.asianculturevulture.com spoke to Season Programmer Sangeeta Datta about her choices of films for this season.

She told us why this year was different to previous Satyajit Ray retrospectives at the BFI Southbank.

“In the past, retrospectives have never been as comprehensive as this time, where we have all 38 of his films.

“I thought it was a good idea to bring another perspective and do it thematically.”

ACV looked at three films with Datta that are somewhat emblematic of Ray’s work and we review ‘The Big City’ (at the bottom of the page).

SHOWING on Saturday (July 2) and next Sunday (July 10) and with an extended run at the BFI, this classic is set in 1960s Calcutta (now referred to as Kolkata) and follows a middle-class housewife, Arati (Madhabi Mukherjee) as she takes a job as a door-to-door saleswoman. However, her husband, Subrata (Anil Chatterjee) becomes reluctant for her to continue when he loses his job and she becomes the sole breadwinner.

“The big city is really important in terms of raising views on women and the feminist angle,” said Datta. She continued: “It’s pretty historical. It’s about the juncture when women who were pretty much house bound stepped out to work.

“There are some very, very radical issues introduced in this film, and in many ways is one which would interest younger audiences”.

The Apu Trilogy: ‘Pather Panchali’, ‘The Unvanquished’ and ‘The World of Apu’ – World Classic back on the big screen

MADE in 1955, Datta explained in her own words that, “The Apu Trilogy trilogy tells the story of Apu from a young boy to an adult”

It is Ray’s most famous and best known work and as the trilogy progresses, we see Apu grow up and leave his small rural village in Bengal for Calcutta.

The first film in the trilogy, ‘Pather Panchali’ won eleven international prizes, including the Best Human Document awards at Cannes film festival in 1956.

Adapted from Bengali writer Bibhutibhushan Bandyopadhyay’s novel and with music from Pandit Ravi Shankar, Apu has become a cult figure and put Indian cinema unquestionably on the global map.

HOUSEWIFE Charulata (Madhabi Mukherjee) is the focus of the ‘Lonely Wife’ and is dissatisfied with her day-to-day chores, whilst her husband runs his progressive newspaper. However, that all changes when her husband’s cousin comes into their home and starts to flirt with her and encourage her creativity – and she begins to respond and writes poetry.

“The Lonely Wife’ is another very important classic, again with the focus on women.

“This is a film set earlier in the 19th century, and how an intelligent woman would probably find household chores not enough to engage her intellectually,” Datta explained.

Screenings will run throughout August (see link below)

CHILDREN’s film ‘The Adventures of Goopy and Bagha’ is an adaptation of Ray’s grandfather’s own fantasy story, where two village simpletons are given three boons by the King of Ghosts. Datta said it is an important film because, “it has a very strong anti-war message, which a lot of people would relate to in our current times”.

There will be screenings of the film on Sunday, July 17 and Saturday July 23.

There are also some talks during the festival this year, including Datta’s introductory talk as curator of the festival next Wednesday (July 6).

Sangeeta Datta is a well known writer/director, filmmaker and cultural commentator, and is director of non-profit arts company Baithak and Stormglass Productions, which is dedicated to creating cinema with international appeal. Her film ‘Life Goes On’ (2009) won awards at various film festivals and stars Sharmila Tagore and Om Puri.

‘The Big City’ Review – Changing mores as modernity breaks through

HAILED as one of Satyajit Ray’s best films, ‘The Big City’ did not disappoint. Screened as part of the BFI’s upcoming season surrounding the filmmaker’s repertoire, the film is an inversion of social norms and gender roles in 1960s Calcutta.

Housewife Arati (Madhabi Mukherjee) lives with her middle-class husband Subrata (Anil Chatterjee) and his family in Calcutta, as they struggle to make ends meet with Subrata’s meagre earnings from his bank job. He reluctantly allows Arati to start work as a door-to-door saleswoman but becomes increasingly jealous of her success.

Arati’s character development was subtle but effective. Her naïve and innocent representation in the first half of the film sees her come to grips with the world of work, almost as if she were a child on her first day at school, before her promotion leads her to become an independent woman standing up for what she believes in.

Subrata’s old fashioned father is so stuck in his ways he refuses to accept Arati’s decision to work, causing friction within the family. As a retired teacher, he urges his former students to give personal donations, thinking himself somehow entitled to a portion of their success.

It was interesting to see Subrata’s career begin to flail when the bank he works for goes bust, and Arati is left as the sole breadwinner for the family. Instead of being a supportive husband, it’s obvious Subrata’s pride has been damaged, and he selfishly encourages Arati to stop working.

He becomes a frustrating representation of male entitlement, but after Arati’s Anglo-Indian colleague (Vicky Redwood) is unfairly dismissed, she eventually quits her job on her own terms in protest.