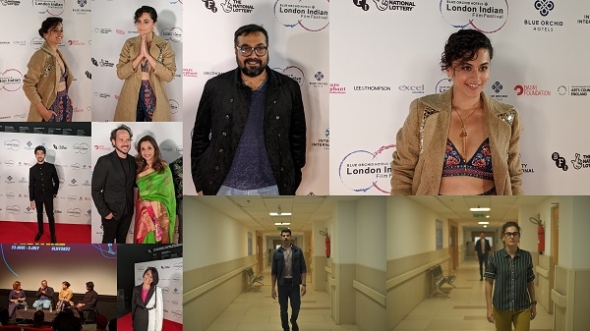 THERE were certainly surprises last night at the world premiere for the Indian film, ‘Dobaaraa‘, which opened the 13th London Indian Film Festival (LIFF) at the BFI Southbank in London.

Director Anurag Kashyap told us on the red carpet that the audience would be surprised – and indeed they were.

‘Dobaaraa’ is actually a love story and despite the slightly ominous and dark publicity imagery, it isn’t what we would term a typical Kashyap film.

It is still made with great skill and panache and Bollywood star – Taapsee Pannu who started her career in South Indian films, and more independent features, excels in the lead role.

She is at the centre of an unusual time travel story – ‘Dobaaraa’ is based on Spanish film called ‘Mirage’.

Kashyap totally ‘Indianises’ it – locating this story in a suburb of Pune, which is known in India, as a second tier city and distinct from the metros of Mumbai, Delhi, Chennai, Bengaluru, and Kolkata.

That gives the film its spookiness and remote feel – and so does the weather – an electrical storm and heavy rains upset everything.

We start in 1996 and a boy called Anay who loves ‘The Terminator’ – one evening as the storm takes hold, he sets up his video camcorder and starts to shoot a film for his absent dad. As he is filming, he becomes aware of strange-goings on next door between an uncle and his wife. He goes to investigate – with dreadful consequences as the rain and winds dominate.

Fast forward to 2021 and Taapsee Pannu’s character, Antara, a nurse, has moved into a new house with her husband and six-year-old daughter – and they discover an old camcorder.

Her husband sets it up and they see the boy Anay making the 1996 video… it is a little spooky as they discover the boy died not long after making the said video and reports stated that he witnessed a murder that night: the uncle had murdered his wife.

That uncle took his own life after confessing and being jailed, they learn a little later.

As the storm takes hold in 2021, awoken by the weather, Antara decides to watch the video again… and is able to warn Anay about what is to happen. He takes her advice and then…

This is where the fun starts.

Antara is now in a different reality – her life is completely different…but why and how?

You will have to see ‘Dobaaraa’ – and the love story at the heart of the film is only really revealed at the end.

In the post-screening Q&A, Kashyap talked about the difficulties of finding the location; Pannu about her career and working with Kashyap and Pavail Gulati – who is an investigating cop in the film – on the organised chaos that is a Kashyap shoot when no one really knows what is going on – except Kashyap himself.

Moderator Professor Rachel Dwyer reminded everyone that if Kashyap travelled back in time by 10 years, he would have been at the London Indian Film Festival premiere of how own ‘Gangs of Wasseypur’.

There were introductions from London Indian Film Festival (LIFF) director Cary Rajinder Sawhney and lead sponsor Tony Matharu of Blue Orchid Hotels which has taken over this year as the title sponsor of LIFF. He reiterated his support of the arts and said it enabled important issues to be raised.

Privacy & Cookies: This site uses cookies. By continuing to use this website, you agree to their use.
To find out more, including how to control cookies, see here: Cookie Policy
← ‘Jitney’ – go see this August Wilson play in its last week, it is simply too good to miss (review)
‘Chasing Hares’ – Connected worlds, Kolkata and London, and playwright Sonali Bhattacharyya keeping alive the flame of political desire through generations… (review) →