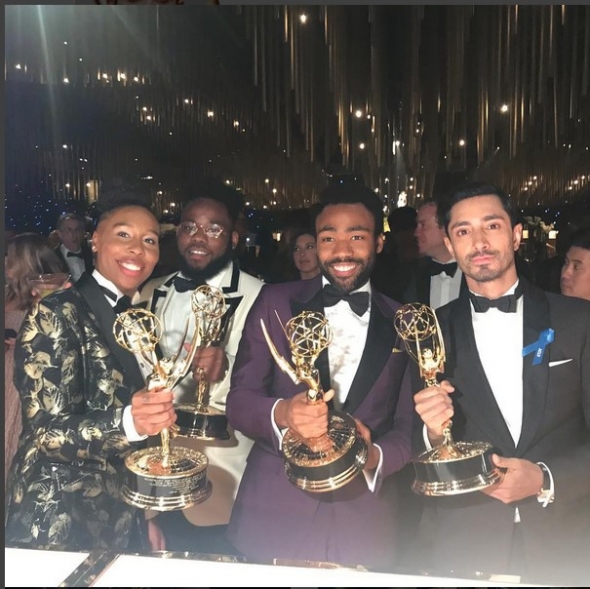 ACTOR Riz Ahmed created history last night by becoming the first Asian man to win an Emmy for his role in the mini one-off series, ‘The Night of’.

In the press room following his win, he said he was proud of being a Londoner and from the UK.

He also said one win might not change a great deal overnight, but over time, it might help and actually speed up the process of better representation and greater diversity and inclusion – not just in television but society as a whole.

Cognisant of the greater opportunities in the US for UK actors of colour, he also said that better representation would help to widen the kind of stories created and shown around the world.

“In terms of US and the UK, I’m really proud to be a Londoner.

“I’m really proud to be from the UK. I’m also really aware that actors of colour often have more opportunity in the US, but I think ultimately now we see that TV in particular is a global medium,” he said.

“People are streaming shows or watching them all around the world. Hopefully we’ll see a globalisation of our storytelling.”

Many the from the TV and film industry have saluted Ahmed’s historic win in the Limited Series Actor category.

Ahmed has not yet commented on his win on own his social media feeds (at 9.30am BST) but did post the picture above on his Instagram.

He also paid tribute to the late James Gandolfini who was the executive producer on ‘The Night of’ and was set to be cast in the lawyer role before his untimely death. The lawyer role was played by John Turturro who was also nominated in the same category.

‘The Night of’ was adapted from the BBC’s ‘Criminal Justice’ and features Ahmed as a young Pakistani American who borrows his Dad’s cab to go to a party, picks up a beautiful white American woman on the way, only to wake up the next morning and find her murdered alongside him in bed. He becomes the prime suspect and there begins his harrowing tale…

Another British Asian, Archie Panjabi won an Emmy in 2010 in the CBS drama, ‘The Good Wife’.

There was also an Emmy for US Aziz Ansari and his co-writer Lena Waithe for their comedy series, ‘Master of None’.

The Emmys are voted for by members of the Television Academy.

Last known picture of Riz Ahmed (@rizmc) before he was an Emmy winner. pic.twitter.com/sbkrz39JJ1

See ACV FB for Riz Ahmed’s own post when he was first nominated. It includes a video of the young Ahmed performing