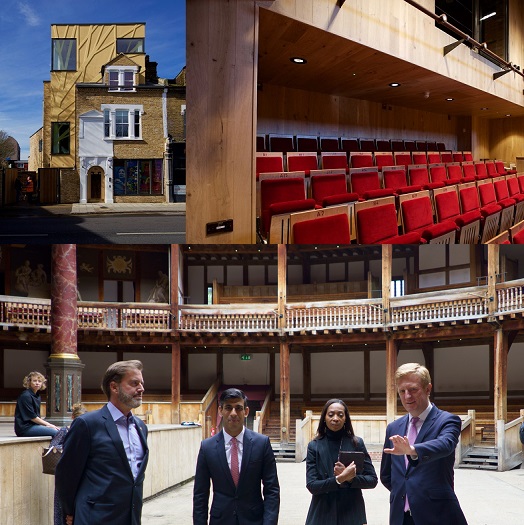 Broad support for Government aid scheme announced yesterday and gains in diversity must not be lost, some insist…

MUCH of Britain’s arts sector has breathed a heavy sigh of relief and broadly welcomed the Government’s £1.57 billion rescue package to cope with the impact of the coronavirus pandemic.

Many now will focus on the details of how to obtain these funds  – theatres and venues say they need urgent help or will simply go under and take thousands of jobs with them if financial assistance isn’t provided swiftly.

The package was announced yesterday (July 5) by the Department for Digital, Culture, Media & Sport (DCMS) and carries comments from Boris Johnson, prime minister, Rishi Sunak, chancellor of the exchequer, and Oliver Dowden, culture secretary (please see link below for full release). Dowden and Sunak were at Shakespeare’s Globe talking about the support the Government will provide and invoking the example of the Bard as not just a great writer but a creative who was also an investor and entrepreneur (see video below).

“Decisions on awards will be made working alongside expert independent figures from the sector including the Arts Council England and other specialist bodies such as Historic England, National Lottery Heritage Fund and the British Film Institute,” the Government release states.

Early reaction has been mostly positive – though some worry about how exactly the funds will be distributed.

Those working as freelances remain concerned as the bulk of the financial help on offer appears geared towards formal organisations and theatres and freelances attached to them.

Its creation was facilitated by a £500,000 donation from streaming platform Netflix and organisers behind this fund say they can provide assistance to freelances relatively quickly and painlessly – offering grants of a £1,000. Mendes urged streaming platform Netflix to invest its upsurge in fortunes following a near global lockdown in an article for the Financial Times last month.

While  both these funds will go some way towards alleviating hardship and need in theory – there is still doubt as to how theatres can re-open without social distancing measures being relaxed and venues generating much needed revenue themselves.

Dowden said it was still too early to put forward any date for re-opening of venues in the way that pubs and restaurants were legally permitted to open on Saturday (July 4) in England and follow new health and safety guidelines.

Jatinder Verma, the former artistic director of Tara Arts welcomed the Government’s aid announcement and said it augured well for the long-term future of arts in the UK.

“In living memory, I can’t think of an occasion when politicians appear to have heard the simple plea that arts are vital to the whole of the country and its economy.

“It’s extremely welcome and hopefully this will validate the sector as a whole for future governments,” said Verma, who was speaking to BBC Radio 5 Live this afternoon.

He also welcomed the Theatre Artists Fund and said it was important that the Government help reach out to small theatre outfits such as Tara and similar – and the freelances who worked for them.

“This is very welcome support from the Government for the cultural sector and it is actually going to filter down to freelances and also to small companies”, he suggested. “And within all of this, during the lockdown, a lot of us have been talking about how do we re-balance the arts, particularly in making efforts towards ending racial discrimination.

“In terms of BAME companies, by and large, they are at the small-scale and are touring companies. It’s the small that feeds the big.”

He called on the gatekeepers of these funds to look after small scale cultural producers and those individuals who made it possible. Perhaps the best example of this currently is Michaela Coel. Her BBC TV series. ‘I May Destroy You’ has been garnering rave reviews. Coel started out as a writer and performer in theatre and graduated to television later.

Verma added that it was important that bureaucracy was kept to a minimum and that funds reached individuals in need.

“One very simple example is what the Inland Revenue did when it launched a scheme early on during the lockdown for supporting small businesses and self-employed people – a very simple scheme –  all it required was for you to get online and they checked whether on your past records you were eligible or not and bingo – within six weeks you got a grant.”

He warned the system for accessing these funds should not resemble current government funding through Arts Council England or similar devolved bodies which involves a lengthy application process and some expertise in writing and understanding what makes a relevant submission.

Daniel York Loh, the former chair of Equity’s Race Committee, expressed gratitude earlier today but struck a more sceptical note after Dowden released the film of himself and the chancellor visiting Shakespeare’s Globe in London this afternoon.

He tweeted: “Does he ever meet people who don’t wear suits?”

She tweeted: “The UK arts rescue package is a huge relief – but the devil will be in the detail.”

Tarek Iskander, assistant director and CEO of Battersea Arts Centre, welcomed the Government’s move and and said it, “can only be good thing for the artists, freelancers, and dedicated staff that make up our wonderful performing arts”.

Before the announcement, Christine Payne, Equity General Secretary, said that talent had to be protected and warned, that “the first to leave the sector will be our BAME (Black, Asian Minority Ethnic), female, disabled and working-class talent, worsening the diversity of the sector”.

A view that Tracy Brabin, shadow minister for the cultural industries, also worried about since the package was announced.

“The gains we’ve made in creative industries over the last decade in Equality, Inclusion & Diversity must not be low-hanging fruit lost to the the crisis,” she tweeted yesterday.

Dowden has talked about open air performances being possible sooner than later and outlined that some social distancing in larger spaces may be viable.

However, he said that a lot of theatre infrastructure dated to Victorian times and it was still not safe for these venues to open.

There remain huge concerns as to whether theatres can re-open by December and put on traditional pantomimes. The financial implications could be catastrophic across the sector. Many make enough money during this time for a whole year of future work.

Jatinder Verma on BBC Radio 5Live with Nihal Arthanayake this afternoon (July 6) from around 12 minutes.
https://www.bbc.co.uk/sounds/play/live:bbc_radio_five_live