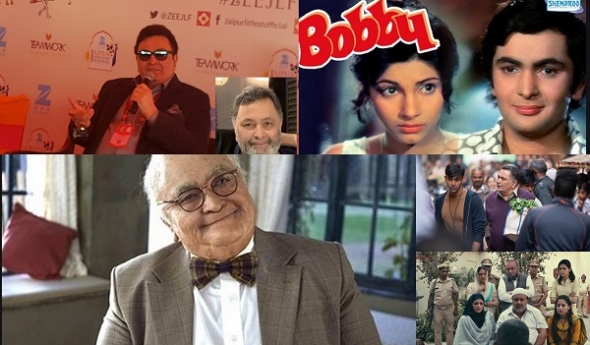 HE WAS THE ENTERTAINER – it seems utterly strange, and infinitely sad, to be using the past tense with Rishi Kapoor.

It was reported that right till the very end, he was in good spirits and joked and laughed with those caring for him in the Mumbai Hospital in which he passed away this morning from Leukaemia.

His death today does mark a watershed moment – his demise represents a clear sign that the baton is passing from one generation of Kapoors to the next.

Descended from two generations of legendary figures in the Indian film industry – grandfather Prithviraj and father Raj, both of whom starred, and the latter also made films – ‘Chintu’ as he was affectionately known, wrote himself into the history books and his career had an admirable shape-shifting quality to it. It is estimated he appeared in some 90 films – a good few will are unlikely to ever be forgotten.

Rishi Kapoor made his name in the 1970s as an evergreen romantic hero, funny, cheery and utterly at ease with himself. He could sing, he could dance, he oozed charm and he looked damn fine on the silver screen.

In a film such as ‘Bobby’ (1973) which had a social edge to it – marrying across class and religious lines for love – he was the archetypal Bollywood romantic hero – good-looking, fair, passionate and headstrong. One of the songs from the film, ‘Main Sheyar To Nahin‘ became an instant classic and a good Bollywood song in those days could make a star, practically overnight. In the BBC 10pm news they played an excerpt from this track in the opening bulletin.

The film turned out to be a huge hit and was Rishi Kapoor’s first senior role (he had debuted three years earlier in his father’s magnum opus, ‘Mera Naam Joker’ as a child) and also made a star of another young actor at the time, his female lead, Dimple Kapadia.

More latterly when www.asiancultureuvlture.com came across him, he exhibited charm, charisma and grace. It was easy to see why he was such an iconic and loved figure – that was clear when attending the Jaipur Literature Festival (JLF) in 2017.

He had come to promote his autobiography – ‘Khullam Khulla’ (loosely translated as ‘speaking candidly’ – with Meena Iyer). Media access was restricted to an impromptu press conference on the terrace at Diggi Palace overlooking the main stage at the festival. There was huge excitement as he sat down to address the many cameras and journalists assembled.

My heart sank. I knew.

I watched for a little while and it was not much different in his festival session on the main lawn with British academic Dr Rachel Dwyer – they spoke in Hindi mostly (and as a Brit of South Indian heritage, only slow and simple Malayalam doesn’t test me).

But even in that short time there was some measure of the man and his effect on crowds – and the way they responded to him. At JLF, there were quite literally thousands who had come to see him and were clearly enthralled.

His autobiography by Bollywood standards was frank. He addressed the issue of nepotism, coming from a famous family as he did. He said while it may have been easier to get your first break in Indian cinema, there was no guarantee it would ensure a long and successful career or life. Bollywood is littered with the sons and daughters of the famous who didn’t make it despite trying – but we only see (and mostly) remember the ones who do.

Similarly, closer to home – there was a talk at the London School of Economics (in 2012 and before the existence of www.asianculturevulture.com) a couple of years before that and again the electricity his mere presence caused even among a young crowd was enough to remind you – you were in the presence of bona fide Bollywood star.

Kapoor came into closer focus too when I interviewed the British actor Nina Wadia (one of the gang of four behind ‘Goodness Gracious Me’) for a lifestyle magazine of which I was the editor at the time in 2007 – GG2Life.

Wadia had just finished filming ‘Namastey London’ and told me that the opportunity of playing Rishi Kapoor’s wife was a very big part of taking on her first Indian film role.

She wasn’t jumping to do another Bollywood film she admitted (then), but her respect and admiration for Kapoor still stands out some 13 years later and today she tweeted her sadness and paid tribute to a fellow actor who “treated her like gold”.

That first hit, ‘Bobby’ is widely regarded as a Bollywood classic and a must watch film that stands in the pantheon of great Indian films of the 1970s – as does ‘Amar Akbar Anthony’ (1977) where Kapoor is alongside the actor of the decade and the one legend who even he recognised as being a bigger star, Amitabh Bachchan.

Along with Vinod Khanna, another huge name at the time, the trio played brothers, separated at birth and then brought up as a Hindu (Khanna), Muslim (Kapoor) and Christian (Bachchan), respectively, but were eventually reunited by fate and unaffected by their religious differences. The film did spectacularly and spawned many imitations and several Indian language remakes.

Many would have been proud with just one movie of this stature – but Kapoor went onto to add to his lustre with ‘Karz’ (1980) – though at the time the film was received rather coolly. In time, it’s come to be regarded as another classic and Bollywood and other Indian language cinema has better understood its quality as a revenge drama with very strong music and aesthetic values.

In 1991, there was another seminal film in ‘Henna’ which was shot in Kashmir and was first started by his father Raj who died 1998 and then completed by Rishi’s elder brother, Randhir, much later.

It had a considerable degree of Pakistani input with actor Zeba Bakhtiyar and writer Haseena Moin – when relations were much less fraught than they are today. The film proved to be a big hit and was submitted as India’s entry to the Oscars that year but didn’t make it into the final shortlist.

While for much of his life, he was the epitome of the romantic hero, and played such roles with an easy natural flair, few could have seen the change that came in what was to be his last chapter.

He became a very fine character actor – deft and versatile in portraying Indian men of a certain vintage and often of a very particular disposition.

None more so than, perhaps, in ‘Kapoor & Sons’ (2016), where despite all the obvious younger talent on display – in Alia Bhatt, Siddharth Malhotra and Fawad Khan, (before the formal ban on Pakistani actors appearing in Indian films in 2019), Kapoor almost stole the limelight completely by playing a mischievous, but lovable and characteristically sentimental Indian 90-year-old rogue – for which he donned very heavy prosthetics.

In ‘Mulk’ (2018) too, he gave the role of a Muslim patriarch much gravitas and emotional weight, eliciting much audience sympathy and compassion.

In the same year, he was recast with Bachchan in ‘102 Not Out’ – a funny two-hander with Bachchan playing the centenarian father and Kapoor, the long-suffering 75-year-old son. It was a gem and a hit.

We might have got closer to him in October 2018 when ‘Rajma Chawal’ came to the London Film Festival (LFF). Excitedly, we gushed that he might well be coming – and we knew that many here could not wait…

Sadly, it was the beginning of the end. A few days after news that the film had been selected to appear at LFF, Kapoor tweeted that he was in New York for “routine treatment”. He ebulliently and typically dismissed talk of anything else.

They probably don’t make them like that any more. Rishi Kapoor. RIP.

He is survived by his wife Neetu Singh, son Ranbir and daughter Riddhima Kapoor Sahni.