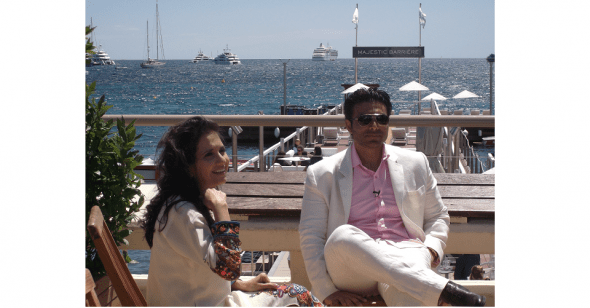 Cannes opening film, ‘Grace of Monaco’ was partly financed by a new production company that has its roots in India…

ACTOR AND now big-time film producer Uday Chopra spoke about his journey in Hollywood, just after walking the red carpet with Nicole Kidman the star of “Grace of Monaco”, which opened the 67th Cannes Film Festival on Wednesday evening.

Also on the specially convened panel in the India pavilion the next day (May 15) here was British screenwriter Arash Amel, now based in Los Angeles, and Yash Raj Film (YRF) Entertainment development and production head, Jonathan Reiman.

The three played down the reported bust-up with Harvey Weinstein whose company is distributing the film in the US.

“It’s between Olivier (Dahan, director) and Harvey, Olivier’s cut will be the American version,” he reassured the gathered panel audience.

A Bollywood star, he explained his Hollywood journey and his desire to be pulling the strings to make films, rather than appear in them.

It was a huge coup for YRF Entertainment to be awarded the opening gala screening which was enthusiastically received by the Cannes crowd but made less of an impression with the critics.

Chopra speaking to www.asianculturevulture.com and Eastern Eye’s Amit Roy he was sanguine about the mixed press reaction.

Nevertheless, Chopra expressed his huge excitement and sense of achievement walking perhaps the most famous film red carpet of them all, alongside established Hollywood icon, Cannes veteran and star of his production, Nicole Kidman.

He confirmed that “Grace of Monaco” would be released in the UK in early June and mid-June in India.

He said YRF in India would try to screen the film in about double the number of movie theatres a normal Hollywood movie would get.

In India, YRF is responsible for scores of films and is a big Bollywood player, making the hugely successful Dhoom franchise, which is currently in its third instalment.

Chopra said there was some hope that Kidman would visit India to help promote the film.

“I have spoken to her about it. There’s a chance, we have to look at dates,” he revealed.

He said he loved the script by Iranian-origin Amel, who moved from London to LA to further his screenwriting career.

“It’s all about family and about a marriage and a woman whose life changes when she gets married. A lot of women in India change when they get married and feel they are performing a different role,” said Chopra, responding to the question of what drew him to the script.

Amel in the panel discussion was more explicit about his own inspiration, saying it was the idea of woman and a film star trying to become a princess that first fired his writing instincts.

He said: “I had the idea whenever Will and Kate got married. I thought Kate was dressed like Diana and I thought Diana was very influenced by Grace Kelly.

“I did nine months of research and found all kinds of things in the archive material. Her marriage (to Prince Rainier of Monaco) was a movie in itself. MGM supplied the dress.”

The film is introduced as a fictional account based on real events and is very similar in style and tone to Hollywood films of the 1950s and 1960s.

Amel continued: “There was a lot of material up to 1962, then everything went grey. It was turning point (six years into their marriage).

“She was no longer Grace Kelly and not yet Princess Grace. It was all about a marriage. She lost her sense of identity.”

He described the process of his speculative script being produced and premiered at Cannes as “surreal” and like “a fairy tale”. Prior to this production, he has only one other film which made it to the screen, “The Expatriate/Erased”“, with Aaron Eckhart.

Amel wrote it on spec and it was picked up by French-run company Stone Angels (in LA) before Chopra and YRF became involved.

“I loved it,” said Chopra. In a more private discussion, he said the film appealed because it was all about family and was a portrait of a marriage that people could relate to – especially he felt in India, where it might resonate with a lot of women who tend to lose a lot of themselves as they play a subservient role to their new husbands.

Quizzed by Patrick Frater, Asia editor of film trade magazine Variety, Chopra disclosed how his journey in Hollywood in making “Grace of Monaco“.

He suggested making films in India was a little too easy.

“There is nothing I could not possibly do in India with the backing of a large company (parent India company, YRF) to support me in whatever it is I want to do. This is the larger challenge.”

He said he knew so little about the Hollywood system, he simply enrolled on a production course at UCLA and “lived out of a hotel for three months”, until he met Reiman and began to understand a bit more about how to go about things.

When Frater said YRF in LA resembled a “large boutique” studio in comparison to others, Chopra agreed. “A really large boutique,” he declared.

“I want to explore new ground, like captain Kirk,” he quipped.

He said the plan was to build YRF’s presence in LA.

Reiman elaborated the differences between YRF and other Indian production houses which also have LA/Hollywood tie-ups.

“We are a fully owned subsidiary of YRF Entertainment (India). There are not many political barriers and creatively we are very different (to the other studios in Hollywood), we buy our own projects and are totally separate (from India YRF).

“We don’t have any shareholders and so there aren’t any exact requirements. We can make one movie or three if Uday finds things he is passionate about.”

In other words, they were more directed by the appeal of projects, rather than a number of productions every year.

Chopra said that in contrast to other Hollywood studios, YRF in LA stayed close to the whole production of the movie and the creative process.

“We’re filmmakers,” he said perhaps inadvertently or unconsciously criticising the ‘accountants’ or ‘suits’ who famously hold the power to make and break many Hollywood movies.

Chopra said he is working with Amel on a new project about a “torrid affair” between Ingrid Bergman and the famous wartime photographer Robert Capa, based on a book called “Seducing Ingrid Bergman”.

Chopra also touched on “Titli”, which is also YRF produced film (in and from India) and showing in the Cannes Un Certain Regard section.

He argued that it was perfectly possible for a studio like his to do both types of films – ‘Titli’ and ‘Grace’. The Indian production is not a Bollywood movie and has no song or dance sequences.

“If we think the script is phenomenal we would like to support it. It (‘Titli’) is amazing cinema and we want to do it – why can’t we do both?

“At heart we are filmmakers and creative people. We’re not just looking at the bottom line – otherwise films like ‘Titli’ would not get made.”

Chopra also told Frater that while the popularity of Hollywood and western movies was rising, it was not as strong as in China, simply because Indians loved their own films far too much.

He said, “We’re cool,” stating subtly that Indians delighted in their own cinema and were no longer embarrassed by it.

Frater summed up the panel discussion: “We should end on that –the script is King and we’re cool.”