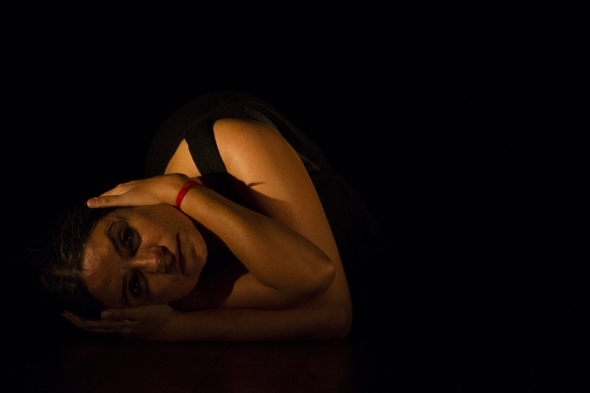 CHAI. It lies at the heart of so many people’s lifestyles; acting as a healer as much as it is perceived as a refreshment.

Chai is even thought to possess medicinal properties, so it’s no wonder millions of people worldwide rely upon a daily dose.

While the numbers of drinkers who turn to chai in their hour of need is infinite, each individual has their own story about their relationship to the leaves, and it’s these personal tales of tea that ‘Notes on Chai’ (‘NOC’) draws upon.

A monologue and sound based performance, devised, performed and directed by Jyoti Dogra, ‘NOC’ is an original, conversation led piece that consists of snippets of speech, interwoven with experimental vocal sounds inspired by Tibetan chanting techniques – sound a bit strange? It is.

Showing as part of The Alchemy Festival (which ended yesterday) at London’s Southbank inside one of their smaller rooms reserved for intimate shows, the 100-minute one woman performance was an intense and at times eerie experience, interspersed with light-hearted anecdotes. These were told from the point of view of incredibly captivating characters, who despite only having a few minutes of stage time before Jyoti transformed into the next persona, had instant impact; a quality, which is rare to achieve in short films and short stories, yet here, was delivered with such precision.

Opening with a tale of a woman who is getting increasingly frustrated awaiting an email reply to come in, her inner voice instructing her to make a cup of tea goes furiously around her head while her stress levels heighten as she awaits the ping in her inbox.

Other touching characters include a newly married woman who enjoys a quiet brew on her balcony before her husband wakes up and an older woman who insists that chai should only be made with milk and never water.

Performed in a pitch black room with just the glow of spotlights centering on each of Jyoti’s characters, it was easy to be drawn into each tale without distraction and it was this same darkness that heightened the intensity.

During the transformation time between each character Jyoti used rich sounds, vocals and chanting, much of which had a strangeness, and combined them with movement sequences, so at times she was flipping around on the floor and at others, standing stationery apart from the tick tock clock movements of her hands.

Jyoti, the powerhouse behind the production, deserves endless awards for this show.

Every aspect of her performance was powerful, she fully embodied the spirit of all her characters and to add amusement to the arrangement, she regularly slipped into herself as an actor, talking to the audience about how strange the show is. She then effortlessly became the next chai-obsessed persona with ease.

Showing the breadth of talent and imagination that is evident in the programming of the Alchemy festival this was one of the highlights, a ‘you had to be there’ show that left viewers in awe as the lights went up.

Privacy & Cookies: This site uses cookies. By continuing to use this website, you agree to their use.
To find out more, including how to control cookies, see here: Cookie Policy
← Shobana Jeyasingh awarded a CBE – crowning 30 years in dance; other arts & media New Year’s honours recipients – Nadiya Hussain, Nishma Gosrani and Jasvir Kaur Rababan
Bhumi Pednekar – Bollywood star telling it as it is and shifting the dial on how Indian movie stars think and behave…(and Bhumi Macao gallery pictures) →