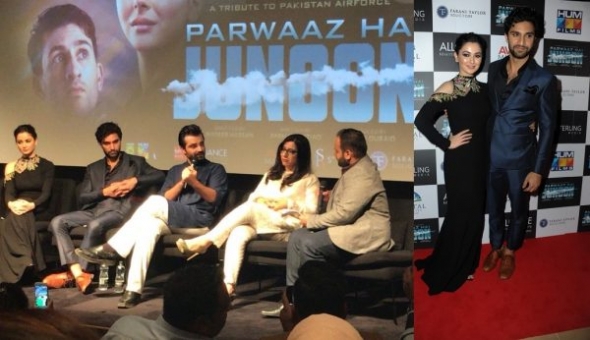 Multi-genre film gets starry London launch – acv was there to see the film, meet the stars and hear the post-screening Q&A…

A LITTLE bit about the film first.

When Nadir gets engaged Hamza meets the gorgeous Sania (a relative newcomer to film), Hania Aamir (also spelt, Amir confusingly!), and the two begin to enjoy a romance.

Alongside this we see four cadets join the Pakistan Air Force to go through the gruelling training to see if they have what it takes to become a top gun!

This is the basic premise of director, Haseeb Hassan’s new film, ‘Parwaaz Hai Junoon’ (‘Soaring is a passion’/‘Crazy for flying’), scripted by Farhat Ishtiaq, which had its premiere in London, and www.asianculturevulture.com was amongst the audience.

The film’s star, Hamza Ali Abbasi, who was persuaded back to the big screen after a long gap – revealed that he came from a Pakistani army background and wanted to show that “soldiers, whether air force, navy or military, are human beings like us, they have family, friends, and people who grieve after them”.

He explained that too often in South Asian films – be they from India or Pakistan – soldiers were depicted as machines without any humanity and this film aimed to “give their humanity back”.

Hania Aamir said she signed the film when she was just 19 – and she gives a fine performance as the young air cadet, Sania, who is trying to overcome her fear of flying.

“I am so honoured to present Pakistan’s Air Force in such a human way,” she said in the post screening Q&A at London’s The May Fair Hotel.

One minute you see the cadets relaxed and then suddenly a siren goes off and they’ve gone to save the country.

Ahad Raza Mir, who plays sulky cadet ‘Saad’, who grew up in Canada, explained he felt it was his “civic duty” to return to Pakistan and “change it for the better”.

Ali Abbasi urged the audience to encourage their white friends to see the film because, he explains there seems to be a lot of misconceptions in their minds about what Pakistan is like.

One journalist even asked him if they were any female combat fighter pilots in Pakistan!

Abbasi then reminded the audience of the Flying Officer Maryam Mukhtar, the first female ‘shaheed’ (martyr) of Pakistan Air force, who perished on 24 Nov 2015 when her plane crashed while on training.

“Please tell your white (‘gora’) friends to watch it – this is not exaggeration we’ve not put in Hania’s character to make it look glamorous – it’s true!”

www.asianculturevulture.com particularly enjoyed the sensitive performance by Sikander Vincent Khan, as the academy cook’s son, Rashid Minhas from Waziristan who has to overcome a lot of challenges to earn his wings!

Slick film, fine performances **** (out of five) for its depiction of patriotism and valour.

Privacy & Cookies: This site uses cookies. By continuing to use this website, you agree to their use.
To find out more, including how to control cookies, see here: Cookie Policy
← International Film Festival of India (IFFI): Bollywood glamour and glitz helps to get 49th edition under way as Akshay Kumar attends
Alyque Padamsee: A personal appreciation and the UK connection for a man of theatre, advertising and film (obituary) →