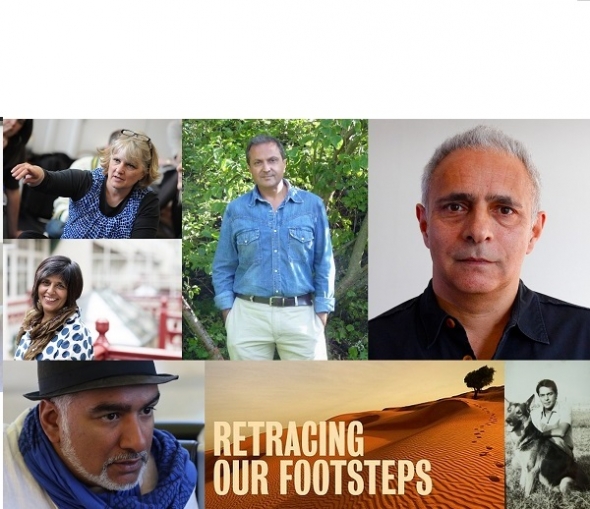 This year I will be marking 40 years of working in the theatre sector from my beginning as an actor, then undertaking PR and marketing, and bringing culturally diverse audiences to the theatre. I feel like a ‘living archive’ myself (!) but there is a paucity of knowledge about the cultural history of the Asian community in Britain.

Partap Sharma ‘A Touch of Brightness’

‘Retracing Our Footsteps’ is my attempt to begin a conversation around an effort to create a South/British Asian theatre archive of work (i.e. work from this community that has been produced or performed in the UK) that offers a window into the society of its time, but remains remarkably prescient even today.

The idea of the project came from the realisation that 2017 marked the 50th anniversary of a play called, ‘A Touch of Brightness’ by Indian writer, Partap Sharma, and not many people in the British Asian artistic community (let alone a wider fraternity of artists and audiences) had any knowledge of its existence.

So together with my sister, Sudha Bhuchar – who now runs Bhuchar Boulevard – we approached the Royal Court to see if we could mark this anniversary and thus the project was born.

‘A Touch of Brightness’ was the first ‘Indian’ play ever put on by the English Stage Company and amongst the original cast were three iconic figures – Roshan Seth, Saaed Jaffrey and Zohra Segal (who would have all just been jobbing actors 50 years ago!).

The play was performed on March 5 1967 and was later adapted for radio and transmitted on the BBC ‘Third Programme’ in November of the same year with Judi Dench playing the main character of Rukhmini (a girl sold into prostitution) and the now, late maestro, Ravi Shankar having composed the music!

This play was originally due to be performed at the first Commonwealth Arts Festival in 1965 but was prevented from doing so, because of a campaign against the play.

Protestors felt that the themes of the play which ranged from child prostitution, street children and corruption was bad for the image of India and so the Indian government banned the play, as “it deals with matters which it is highly undesirable to show on the stage”. (The ban was lifted in 1972).

As an accidental pioneer, I often come across younger Asian people interested in a career in the arts, so it feels urgent to communicate this knowledge of works that have come before and to bring that awareness to wider theatre audiences.

‘Borderline’ was developed from research into the Asian community in Southall in the aftermath of the 1979 riots. It’s a snapshot of the Asian immigrant community trying to fit on or keep themselves separate – something that will resonate even now!

‘Borderline’ was performed at the Royal Court in 1981 and Rita Wolf (who played the main character of a teenager called ‘Amina’) sent me her thoughts on that experience: “We started work on ‘Borderline’ with the Joint Stock Theatre Group in early 1981. It was my professional theatre debut as a 20-year-old graduate of the Royal Court Youth Theatre (‘The Activists’) who occupied a space called The Garage (it was indeed an old garage behind the theatre) in the late 1970s and early 1980s.

“It was a play that came out of company research, the brief, like so much of Joint Stock’s work was – take a subject (in this case the lives of the sub-continental immigrant community in England) – research and present our findings to one another in the rehearsal room and then take a break while the playwright – in our case Hanif Kureishi- writes a play over the summer for us to tour the country in The Fall (autumn), culminating in a run at The Royal Court.”

Amongst the original cast was also Vincent Ebrahim (now more familiar from ‘The Kumars at Number 42’) who then played the love interest of Amina called ‘Haroon’ – and he will be reading for the father now!

Meanwhile ‘Blood’ by Harwant Bains tackles the personal legacy of the Partition of India and the impact of the carnage on two young brothers, who arrive in the England of the 1960s, wanting to succeed.

In his programme note, Bains says that: “I can say that ‘Blood’ was in some measure born of the desire to open a dialogue with a previous generation; that is, those men and women who cut away their roots to journey across the world and build what they hoped might be a better life. My generation, the ‘Second generation’ as we are sometimes known, can never fully appreciate the courage that our mothers and fathers must have possessed to take the risks they did. They were adventurers of the first order, and we should not forget that.”

The original production featured many actors who are now household names, such as (the late) Paul Bhattacharjee, Meera Syal, Bhasker Patel, Kulvinder Ghir, Gordon Warnecke to name just a few!

The readings will be directed by contemporary directors, Kristine Landon-Smith, Kully Thiarai and Iqbal Khan who will bring a fresh perspective to these works and each night is followed by a panel discussion with authors and theatre makers.

With a mixture of humour, pathos, fear and longing, these play readings provide a unique opportunity for audiences to engage with our diverse stories and a less known British Asian theatre heritage. I hope this will accelerate the momentum for establishing an archive of works from this contingency of writers and also to encourage revivals of these productions!

Jatinder Verma, artistic director of Tara Arts, who has been a great supporter of this project says, “this event is a significant one, as it’s going to lay down the territory. I would say these plays are classics and will be points for discussion for emerging writers”.

Suman Bhuchar is a contributing editor to www.asianculturevulture.com

Friday, June 1 – ‘Blood’ (1989) by Harwant Bains and directed by Iqbal Khan
Panel discussion – Can we talk about it? Telling our story
Chaired by Sudha Bhuchar and panel includes Harwant Bains, Gurpreet Kaur Bhatti and Iqbal Khan.

Privacy & Cookies: This site uses cookies. By continuing to use this website, you agree to their use.
To find out more, including how to control cookies, see here: Cookie Policy
← Theatre bird bites – Autumn calling ‘East is East’; ‘10 Nights’; ‘Rice’; Kali Week on Home; NW Trilogy and ‘The Normal Heart’
‘Paka’ (‘River of Blood’): ‘A home-grown film that is being shown around the world’ (video, Toronto International Film Festival 2021) →