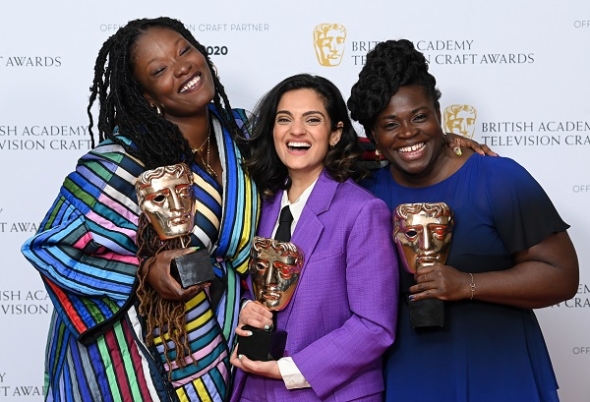 The creator of ‘We are Lady Parts’ wasn’t the only one to win for Channel 4 comedy last night, there were three wins in all – and in a first – a member of the acv team picked up a Bafta for his work as a creative on a BBC project…

IT WAS a quite brilliant night at the Bafta TV Craft Awards last night (April 24) for Nida Manzoor – the woman behind the hit TV comedy show, ‘We are Lady Parts’.

She revealed that other broadcasters had turned down the show – but not Channel 4.

Receiving her Writing – Comedy Bafta (British Academy of Film & Television Arts) TV Craft award, at the ceremony, she saluted Channel 4, as well as praising the team who made the show even more amazing than she had imagined. Manzoor also directs the six-episode show which first screened in May 2021.

She said: “Massive thanks to Channel 4, I didn’t go to film school or anything, as a team they really believed in me from the beginning.

“All the other broadcasters passed on ‘We are Lady Parts’, Channel 4 didn’t.”

The “exuberant comedy musical” as Channel 4 described it, charts the ups and downs of an all women Muslim punk band, called We are Lady Parts.

It won in three categories, scooping an individual writing award for Manzoor, while PC Williams won for Costume Design and Aisha Bywaters for casting a scripted comedy.

(You can watch their reactions to these awards in full below. The ceremony was at The Brewery in London).

Manzoor has written and directed for TV before and has just completed her first feature film with the company that produces ‘We are Lady Parts’ – Working Title. She first approached the company with her idea for ‘We are Lady Parts‘ and name checked the executives who helped to get her show onto network television.

Written by Manzoor, ‘Polite Society’ sees a stuntwoman attempting to wreck her “sister’s wedding in the name of freedom and sisterhood”. It has another strong cast of British Asian actors.

Channel 4 was also in the spotlight – albeit not named directly – when Bafta Chair Krishnendu Majumdar made his opening address.

He said the Academy cherished public service broadcasting. It seems very likely that Channel 4 will be privatised and while there may still be a commitment to public service broadcasting and some protection for diversity in the channel’s output, there remains huge uncertainty. Channel 4 did not comment at the time of going to press today. It was set up to widen the diversity of programming in the UK. It currently puts any money it makes into programming.

Majumdar said yesterday: “While we welcome and embrace evolution, we should also cherish public service broadcasting. It’s the bedrock of distinctiveness and independence of thought in this country.

“It’s the very fabric of our culture and values. It’s been said – to poison a nation, is to poison its stories, we cannot let that happen. It’s too precious and should be above politics, we cannot afford to lose it.”

Now all attention for Manzoor’s talented team will turn to the Baftas TV on Sunday, May 8 when ‘We are Lady Parts’ star Anjana Vasan who plays reluctant band member, Amina, vies for the Best Female Performance in a Comedy Programme.

*Michael Tsim, cinematographer and videographer was part of the team that won in the Titles and Graphic Identity category for its BBC promotional video, Tokyo 2020 last night. He is part of BBC Creative. Michael was our videographer at the Cannes Film Festival 2015 and 2017 and covered Toronto International Film Festival in 2019 as well and has been on individual assingments for acv. Well done Michael, sure there will be more Baftas! Michael told us he was thrilled. “I can’t quite believe it! It’s just fantastic to be recognised by Bafta and also thankful to have my creative partner in crime Rachel Miles and also a great group of brilliant creative minds to make the film together, a real team effort.”

Privacy & Cookies: This site uses cookies. By continuing to use this website, you agree to their use.
To find out more, including how to control cookies, see here: Cookie Policy
← ‘White Teeth’ (play) – Musical multi-cultural melting pot should touch hearts and minds (review)
Darbar – Mavin Khoo talks to acv about the Indian classical dance festival and see him working with bharatanatyam dancers with Renjith Babu and Neha Mondal Chakravarty →