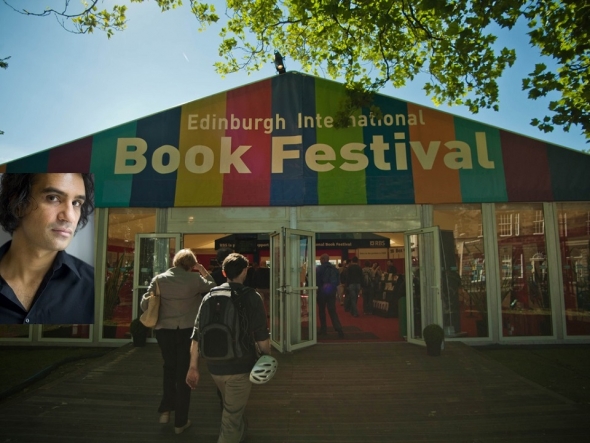 HIS WRITING is often described as beautiful, poetic and haunting.

Many more are likely to be charmed and seduced (if not already), when he appears at the Edinburgh International  Book Festival, which gets under way this month today (August 10).  Aslam talks on August 12 about his last novel.

Aslam took time out from his busy schedule to talk to www.asianculturevulture.com about ‘The Blind Man’s Garden’ (published in February of this year), the recent elections in Pakistan, and what he sees as the role of the writer-artist, his forthcoming work and what festivals do to him – don’t worry, you’ll be surprised and tickled!

But first… there’s no doubt that Aslam is a literary gem, a powerful and distinct interlocutor between the centuries old dialogue between East-West.

Underpinning all his books is perhaps the same impulse: to present the East in its true light, to open all our eyes to both the beauty and suffering that exists there – and not flinch.

He also allows us to better understand the intellectual forces at play and counter the easy and often misleading stereotypes that are pushed at us from all sides.

‘The Blind Man’s Garden’ is a novel set in a post 9/11 Afghanistan and at the heart of it, is a searing romance played out against the background of a country in turmoil and division.

It covers the historical period, from 9/11 through to the Arab Spring of 2010, a tumultuous period in the first decade of our new century and possibly one that is likely to define relations between East and West for the rest of it.

At its crudest levels and what makes fiction sometimes more powerful than any type of history or traditional journalistic account of significant events, is the drama between ordinary people, sometimes caught in trying circumstances.

“The starting point for ‘The Blind Man’s Garden’ is the war on terror, but ultimately it is an examination of what is to be human, how to love, how to get over disappointment, how to be a decent human being in extreme circumstances,” Aslam, 47, tells us.

For Aslam, the differing reactions from his own publishers to the manuscript in East and West was both revealing and instructive.

“Invariably, the response from the West was that ‘this is a dark book, a savage and brutal one’. In India and Pakistan, it was ‘this is a beautiful book, exquisite and lovely at the same time’. The same text was being looked at, but in a completely different way,” he revealed.

He said it wasn’t that people in India or Pakistan or other countries, which seem to have insurmountable issues, were blind to the problems around them.

“It wasn’t to say, we are not aware of our own darkness, but we refuse to be defined by it. We know things are bad.”

That is a crucial point.

Perhaps, Pakistan more than any other country at the present moment, battered as it is all from all sides, needs its artists to say and reiterate that,  over and over again and for the west to listen, to take notice and appreciate the complexities.

“What is the alternative?” Aslam points out bluntly. “If you live in a place like Pakistan where terrible things are happening every day, you just would not get out of bed in the morning.”

You have to carry the essence of hope, the courage to continue and appreciate that even life amidst the troubles can bring small but sweet consolations, he suggests.

“You have to concentrate on the beauty of a flower, the smile of a lover – focus on those things in order to fight the bad forces, you need some consolation.”

He describes himself as a ‘realistic optimist’ – the recent events in Egypt, where the army deposed an elected leader, and the spiralling violence in Pakistan, despite successful elections and the advent of a civilian administration,  he argues, should be seen in their proper historical contexts.

“It is an on-going process, you have to understand, you cannot have a country which has been under dictatorship for three/four/five decades and suddenly expect democracy to take hold or after just after one election. These things are imperfect, even in places like India, Britain and America, so the main thing is not to panic.

“We have no choice but to be optimistic.”

His novels also centre around characters trying to negotiate their own happiness and remain principled and decent, despite the temptations sometimes put their way.

This is Aslam’s optimism, his belief that good people will try to do good things and make a difference.

“If you were to say to me Pakistan is completely broken and fit for the rubbish bin, I would want to see that you had tried once to fix Pakistan and you failed, that you had tried 10 times, 100 times and failed, then okay, I think you may have the right to say that, but the fact of the matter is that the kind of person who has been trying all their lives to fix these sorts of broken countries, broken institutions and correct imperfect hierarchies of power, will never give up, they will say, maybe we didn’t try hard enough, let’s try one more time.”

This is perhaps beautifully encapsulated in ‘The Blind Man’s Garden’ when there is a pivotal exchange between the two lovers.

“It’s towards the end of the novel,” Aslam explains. “And the heroine says that, ‘I can say to myself that if you were here with me, I could cope’ and he says, ‘I wouldn’t have been to do anything’.

“She replies:  ‘You don’t understand, I am not saying you could have prevented the bad things, I am saying that with you next to me I would have coped’.”

In other words, while there is tendency and a certain preponderance to bash and sometimes belittle these developing nations with their issues and their problems, it may be better – though harder – to seek out, identify and acknowledge the humanity that binds us together.

His work emphasises the moral and honourable choices people make.

“There are people who are thrown into extreme circumstances  – and then the world is saying to them, do the corrupt thing, do the bad thing and we will let you go, but again and again, the character says, ‘no, I will be destroyed but I will not do the wrong thing, I will do what I know is the right thing’.”

He is adamant that these people do exist.

“Everything I write is true. I always get this comment – they’re probably people like that – no, I KNOW people like that in India and Pakistan. There are people who go out of their house every morning, and don’t know whether they’re coming back, but they still go out and they are honourable people and those are the kinds of people I take nourishment from.”

Aslam has had three books before ‘The Blind Man’s Garden’ published. ‘Season of the Rainbirds’ (Betty Trask award), Maps for Lost Lovers’ and ‘The Wasted Vigil’, have all steadily accumulated readers and admirers since his debut in 2005.

His next work which he is close to finishing and thinks may be published in 2015 will be centred around the subject of the blasphemy laws in Pakistan. It’s a controversial subject in the land of his birth.

“Everything is controversial, but as a novelist, I feel it is my duty to channel my distress and my sense of injustice onto the page – there is nothing else I can do. As an artist, that is the only thing I can do.”

He moved to Britain at the age of 14, along with his family, who were fleeing the military dictatorship of General Mohammad Zia-ul-Haq (1977), and settled in the north of England, though Aslam now lives in London.

He has been described as ‘reclusive’ and when he writes he devotes himself almost manically to the task at hand, writing and thinking for upwards of 12 hours every day on his work and not going out or socialising.

It takes its toll, but it is also what in some ways delights him when he makes public appearances, such as at literary festivals.

“But with novelists we spend years doing something and there is no response, and sometimes I think I don’t exist, but when the book is published and I go to festivals and I meet people and they say they liked the book or that character, I am frequently startled, then they can see me and I can tell myself, I exist!”