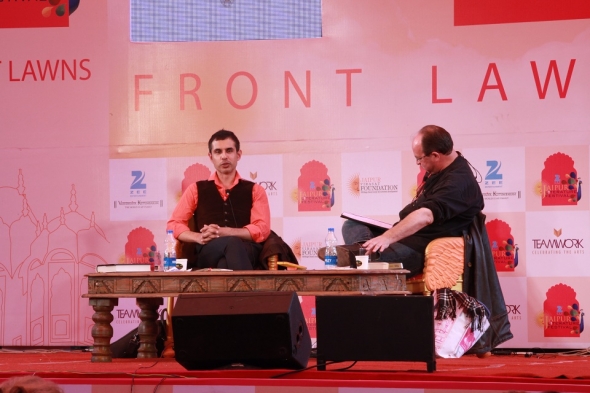 A NEW book by a British Asian writer has been hailed as one of the non-fiction works about India to look out for this year.

Dalrymple, whose own “City of Djinns” about the capital was widely acclaimed, made the declaration on the fourth day of the Jaipur Literature Festival (yesterday).

He said: “This is going to be one of the big books of non-fiction about India this year.”

“Capital” essentially charts the enormous changes the city has undergone over the last ten years.

Both Dalrymple and Dasgupta agreed the city had a genuine space and respect for artists and that there was now a booming arts scene and as migrants (Dalrymple also lives in Delhi) they had been if not exactly welcomed, then more than accepted.

Dasgupta moved to Delhi to be with his partner of the time but fell in love with the city and it is where his writing career has flourished, writing two books. He was born in England to an Indian father and an English mother.

“Tokyo Cancelled” is a series of short stories, while “Solo“, which takes place largely in Bulgaria, won the Commonwealth Book Prize in 2010.

“I had time to lift my head from the sand,” said Dasgupta. “And I started to think about the city that had become my home and how it had changed enormously, physically and culturally.”

“Capital” is made up of a series of interviews with people who represent some level of change.

He agreed that Delhi was a city of trauma, whether that was to do with Partition and its bloody consequences or the forced destruction of poor neighbourhoods to make way for shopping malls or facilities for the 2010 Commonwealth Games.

The once grand Imperial capital of India has from appearances given way to something altogether more brash and vulgar, with people it seems who had little taste or refinement at the very vanguard of this change.

Dasgupta said it was easy to dismiss this new elite as it was popular to do so and in that respect India was not much different to other places undergoing similar phenomena.

“When you say ‘new rich’ you produce a smirk – it’s about crass aesthetic tastes and inappropriate social etiquettes but this is the disdain for the new rich at all times and in all places.”

He said he reserved judgement and was often surprised by what he found and that many of his subjects were more cultured and refined than the popular imagination deigned.

Prompted by Dalrymple, Dasgupta did say one interviewee was “violently misogynistic” and his subject had seen it as an opportunity to get even with all the prostitutes he felt had wronged him.

One of the themes of the book is the changing nature of gender relations, Dasgupta mused.

Dasgupta said there was a lot of talk about the idea of manhood being challenged and that some men felt threatened and confused.

“There is a low-level war against women and it’s to punish them for being independent, professionally, sexually, and there is a backlash against mobility,” said Dasgupta.

Capital is set to be released in London later this year.

*Later in the day, festivalgoers were treated to journalist, academic and activist, Shereen El Feki talking about her book, “Sex and The Citadel”, which is an examination of sexual relations in the Arab world.

In conversation with US journalist Jonathan Shainin, El Feki said the Arab world was not always as conservative as it was now.

In the 18th and 19th centuries there was a far greater degree of sexual freedom than there was in the West.

But a greater level of political repression and increasing growth of religious conservatism had seen many freedoms evaporate in the 20th century and beyond.

Her book examines pioneering work in the Arab world which seeks to challenge repression and sexual orthodoxy.

In the Sex and The Citadel, she argues change will come but it will be through evolution, not revolution.

Her book has caused a storm in many of the countries it examines.

Early on, the daughter of an Egyptian father and a Welsh mother, writes: “If you really want to know a people, start by looking inside their bedrooms.”

*Earlier, the festival also heard from Adrian Levy, co-author with Cathy Scott Clark, of “The Siege”, which looks at the planning and execution of the Mumbai attacks. An interview with Clark appears in the book archive section.