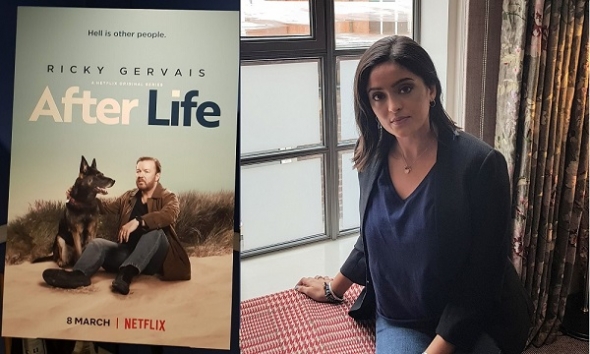 The ‘Some Girls’ TV star talks about characters arcs, working with a master and just how easy it felt…

MANY critics who have already seen ‘After Life’, a new show, written and starring Ricky Gervais, say it is his best work since ‘The Office’ and has echoes of it.

That is also what Mandeep Dhillon, who has a leading part in it, thinks too. The six-part 30-minute or so long episodes drop on Netflix tomorrow (March 8).

Dhillon told www.asianculturevulture.com: “I think it’s Ricky’s best work to date, for sure and I am very happy to be part of it.

“It feels like something big and people’s reactions to it so far have been very good.”

In ‘After Life’ Gervais reprises the main role of ‘Tony’ who is in a lot of emotional pain – his wife of some years has just died of cancer and has made these videos to help him overcome his very significant and personal loss.

We see Tony watch a video of Lisa (Kerry Godliman) smiling, laughing and joking – even though she is in hospital, has a recognisably drab ward gown and head covering on, and encourages him to get on with his life after her.

Tony is a desperate man though, mired in grief and self-pity – and on more than one occasion tells anyone and everyone, he would rather kill himself – but the dog would die too, if there is no one is around to feed him.

The scenes of him feeding himself, let alone his faithful pooch, are too hilarious and bizarre to cite here – you need to see them for yourself.

Tony is a great Gervais’ creation – a misanthrope who can’t help but be cynical and do everyone down.

It’s very funny and the fact that Tony works as a journalist on a local paper is simply grist to his mill of cynicism and disillusionment with life and the world in general (there are some sharp and caustic social observations).

Dhillon’s character is quite the contrast – she’s the new recruit on the ‘Tambury Gazette’ and meets Tony on her first day at the paper.

There’s no ethnic component as such – she’s just another character that makes up Tony’s rather motley and slightly eccentric crew at work (‘Sandy’, played by Dhillon, is the most normal, probably).

Now, you might think that old Tony wants to disabuse Sandy of her enthusiasm and naivety.

But no, it’s obvious, he is rather more tolerant of Sandy than anyone else – at least in the office.

“He is never cynical with me,” explained Dhillon. “He’s just in a lot of pain and he’s hurting. He isn’t directly rude to me, like he is with the other characters. We become friends, I do go to the pub with him and take him out shopping.”

Dhillon isn’t the love interest, if that is what you are mistakenly thinking – for a start, Sandy is too young for Tony (he’s not that daft or idiotic) and the love interest is actually played by his great foil from ‘Extras’, Ashley Jensen – who plays a nurse tending to Tony’s father in an old people’s home.

What is beautiful about ‘After Life’ is that it is not only funny, but poignant and very relatable.

And something that has a clear trajectory for its characters.

“I think all the characters have a bit of an arc, it’s her first taste of journalism, ” Dhillon recounted. “Ricky always knew where he was going with it.”

“He just called me up and said I’ve written this role for you, do you want to do it?”

She credits Gervais with making it look easy and effortless – the characters are all very believable and the pathos is so finely pitched you can’t miss it – and that proves the actors have done their bit with great skill too.

“It’s the way Ricky works, it’s a great environment and it doesn’t feel like work, ultimately the process is very enjoyable and a natural setting to be in and it was a very safe environment to explore (as an actor),” revealed Dhillon.

Next up for her are two writing projects.

“One is a comedy drama and the other is pure comedy,” she told acv.

“Haven’t I just!” she laughed.

‘After Life’ is on Netflix from Friday March 8th http://www.netflix.com/afterlife

Privacy & Cookies: This site uses cookies. By continuing to use this website, you agree to their use.
To find out more, including how to control cookies, see here: Cookie Policy
← London Eye lit up for Diwali for first time – Meera Syal and India High Commissioner among guests to laud spirit of togetherness…
‘Bayadère – The Ninth Life’: Shobana Jeyasingh’s reworking of ballet classic is powerful and enjoyable culture marker (review) →