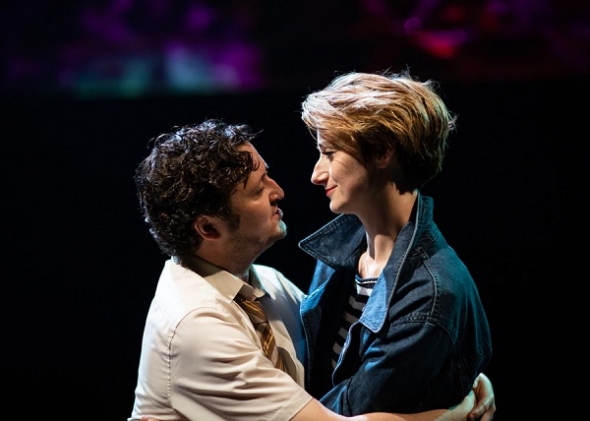 POLITICS is in tremendous flux and shrouded in some secrecy and apprehension – no one knows quite what will happen next, many leaders are ambiguous and even shady about their next step.

No one doubts that change – possibly even a revolution – is around the corner but these same leaders are loathed to show their hand or their true desires.

Amidst this tumult, an unassuming man falls in love with a much admired and popular woman, but his loyalties quickly become divided and tested.

This isn’t ‘House of Cards’, or even ‘Game of Thrones’, though it has some of its same themes running through its almost exploding veins: power, ambition, loyalty, love, winners and losers.

Closer to the graphic novel and the world of Gotham City and ‘Batman & Robin’, the Royal Shakespeare Company’s production of ‘Venice Preserved’ is a thrilling theatre experience.

An imaginative and expansive set, some unforgettable characters and a real vision of much a darker and murkier world make it a real triumph for director, Prasanna Puwanarajah. The acting is strong and a diverse cast make it closer and more real than it might seem on paper.

The play was originally written in the 1680s by Thomas Otway, and is very much a Restoration* drama of intrigue, intense politicking, romance, violence and skulduggery. The plot isn’t always easy to follow but the atmosphere and tension can carry anyone along.

Puwanarajah told www.asianculturevulture.com his modern version – on at the Swan Theatre at the RSC in Stratford Upon Avon, until September 7 – drills deep into human motivation and beliefs.

“For me, it’s a play about love and hope, and the decisions people make at the edge of political upheaval and how those decisions are not always good decisions, and how we are not always heroes or villains, we are just people trying to survive,” he told acv.

“In the operatic scale of the characters and their psychology, there’s a very recognisable thread, of people in the period up to the revolution (in the play), making horrendous decisions – that they might look back upon and think, god, why have I done that? Because those were the only decisions available to them at the time at that moment.”

Topical, urgent, and powerful ‘Venice Preserved’ puts us all into a Venice that is wracked with corruption, double-dealing, hypocrisy and venal politicians whose own interests are dressed up to address some fictious common good.

It’s very much a play about humans on the edge, and trying to find a way out of a terrible political crisis.

Puwanarajah said few of us (in the West) have ever been in that extreme position – where our very existence is threatened by political decisions. The notion of survival is an important one.

“We’re really peering into a window about how to survive – the decision-making of people escaping warfare and places of political oppression from our relatively privileged position can feel alien and strange,” he explained.

The director’s Sri Lankan Tamil heritage probably gave him some greater insight into why some of the characters in ‘Venice Preserved’ behave as they do – desperate people often to do desperate things (as the tragic case of Oscar Alberto Martínez Ramírez and his near two-year-old daughter, Valeria, illustrates – father and daughter, hand wrapped around him, died together when trying to cross the Rio Grande, from Mexico to the US as the tide caught them and they drowned).

“If we want to understand the motivations of the characters in the play, we have to put ourselves in the mind of a contemporary person in Damascus (Syria) or someone in Bucharest in the late 1980s (as the Nicolae Ceaușescu in regime in Romania collapsed).

Somewhat above the fray is Belvidera (Jodie Mcnee), the senator’s daughter whose relationship with Jaffeir (Michael Grady-Hall) threatens much (unknowingly); her steeliness and sincerity stand out.

“They fundamentally lead me to the conclusion that she is the force of good and light and has a superhero vibe about her,” revealed Puwanarajah.

Planning for an RSC production often begins some years in advance and Puwanarajah first had the idea of setting it in a more contemporary world some eight years ago.

“Speaking very personally, I think there has to be a very good reason to set it in the period (in which it was written), it’s very easy for audiences to hold these sorts of plays at a dispassionate distance, if everyone was wearing what you might think of as old world clothes – you’re sort of invited to say, this is not our world.”

Away from this production, Puwanarajah also acts and can be next seen in ‘Defending the Guilty’, a new comedy drama about barristers, all set for an August transmission on BBC2.

His career as an actor first developed as a side-acvity and a passion – alongside his day job of being a hospital doctor.

It grew into something more as he realised that a career in medicine was not really what he wanted. He’d done drama when he was younger and as a member of the National Youth Theatre, he knew he enjoyed treading the boards.

Ironically, when he had time off from stints as a doctor in the Midlands, he would take himself off to Stratford to watch RSC productions.

A writer too, he is working alongside Jed Mercurio (‘Bodyguard’, ‘Line of Duty), on a new TV project. The two former medics got to know each other on a Sky medical drama (2015), ‘Critical’, Mercurio writing, and Puwanarajah acting. He is also set to direct his first feature film soon.

For those aspiring to break into the industry, he told acv this: “There are local theatre groups you can join and youth theatre groups in the major cities.

“In any professional space, it’s about working out how much joy and life and reveal it will give you, and also managing the hardships (that can come with it) – all jobs have their moments of wonder and all jobs have horrible things about them, you have to find what feels right…”

*Restoration refers to the time when the monarchy was restored in England in 1660 following the years under the rule of Cromwell, where plays, drama and entertainment were much looked down upon. The restoration of the monarchy saw a revival of the dramatic arts.

Privacy & Cookies: This site uses cookies. By continuing to use this website, you agree to their use.
To find out more, including how to control cookies, see here: Cookie Policy
← ‘Photograph’ movie: Director Ritesh Batra and lead actor Sanya Malhotra talk to us at Sundance Film Festival 2019
‘Blinded by the light’ interviews and post-screening reaction at the Sundance Film Festival 2019 →