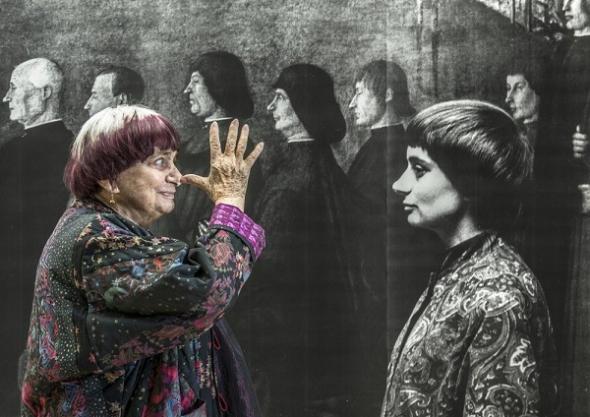 Last documentary about herself is fun and insightful…

FEW women have had such a wide and joyous impact on film as the French filmmaker Agnès Varda who died aged 90 in February this year.

Her own documentary, ‘Varda by Agnès’, got a UK release this week (July 19) through the BFI and is screening in selected theatres.

If you’re a fan of film, it is well worth watching – not least because the film gives much context to Varda as a filmmaker and is a final statement of sorts on her life and work.

She wasn’t to know this would be very last work – though in what became her final major interview (to the Hollywood Reporter, ahead of the film’s world premiere at the Berlinale in February), she said she was giving up filmmaking for creating artwork.

‘Varda by Agnès’ covers the high points, has her talking in conversation on stage (in separate sessions and with different interlocutors) and has many clips which show her work and illustrate her oeuvre.

She started out as a photographer, moved into narrative features, then worked on more on quirky and unconventional documentaries, had a stint in Hollywood on the sidelines and through her husband, Jacques Demy (a screenwriter and part of French New Wave in the 1960s) and became a unique voice in documentary filmmaking.

It’s a beautifully constructed and charming film, punctuated liberally by her wit, her sense of play and her strong interest in people and unconventional ways and means – which inspired as a filmmaker and provide something of a route-map to her life and work.

In her director’s statement, she says of this film: “I give me own keys, thoughts, nothing pretentious, just keys.”

There are three major parts: the first, deals with her early work, her first feature, ‘La Pointe Courte’ (1954) and to her final fiction work, ‘One Hundred and One Nights’ (1996).

The second period examines her work in this century when she starts to work with digital cameras, changing her approach to documentary feature-making. There are thoughts about ‘Gleaners and I’ (2000) and the film she made in collaboration with well-known photographer, JR, ‘Faces and Places’ (2017).

In between, in the middle, she says: “There is a little reminder about my first life as a photographer.”

Evocative, personal, amusing, and gently provocative (in places), this is both a marvellous introduction and a telling retrospective and masterclass to the life and work of one of cinema’s most arresting voices.

This year the Cannes Film Festival celebrated her contribution to cinema by using an image of her making her first feature as its poster. In the Toronto Film Festival press lounge, there is a huge pictorial mural of her; and both show the esteem and affection by which the filmmaking community holds her.
ACV Rating: **** (out of five)