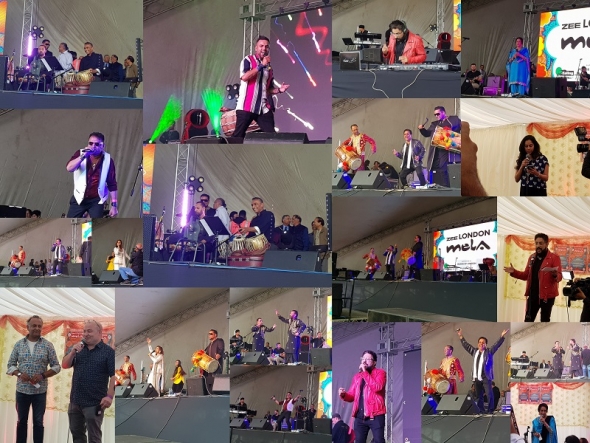 THEY came, they say, and they certainly conquered – but that might have because they were almost playing in their back garden.

The two-day London Mela, held in Southall Park was a trip down memory lane for some, while for others it was an education.
Several of the country’s top bhangra acts descended on what many regard as the spiritual home of bhangra during a special section of music at the now two-day London Mela yesterday (August 18).

Bhangra supremo and the man credited with the giving the musical genre a structure and path to breakthrough, Kuljit Bhamra OBE, brought together many of the great acts of yesteryear and a couple of current artists still maintaining bhangra’s rich traditions.

Compered by stage host Bobby Friction, and BBC DJ, the 80 minute live concert extravaganza was a reminder of how bhangra came out of a community and the fields of Punjab and onto the streets of Southall in London, and Handsworth in Birmingham.

Among those performing the Sounds of Southall were Mohinder Kaur Bhamra, first credited with taking bhangra out of Gurdwaras and private functions – Premi, Heera, Channi Singh OBE of Alaap, daughter Mona and the concert finished with well-known contemporary bhangra artist, H Dhami.

Friction has also made an hour-long documentary for the BBC about the origins and development of bhangra in Britain. It was shown to revellers at the London Mela at the close of the concert and will be broadcast across BBC channels, starting later this week.

Earlier, Virendra Sharma, Ealing and Southall MP, Omkar Sahota, London Assembly Mayor and the Mayor of London Sadiq Khan’s representative and Tejinder Dhami, the Mayor of Ealing, welcomed the crowd to the park and hailed the mela as ‘coming home’.
In previous years, it has been held at Wembley Park and Gunnersbury Park but the London Mela grew out of a mela first hosted in Southall Park.

At a reception welcoming guests and sponsors, and hailing the Mela as a great multi-cultural celebration, Ajay Chhabra and Julian Rudd, co-artistic directors thanked sponsors and supporters.

The guests also heard from Zee TV, the main sponsor.

The Mela continues today (August 19) with the emphasis on more contemporary sounds – one of the highlights will be popular Asian crooner Arjun playing with the classically inspired London Mozart players.