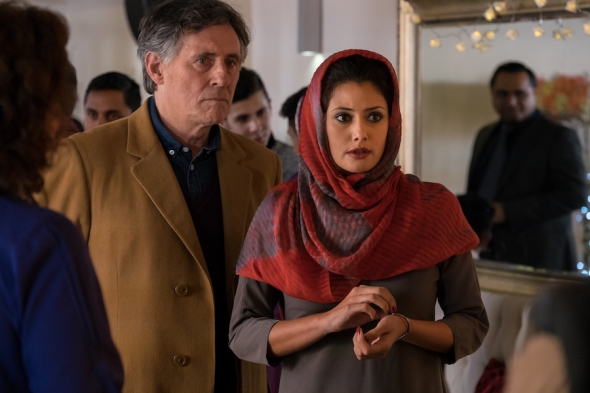 MITU MISRA is not your typical first time director, if there can be any such thing.

His first film, ‘Lies We Tell’, which opens today (February 2) has a stellar cast and includes Gabriel Byrne, Harvey Keitel and even a cameo from Gina McKee.

It isn’t for the feint-hearted or should that be, the politically correct.

About an upwardly mobile young Muslim woman, who is on the verge of a glittering legal career and has an older lover who is also her sponsor, it will ruffle some and is meant to – Misra assured us.

Amber’s (Sibylla Deen) family are horrified but they also hold secrets and are conflicted – in this way, Misra goes to the heart of the commonly portrayed ‘culture clash’.

“My Muslim friends are split,” Misra told www.asianculturevulture.com. “Fifty per cent of them feel I have betrayed them, 50 per cent say it’s about time things like this were faced up to by the community.”

Bryne plays Donald, a kindly paternalistic driver, who crosses paths with Amber (Deen) because she was Keitel’s (Demi) tycoon character lover – he his faithful driver. The older man and the beautiful, smart, intelligent, vulnerable young woman is a common film trope – but Misra avoids the romantic connotations or cliches, and goes for something deeper and more political, in a sense.

Brought up in Bradford, and where he made a fortune in the double glazing business, his first film is a troubling sort of love letter to his home town and the communities he loves in equal measure.

He has a powerful message both for the Muslim community and the local white one there who might feel that multiculturalism has gone too far – of course, like any reasonable person, he wants better understanding, but unless both sections talk openly and frankly, it won’t happen, he intimated.

His film, which is an entertaining and absorbing and high end production, is a plea to address issues, confront them, and not be scared about talking about sensitive matters and ringing changes in the cultures. You can just watch the film as a straight thriller without delving into the cultural politics but it gives the film more force if you do.

“I am hoping non-Muslims will understand (Muslim) culture a bit more and there is less finger pointing at them (as a community), at the same time, the very same people they are pointing at must recognise that they themselves are probably the cause of the demonisation for the way they are following their faith.”

In the film, the classic first versus second generation split is amply illustrated – Amber, the central character, wants to lead an independent existence and make her own decisions. There is nothing in her faith, she believes that says differently but her parents have a set of different assumptions.

“She wants to live her life and be loyal to her family and not live the rest of her life in guilt,” Misra argued.

It is a not an unusual conundrum and one many South Asian families (not just Muslim ones) can recognise.

“It would have been easy to make a film about the girl that just runs away,” Misra said.

His path to filmmaking has been a long one – some 10 years since he seriously started to think about making a film. He didn’t even know what a boom (to record sound) was and had never been on set before enrolling at a film school in London just a while after 7/7.

“The story is based on about four or five real events in Bradford,” he pointed out. “And I had been dying to say something about them in some way, shape or form.”

Then, he wanted someone else to direct it – he first approached the iconic South Indian director Mani Ratnam (whom he already knew), among others. But Ratnam said the script was personal and that Misra alone had the vision for it. He did offer help and put him in touch with Santosh Sivan, another iconic name in Indian cinema, and he agreed to become Misra’s director of photography and it shows.

This is not a cheap production and the acting is of a high standard too. It has an important message and deals with themes that are very live in South Asian communities.

Most of all ‘Lies We Tell’ is also a bold and courageous way to say to some in the Muslim community and some who bitterly oppose them that the more they accuse each other, the less hope there is, of creating a society at ease with itself.

Misra said the ‘Donald’ character is based on a real driver he had and the spark of the story emerged when this driver had a run-in with someone very similar to the Amber character in the film.

“He simply did not know how to deal with it.

“The very next day was 7/7 and I saw some people seriously joyous in the fact that it happened,” he lamented.

And so, his film began out of that indignation and the desire for others to understand it was not Islam that made them react that way.

“It’s about the practice of Islam, some people’s interpretation. It is a beautiful and fantastic religion but its practice and following for some is helping those who want to demonise it,” he posited. “There’s rank hypocrisy,” he claimed.

He knows some people are not going to be happy, but he has a clear sense of what he is trying to do himself.

“I haven’t made this film to make money or be famous or for search for a trophy wife,” said the already-partnered Misra. “My romance with Bradford died on July 7. Before that, I felt we were going somewhere, that’s when I realised we are going nowhere.”

Perhaps the Bradford of his youth is gone, but his film is a like a warning – if people don’t want to engage in dialogue and change, what might come next for all of us, could be a lot worse.

Privacy & Cookies: This site uses cookies. By continuing to use this website, you agree to their use.
To find out more, including how to control cookies, see here: Cookie Policy
← Venice 2021 (wrap): Awards for ‘Happening’; Penelope Cruz; Jane Campion, Maggie Gyllenhaal, Erik Matti; John Arcilla and Paolo Sorrentino’s ‘The Hand of God’ among others…
Venice 2021 (video): Bengali star actor Sreelekha Mitra – “Sometimes a woman can manipulate a man and if she wants it to be physical, it’s her choice” →