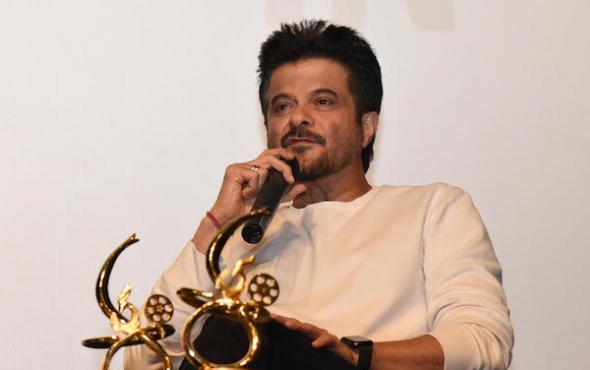 ONE OF BOLLYWOOD’S most enduring stars Anil Kapoor shared some of the secrets of his success – well, maybe not secrets – but sharing it certainly was.

Speaking at the International Film Festival of India (IFFI) in conversation series yesterday (November 22), he told the audience his longevity had been maintained by always dedicating himself to the character and nothing else.

He spoke about the directors he had worked with – including Anees Bazmee who was on the stage with him in Goa for the IFFI talk.

The pair have done 10 films together and have mined the area of Bollywood comedy very successfully.

Kapoor also talked about the actors he admired – James Dean, Marlon Brando, Raj Kapoor, Shashi Kapoor, and a host of newer names too got a name check.

About 2/3 of the talk was in Hindi and Kapoor discussed some of the films that have made him a star since acting in his first film in 1977.

He mentioned ‘Slumdog Millionaire’ and playing the memorable host of the game show, ‘Who wants to be a Millionaire?’ – he wasn’t the number one choice for British director, Danny Boyle but made the part his own and he emphasised that this had been his guiding light as an actor – imbue the character, always and every time.

We will have the best bits of video from this talk …

Also we will look at a talk from Film Bazaar and there are more star and personality interviews to come…stay tuned to the Bird!

Privacy & Cookies: This site uses cookies. By continuing to use this website, you agree to their use.
To find out more, including how to control cookies, see here: Cookie Policy
← UK Asian Film Festival 2019: Struggle not submission – Southall Black Sisters 40 years and drawing the dots between then and now…
UK Asian Film Festival 2019: ‘Ek Asha’ (review) – transgender as it is… →