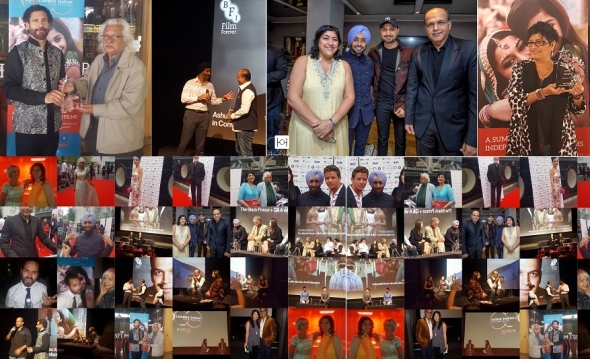 ♦ Shakti and the early works of Pratibha Parmar – celebration of the LGBTQ+ British Asian experience with screening of short films such ‘Sari Red’, ‘Khush’ and ‘Brimful of Asia’.

– Unfortunately there is a technical glitch with captions  – which prevents them being attached to the pictures, see below

Presenter Kiran Rai (Pic 23) seen here with Mumbai-based actor Pooja Sawant was on the red carpet at LIFF and it followed on from last week’s red carpet launch of the Calum Best film, ‘Dangerous Game‘ – where Rai was also interviewing the stars to camera. The film which also features Amar Adatia ‘Gangsters Gamblers Geezers’ 2016) is available from Amazon from Thursday (June 29), and Rai interviewed other media TV personalities who appear in the film, including pin up Lucy Pinder, actor Darren Day and mixed martial arts star and former Katie Price flame, Alex Reid.